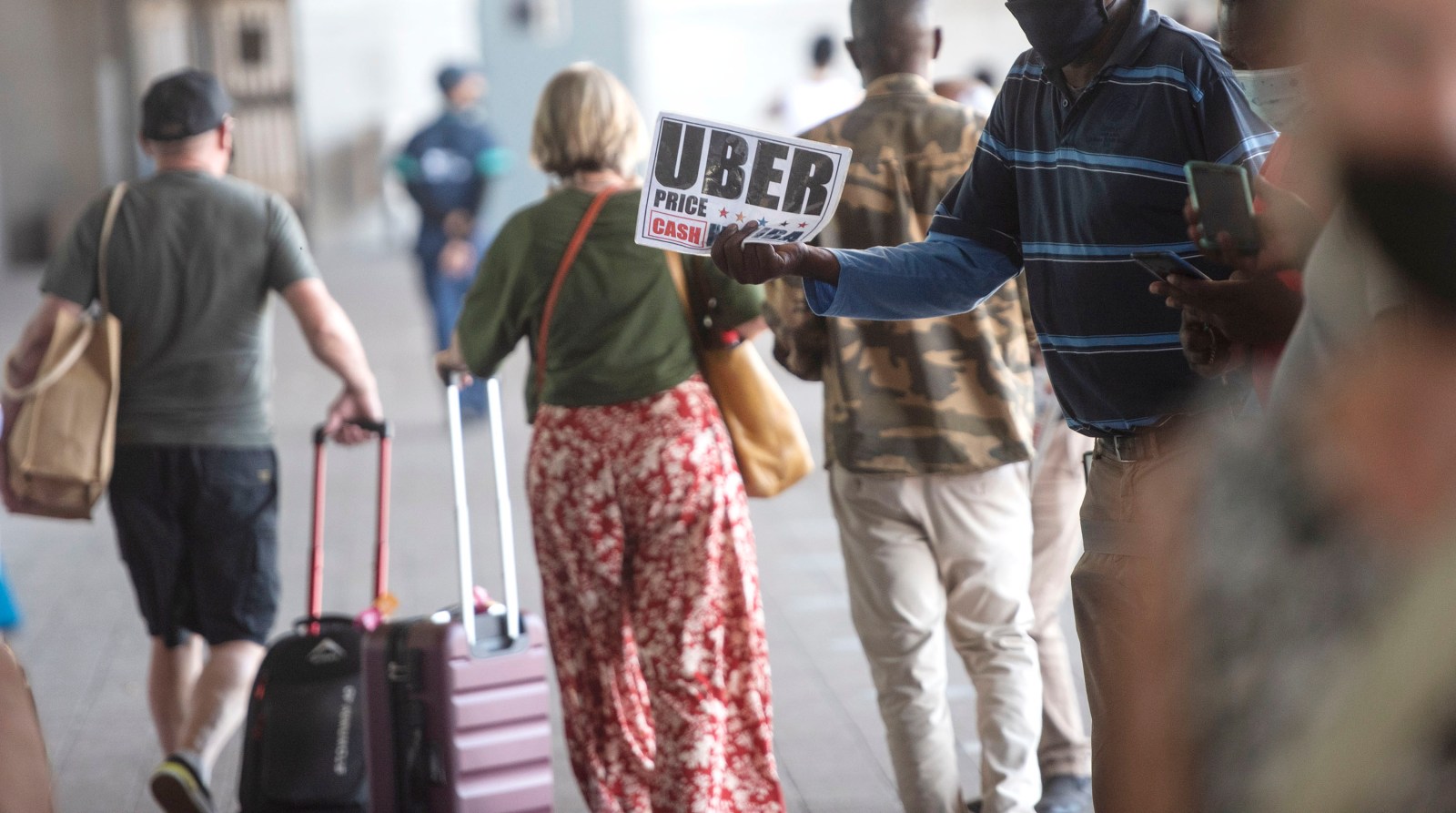 In light of the proliferation of unauthorised taxi operators at Cape Town and OR Tambo international airports, Daily Maverick asked readers to share their own encounters with taxi drivers at South African airports. In most cases these fake e-hailers were accused of harassment, with one reader saying he was accosted aggressively.

The airport experience is usually a harried one. Between keeping track of your bags and documents, avoiding collisions with unwieldy trolleys and processing overstimulation in the form of shifting signs and crowds, you are often only too eager to exit the terminal into the world beyond.

The presence of unauthorised taxi operators in and around Cape Town International Airport and OR Tambo International Airport has only been adding to some travellers’ stress, according to accounts sent to Daily Maverick by our readers. Relaxed Covid-19 restrictions and the resultant increase in airport traffic have led to a rise in the number of these illegal taxi operators, or “touters”, at the terminal in recent months, many posing as e-hailers to lure passengers.

In January 2022, Paul Clark, who divides his time between the UK and South Africa, arrived at Cape Town International with his wife and son. They were returning from a trip to Durban.

Clark made his way to the Uber pick-up point with his family. As he passed through the group of unauthorised taxi operators holding Uber signs outside the airport, he commented to one who was waving a sign at him: “You are not an Uber.”

The “touter” proceeded to accost Clark aggressively, swearing at and threatening him. The situation was only defused when the taxi operator’s colleagues dragged him away, said Clark, adding: “This incident took place in a crowded environment with many fellow travellers all around us and was not exactly a great advertisement for those arriving in Cape Town.”

Clark said he phoned the Airports Company South Africa (ACSA) from his Uber on the way home.

“[A]fter spending quite some time trying to get the person at ACSA who answered the phone to understand my complaint, I was put through to an individual whose answering service merely played a recorded message that his ‘voice email box was full’ and the call was terminated,” he said.

Approaching ACSA about the incident, Daily Maverick was told by Mark Maclean, regional general manager at Cape Town International, that the company is “deeply concerned” about Clark’s experience.

“We are also broadening our communication to passengers to ensure that the authorised taxi and shuttle operators are clearly identifiable, and to highlight that e-hailing services are pre-booked online app services.”

People who experienced harassment, Maclean advised, should ask for help from ACSA security or the SAPS in Parkade Two of the airport. Or they could call 021 937 1200 at the airport.

Maclean asked for more details of Clark’s experience in order to find CCTV footage of the encounter. He declined to furnish further information about the incident.

Another reader, who wished to remain anonymous, said the taxi situation in South Africa has become a major problem, to the detriment of the drivers themselves.

“When I fly up to Pretoria, I used to take the Gautrain to Hatfield and then grab an Uber to my destination. I got caught up in an altercation between three taxis and my Uber one Saturday evening in December 2018. As a single female traveller it was a horrendous experience,” she said.

“Not being able to rely on this seamless system anymore makes travelling a lot more complicated and it’s to the detriment of our transport system, as we no longer use them and seek alternative solutions.”

Klaus Wiswedel, a doctor living in Hout Bay, flies regularly from Cape Town to Johannesburg and Windhoek. Each time he returns he is harassed by fake Uber drivers.

“[E]very time there are at least 20 touting for business and no airport security in sight. I think they are scared of confronting these rogue taxi operators as it is everywhere and taxi operators are making their own laws,” said Wiswedel.

A fellow frequent flyer, Nico Brandt from Johannesburg, said fake e-hailers are “seriously harassing” customers, and he called for urgent action to address the problem. Unauthorised operators should either join Uber or a taxi association, he said.

However, in September 2021, the President reportedly declined to sign the bill into law, citing reservations about its constitutionality.

While taking an accredited taxi home from the airport on 18 February 2022, Elizabeth van Heyningen, an honorary research associate in the history department at Stellenbosch University, listened to her driver complain about “touters” at the airport.

“I feel, now, that I was rather unsympathetic, both because all drivers have had a hard time and there are costs involved in becoming accredited, but also because I didn’t take his complaints very seriously,” said Van Heyningen.

As an elderly woman travelling alone, Van Heyningen prefers to use a recognised transport service. However, she added that her heart and head are in different places – she wants to be driven by a person who is safe, but also grieves for the desperate seeking work.

Paul Robertson, a retired high school principal living in Cape Town, had a favourable encounter with a touting driver. After he and his wife arrived in Cape Town very late at night, he accepted an UberX quote of R141. However, the app took a long time to assign a driver, so he approached an independent operator.

“He asked if R250 would be okay. It was less than I had paid in pre-Uber times, and as there was still no Uber driver assigned by the app, I accepted, and cancelled my Uber request. He helped us load and took us home,” said Robertson. DM