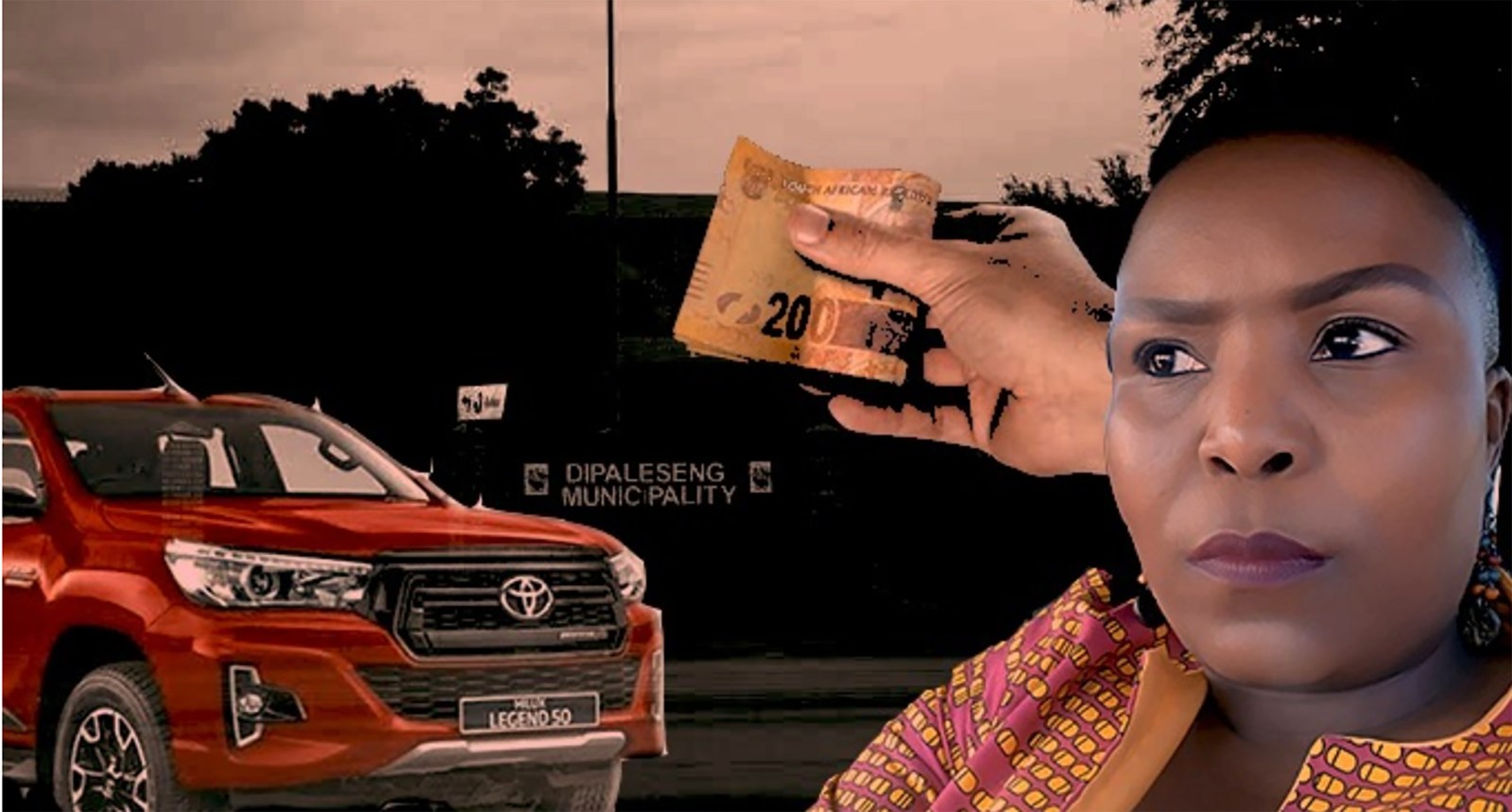 A Section 106 report released by Cogta MEC Busi Shiba has blown the cover off grand-scale corruption in a municipality in Mpumalanga, leading to a discovery of how the mayor of the cash-strapped and near-defunct Dipaleseng municipality in Balfour received a brand-new Toyota bakkie from a service provider who had been awarded a dodgy security contract. (Graphic: 013NEWS)

An investigation indicates that a new, high-end Toyota bakkie was bought by two tenderpreneurs for the personal use of Dipaleseng mayor, Khethiwe Moeketsi.

A Hilux Legend 50 was allegedly bought for mayor Khethiwe Moeketsi in 2020 by tenderpreneurs who are implicated in an investigation. Moeketsi was speaker of the Dipaleseng municipality at the time.

A report on the investigation was recently released by co-operative governance MEC Busi Shiba. It now awaits an “action plan” from the Dipaleseng municipality in Balfour, Mpumalanga.

The forensic investigation, covering the period between June 2019 and July 2020, found that close to R100-million was lost to fraud, corruption and bad governance at the Dipaleseng municipality.

The tenderpreneurs who bought the vehicle for the mayor — Ishmael Nemukula and Zwivhuya Mushanganyisi — are from Limpopo province. They own a company called Clear Point Security & Hygiene Services, which was awarded a three-year contract to guard assets at the Dipaleseng municipality, beginning in November 2019.

In October 2020, the red Hilux bakkie was delivered to Moeketsi, who was council speaker at the time. The car was bought from East Rand Toyota in Gauteng by Nemukula and Mushanganyisi through Clear Point Security.

The probe’s report shows that officials at the Dipaleseng local municipality “insisted” on hiring Clear Point Security — choosing it from 23 other bidders and “using reasons that were not truthful” when rejecting the other companies vying for the lucrative R20-million contract.

The bakkie was bought for Moeketsi a few months after Clear Point Security was awarded the contract.

According to documents seen by 013NEWS, the bakkie changed ownership three times in a single day. When it was bought at East Rand Toyota, the vehicle had Gauteng number plates. It then got Limpopo plates when ownership was transferred to an insurance company.

“From the insurance company, it went on to be owned by Clear Point Security and immediately it was transferred into Khethiwe Moeketsi’s name and had Mpumalanga number plates on 21 October 2020,” a source said

Apart from being mayor, Moeketsi is also a regional executive committee member of the ANC in the Gert Sibande region and a close ally of regional chairman Muzi Chirwa, who is eyeing the position of ANC provincial secretary when the 13th elective congress is finally held.

Moeketsi failed to answer questions sent to her via WhatsApp earlier this week about whether she had proof of payment for the vehicle.

Nemukula and Mushanganyisi similarly ignored our questions, as did Dipaleseng council’s former chief financial officer Clement Letsoalo, who reportedly facilitated the purchase of the vehicle.

Freedom Front Plus municipal councillor, Carel Pienaar, said everyone in the community knew about the vehicle being given to the mayor, and that it was unfortunate because “this matter happened outside of the scope of the current 106 investigation report”.

“A new investigation into this needs to be launched,” Pienaar said, adding that the probe should look into why a service provider would buy a car for a council speaker.

“It is highly suspicious when a contractor buys a car for a sitting speaker,” Pienaar said.

Municipal spokesperson Phindile Sidu said action would be taken following the release of the investigation report on 10 February 2022. DM