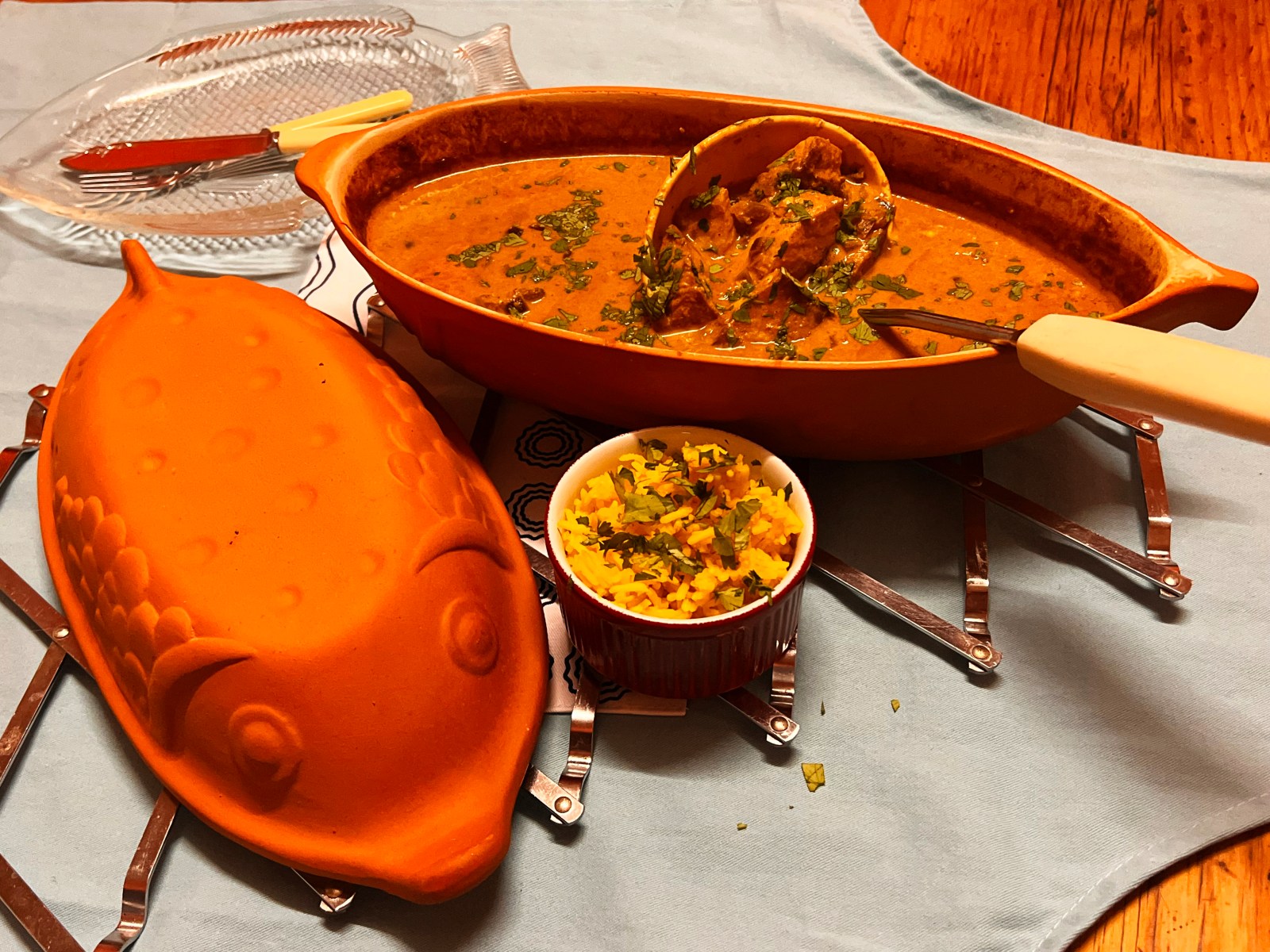 A fish curry cooked in a clay pot is wonderfully satisfying. First, if you don’t own one, you need to make a really lucky score at your local second hand store. Like I did this week.

I spotted it from the other side of the room. I say “room”, but More4Less in Cradock is more like an aircraft hangar packed with the whole world. Long and low, terracotta, and somewhat fishy. A fish-shaped terracotta clay cooking pot. I had to have it.

It was marked R120 but I bargained them down and got it for R100. When I got home I turned it around and saw the word Jonas on one end. A quick google and up comes “rare vintage Jonas gourmet terracotta clay pot fish cooker”. And a photograph of the identical pot. On eBay. Asking price: R911.70. I felt bad for having bargained them down by R20.

It appears unused, or otherwise kept in pristine condition with great care. So there had to be fish for supper that night. So it’s been used now.

If you’ve used a Romertopf clay pot you’ll know the drill: put the top and the bottom halves of the clay pot in the sink, fill it with cold water and leave it for at least half an hour before draining and drying. Then, it goes into a cold oven, which you only switch on once you’ve popped the clay pot in.

But first, because this is a fish curry, you need to start the dish on the stove top in another pot…

Most of the cooking is about the sauce. The fish is only added for brief cooking near the end.

Put the two halves of a clay pot in the sink covered with cold water for half an hour, then drain and dry.

Put a chunk of tamarind pulp in a small bowl covered with cold water. After a few minutes, use a fork to pummel it so that most of it dissolves in the water. Keep it to one side.

Simmer the onion in coconut oil in a heavy pot until softened. Mix all the spices together and stir them in. Cook gently for a couple of minutes.

Add the tomatoes and coconut cream and strain the tamarind water in. Season with salt and white pepper and simmer for about 15 minutes for the flavours to develop.

Pour the sauce into the clay pot, put the lid on, and put it in the cold oven.

Turn the oven on to 180℃. Once the oven is hot, cook it for about 20 minutes or more so that the curry sauce is hot when you put the kingklip in.

Remove from the oven, add the kingklip (or other firm white fish) chunks, quickly put the lid on again and bake for another 20 minutes or so or until the fish is just cooked through. Serve with basmati rice cooked in water containing 1 tsp of ground turmeric and a little salt. Garnish with coriander leaves. DM/TGIFood