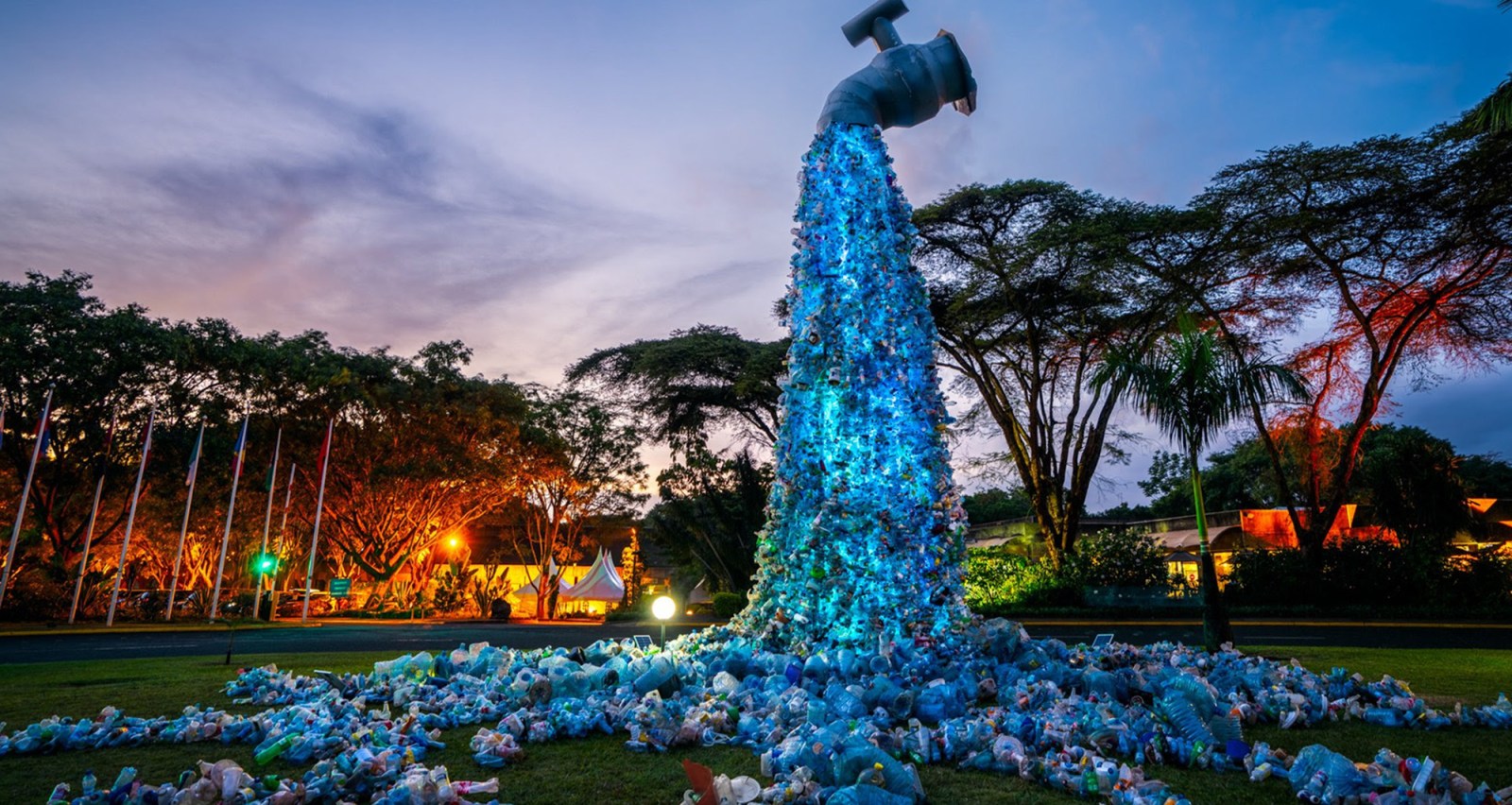 A torrent of waste plastic pours from a tap in this artwork by Benjamin Von Wong, erected at the entrance to the United Nations Environment Programme headquarters in Nairobi. (Photo: Benjamin Von Wong)

Leaders at the United Nations Environment Assembly are confident they’ll reach an agreement to curb the growing volume of plastic waste. That’s despite pushback from industrial interests.

Speaking in Nairobi at the start of the fifth UN Environment Assembly (Unea 5.2), assembly President Espen Barth Eide said: “I have a good feeling about this” in reference to negotiations under way in the Kenyan capital to initiate the first legally binding treaty dedicated to reducing global plastic pollution.

Eide, who is also the Norwegian minister of climate change and environment, said he had taken note of media reports that the hydrocarbon industry was seeking to water down the text of the Unea plastics resolution due to be presented to ministers for adoption on Wednesday.

In his view, however, Eide said the text of the resolution had, if anything, moved from being “weaker to stronger” following a meeting of negotiators at the weekend.

“I’ve seen this [issue] in the media, but it’s not particularly visible to those negotiating the treaty. When you make clear what is acceptable and what’s not, business will follow suit,” he asserted, adding that business interests were nevertheless anxious that the proposed treaty created a level playing field in which all countries had to abide by the same rules.

Unep executive director Inger Andersen — who recently expressed the hope that a new treaty could be agreed to within the next two to three years — recalled that there had been strong opposition from the hydrocarbon industry two decades ago over plans to ban lead additives in petrol.

Yet, despite this opposition, the last litre of leaded petrol had been pumped last year due to a 19-year campaign by Unep to ban brain-poisoning tetraethyl lead from being mixed into petrol to boost engine performance.

“We have every faith this can be done [reducing plastic pollution],” Andersen said in response to questions at an online media briefing on Monday.

It remains unclear what final shape the proposed final treaty might take. Rather than seeking to ban plastic outright, the main emphasis of the deal is likely to focus on redesigning the plastics and packaging industry to ban single-use (throwaway) plastics and also create incentives to dramatically increase the level of plastic recycling.

But that’s easier said than done, considering that a recent Unep report calculated that less than 10% of plastics used in the packaging industry is currently recycled at a global level.

The Unep report “From Pollution to Solution” estimates that 40% of the world’s plastic packaging ends up in landfill sites, 32% is dumped into the environment, 14% is burnt in the open or incinerated and just 14% is sent for recycling — and of this latter percentage, at least 4% was not suitable for recycling.

Eide argued that it was entirely feasible to remove certain substances from production without crashing economies.

“My refrigerator is still running very nicely,” he remarked, despite initial industry opposition to the global phase-out of CFCs, a class of chemicals that tear holes in the world’s protective ozone layer.

“We know it’s a daunting task — as plastic is all over the world… but it’s not smart to have a resource and just throw it away. It makes much more sense to keep using it,” said Eide.

Andersen, writing separately on the Unep web page last week, has called for an ambitious timetable to reach a global agreement by setting up an intergovernmental negotiating committee to work towards a legally binding global instrument.

“I am confident that member states will decide on the path forward that makes a real difference to address plastic pollution,” she said, suggesting that negotiations could be completed in time for the Unea’s sixth assembly in 2024/2025.

“This would make for a highly ambitious timeframe, reflecting member states’ understanding of the urgency to make progress on this critical environmental challenge.”

Discussing the types of possible enforcement mechanisms, Andersen said this could include new compliance committees or verification processes similar to the Basel Convention on the Control of Transboundary Movements of Hazardous Wastes and their Disposal.

Mechanisms to review compliance by member parties in such treaties were typically “non-confrontational, non-judicial and consultative [in] nature.

“Whatever the modalities arrived at by countries, it is critical that they create sufficient incentives for multiple stakeholders to benefit from a new global plastics circular economy. This then flips the emphasis — from enforcement to creating an enabling environment where it is in everyone’s interests to implement the agreement.

“If the agreement creates the right enabling environment for catalysing a new plastics economy, then we will have a process that works for the economy and meets environment and social objectives in tandem.”

Andersen also sought to downplay the likelihood of a plastics and hydrocarbon industry pushback.

“The scope of industry and private sector entities involved in this topic are vast, with wide business interests. While positions are varied, a general recognition is growing for the need for global, collective actions. Across the board, industries contributing to plastic pollution need to do better, and we are seeing evidence that this is happening — however, it is not happening fast enough to reverse or halt the plastics pollution crisis.”

She said that in terms of the Ellen MacArthur Foundation/Unep Global Commitments for Plastics, a large number of businesses and countries were supportive of a global agreement on plastic pollution, recognising that voluntary initiatives alone would not be enough.

The International Council of Chemical Associations and the World Plastics Council had also recognised the need for global action to prevent leakage of plastic into the environment, while a manifesto had also been signed by many of the world’s leading companies in support of a UN treaty on plastic pollution.

“It is clear that there is huge global interest in addressing the problem of plastic pollution through multilateral cooperation. Since September 2021, according to the WWF Global Plastic Navigator, 154 countries have expressed an interest in negotiating a new global agreement on marine plastic pollution.”

According to Andersen, roughly 11 million metric tons of plastic are dumped into the ocean each year and this figure is projected to double by 2030 and nearly triple by 2040.

In 2018 alone, impacts on tourism, fisheries and aquaculture, with other costs such as those of clean-ups, were estimated to be at least $6-billion to $19-billion globally.

“Even as we continue to flesh out a global agreement, it is clear that we cannot put the brakes on action to address plastic pollution. This is such a big challenge, we need to come at it, through different tracks, all converging on the same road — towards altering our relationship with plastics, therefore benefiting the natural world, in particular, our oceans and water bodies, and human health.”

According to the From Pollution to Solution report, the growing torrent of plastic production also has major implications for climate change.

Using a life cycle analysis, 2015 greenhouse gas emissions from plastics were estimated at 1.7 gigatonnes of CO2 equivalent (GtCO2e) and projected to increase to approximately 6.5 GtCO2e by 2050, or 15% of the global carbon budget.​​

All forms of marine life — from plankton and shellfish to birds, turtles and mammals — also faced grave risks from plastic toxicity of behavioural disorder, starvation or suffocation, while corals, mangroves and seagrass beds were being smothered by plastic waste (preventing them from receiving oxygen and light).

Researchers note that the human body is similarly vulnerable on multiple fronts to plastic pollution in water sources, which could cause hormonal changes, developmental disorders, reproductive abnormalities and cancer.

Greenpeace Africa has urged UN member states to push for a strong multilateral agreement on plastics at the Nairobi meeting.

“African governments must resist the corporate capture by plastics proponents and take bold actions towards negotiating for a global plastics treaty that encompasses the full life-cycle of plastic from production to disposal,” Greenpeace Africa spokesperson Erastus Ooko said. DM/OBP