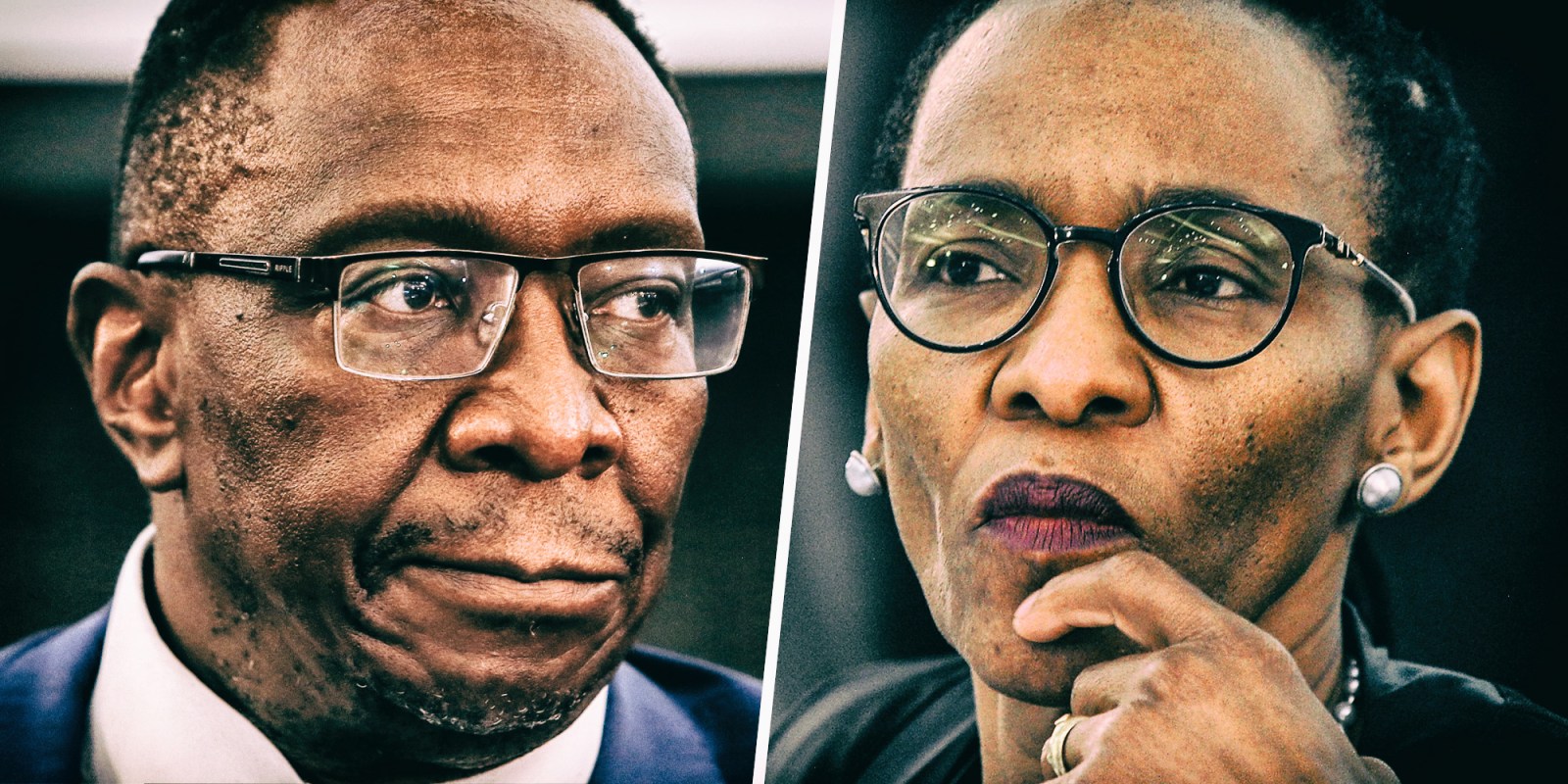 Claims have emerged that Supreme Court of Appeal President Mandisa Maya repeated allegations that her rival for the position of Chief Justice, Gauteng Judge President Dunstan Mlambo, was implicated in sexual harassment.

Two sources have alleged that the Supreme Court of Appeal (SCA) President, Judge Mandisa Maya, personally repeated the allegation that her rival for the position of Chief Justice, Gauteng Judge President Dunstan Mlambo, was implicated in sexual harassment.

The allegations against Mlambo, which have not risen above the level of rumour, burst into the open when Judicial Service Commission (JSC) commissioners Dali Mpofu and Julius Malema raised them during Mlambo’s interview on 3 February.

Maya declined to respond to 14 points put to her by amaBhungane, including a claim that she had “on more than one occasion… conveyed allegations that Judge Mlambo was implicated in sexual harassment to influential colleagues/acquaintances”.

During Mlambo’s interview, Mpofu, while acknowledging he was not aware of any formal complaint against the judge, publicly raised what he described as a “whispering campaign” linking Mlambo to sexual harassment, while Malema alleged there were claims that Mlambo had attempted to extract sexual favours in return for appointing women as acting judges.

Mlambo categorically denied all these claims.

According to Mlambo’s account, the first he heard about these rumours was through a concerned colleague.

“When this Chief Justice nomination process started, I got a call from a retired judge in the Western Cape who said, ‘Hey, I heard a disturbing rumour about you.’ I asked if there was a name. There was not… I feel pained that this rumour found [its] way into my interview… [C]learly its purpose is to poison my candidature.”

The JSC’s acting chairperson, Petse, later ruled that the sexual harassment rumours should be expunged from the record, given that Mlambo had not been forewarned that such a serious matter would be raised, coupled with the fact that no concrete information about it had been submitted to the commission.

A senior advocate told amaBhungane he viewed the way Mlambo’s interview proceeded as “one of the most savage character assassinations in democratic South Africa’s judicial history”.

The JSC controversially voted to recommend Maya as its preferred candidate to President Cyril Ramaphosa, despite some legal scholars arguing that this went beyond its constitutional mandate. Ramaphosa never asked the JSC to make a recommendation and legal experts including the former Public Protector Professor Thuli Madonsela, and Lawson Naidoo, the executive secretary of the Council for the Advancement of the SA Constitution, have been quoted as saying that the JSC overstepped its constitutional reach in making a recommendation.

The JSC’s recommendation came in the wake of renewed criticism about the manner in which the interviews were conducted, including the fact that the candidates appeared to be treated unequally by the commission.

Ramaphosa has yet to announce his decision.

Now claims have emerged that Maya personally mentioned, on separate occasions, similar rumours about Mlambo to two influential persons ahead of the JSC interviews for the position of Chief Justice where she and judges Mlambo, Mbuyiseli Madlanga and Zondo were being interviewed.

Amabhungane has been told of two instances: one case last year before the call for nominations and the second about a month ago.

One of these individuals confirmed directly to us that this occurred and the second individual — whose identity was withheld — confirmed the allegation against Maya via a trusted source. Both parties wanted to stay unidentified for professional reasons.

In the absence of any evidence or formal complaints about sexual harassment against Mlambo, it becomes probable that a source of the rumours may be the distortion of facts around his intervention in about 2019 to assist two female judges in his division who approached him with allegations that they had been sexually harassed, but by another judge.

This matter was mediated by retired Constitutional Court judge Bess Nkabinde at the request of Mlambo.

If Maya had misinterpreted the facts, she may have realised her mistake when Mlambo referred to this incident during his interview and could arguably have stepped forward to disclose her alleged role in repeating the rumours.

This was among the propositions that amaBhungane put to her that she declined to answer.

Mlambo revealed at his interview that two female judges approached him alleging that they had been victims of sexual harassment at the hands of another judge. The women did not wish to lay a formal complaint, and they requested Mlambo to facilitate an informal process for them to be heard and the matter resolved through dialogue to the extent that it could be.

Mlambo approached Nkabinde to assist, which she did.

Nkabinde told amaBhungane, “[Judge Mlambo] called me, I was in Mafikeng, but I agreed to his request.”

She said, “I met the two women at their court and they explained their experiences. They did not wish to lay a formal complaint, but they wanted a hearing from a fellow female judge. I engaged in a process with them and the matter was duly settled. [Judge Mlambo] was only involved to the extent that he facilitated setting up the necessary help for the ladies.”

Mpofu, in response to a question asking whether he was aware that Maya had allegedly repeated the rumours to colleagues ahead of the JSC interviews, told amaBhungane: “No. I had no knowledge of this. I am also certain that my own sources of the allegations did not include Justice Maya. I indicated during my questioning [at Mlambo’s JSC interview that] the matter had come up previously and informally in a conversation I had last year with both Judge Mlambo and the current minister of justice from which it became clear that they were both aware of the allegations. You are free to ask both of them. If they deny it, I will reveal the details.”

The JSC’s controversial recommendation that Maya be appointed as the next Chief Justice has raised eyebrows in both judicial and legal circles. Several jurists raised concerns to amaBhungane during the course of our investigation about her past conduct as a judge.

Our sources, which included several senior judges, raised concerns about the fact that Maya appears to have avoided presiding over politically sensitive cases and has a reputation for either delegating these at the outset or recusing herself at the last minute.

“She wouldn’t be seen on difficult cases,” said a senior jurist who wished to remain anonymous. “You won’t find her on a judgment that is difficult politically.”

She, for example, recused herself from the Al-Bashir immunity case and the John Hlophe case. The latter may well be justifiable, as Maya revealed during her interview that she regarded Hlophe as a “big brother”.

One source, a senior colleague, claimed that during her tenure as SCA President, Maya stopped a long-standing consultative process with senior colleagues with regards to making such decisions as potential acting appointments and the competence of judges.

The source said this meant that many such decisions were made individually, undermining a long-held value system of consultation and collaboration at the SCA — and contributed to a view among colleagues that she was a divisive leader.

This was among the allegations amaBhungane put to Maya, to which she declined to respond. DM

The AmaBhungane Centre for Investigative Journalism is an independent non-profit organisation. We co-publish our investigations, which are free to access, to news sites like Daily Maverick. For more, visit us on www.amaB.org