Farmworkers demand wealth tax for the 1% 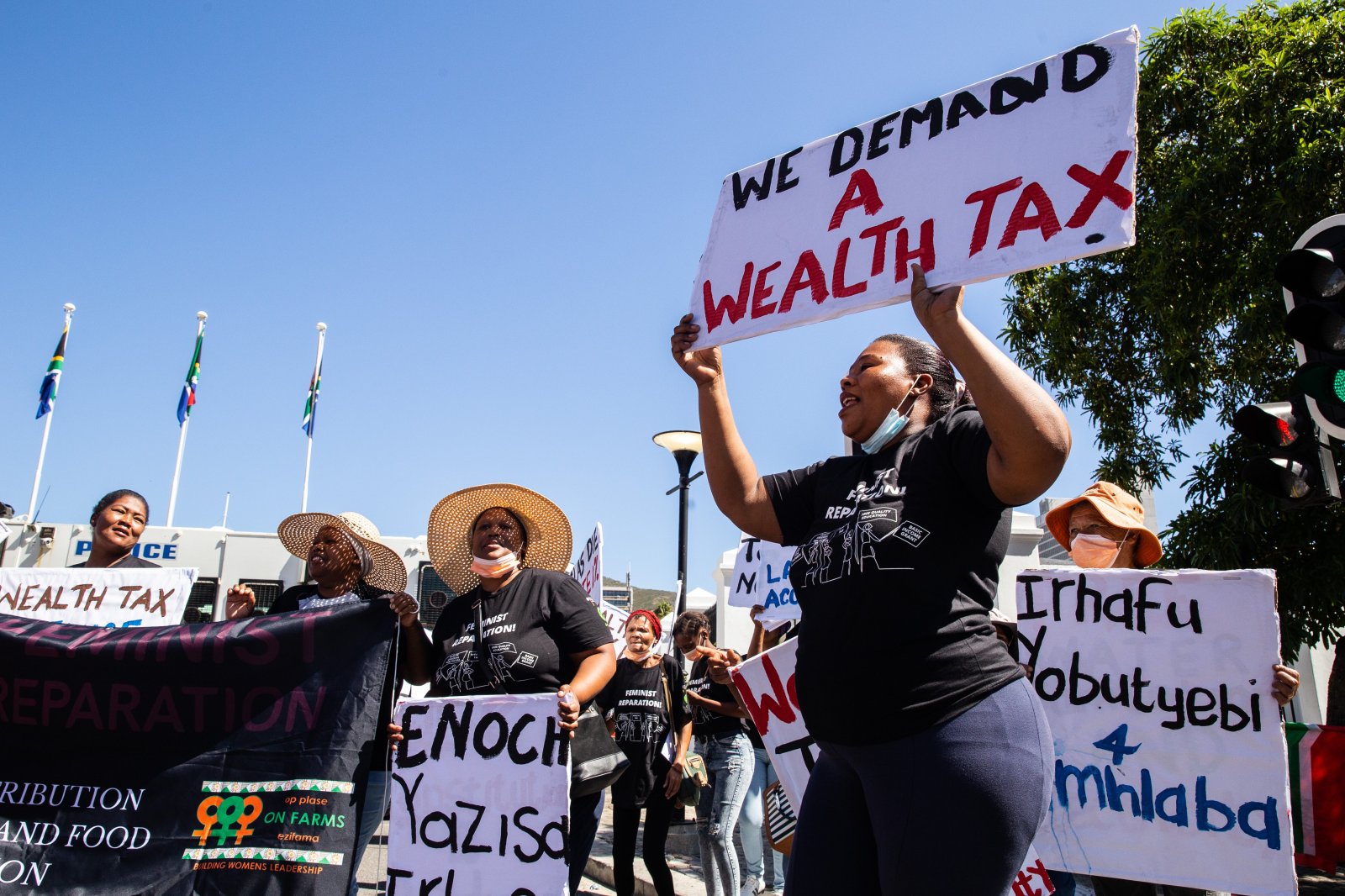 Members of Women on Farms picket outside Parliament ahead of the budget speech on Wednesday. They are calling for the government to implement a wealth tax and for the proceeds to be used to improve access to essential services for rural communities. (Photo: Ashraf Hendricks)

Women on Farms protest outside Parliament ahead of Minister of Finance Enoch Godongwana’s statement.

Women farmworkers from across the Western Cape picketed outside of Parliament ahead of Minister of Finance Enoch Godongwana’s budget speech on Wednesday afternoon.

They called for the introduction of a wealth tax on the country’s richest 1%, saying that the funds should be used to alleviate poverty.

About 30 women who live or work on farms in Stellenbosch, Wellington, De Doorns, Rawsonville, and Paarl held up placards that read: “Enoch introduce a wealth tax” and “Pay wealth tax now”.

According to Women on Farms Project (WFP) who organised the picket, the revenue from the collection of this tax should be used to finance land redistribution and reform, universal quality healthcare, quality education and the Basic Income Grant (BIG) for vulnerable people.

Carmen Louw from WFP said that should the tax be introduced civil society and farm women should have a say in how that money should be spent like having accessible specialised health facilities for women in rural areas. Protesters said this should include funding research and facilities for children with Foetal Alcohol Syndrome (FAS), which is an endemic problem in farming communities.

They are also calling for the special Covid grant of R350 to be increased.

Charmaine King lives and works on vineyards in Stellenbosch. She said that they are struggling to make ends meet with the R350 grant. She said the money is barely enough for food, electricity, and transport.

King said access to healthcare was also a challenge in many communities because it is difficult for farm dwellers who live in remote areas to get to clinics and hospitals. “If you call an ambulance now, it will only get to you tomorrow. We must pay people with cars R200 to R300 to take you to the hospital,” said King.

Janine Petersen, a seasonal farmworker, lives and works on a fruit farm in Wellington. She said they still had to pay electricity and rent with the little they are paid, in the face of rising food prices and other expenses.

She said that many farmworkers don’t have access to clean water or adequate sanitation. “It’s difficult on the farms,” said Peterson. DM