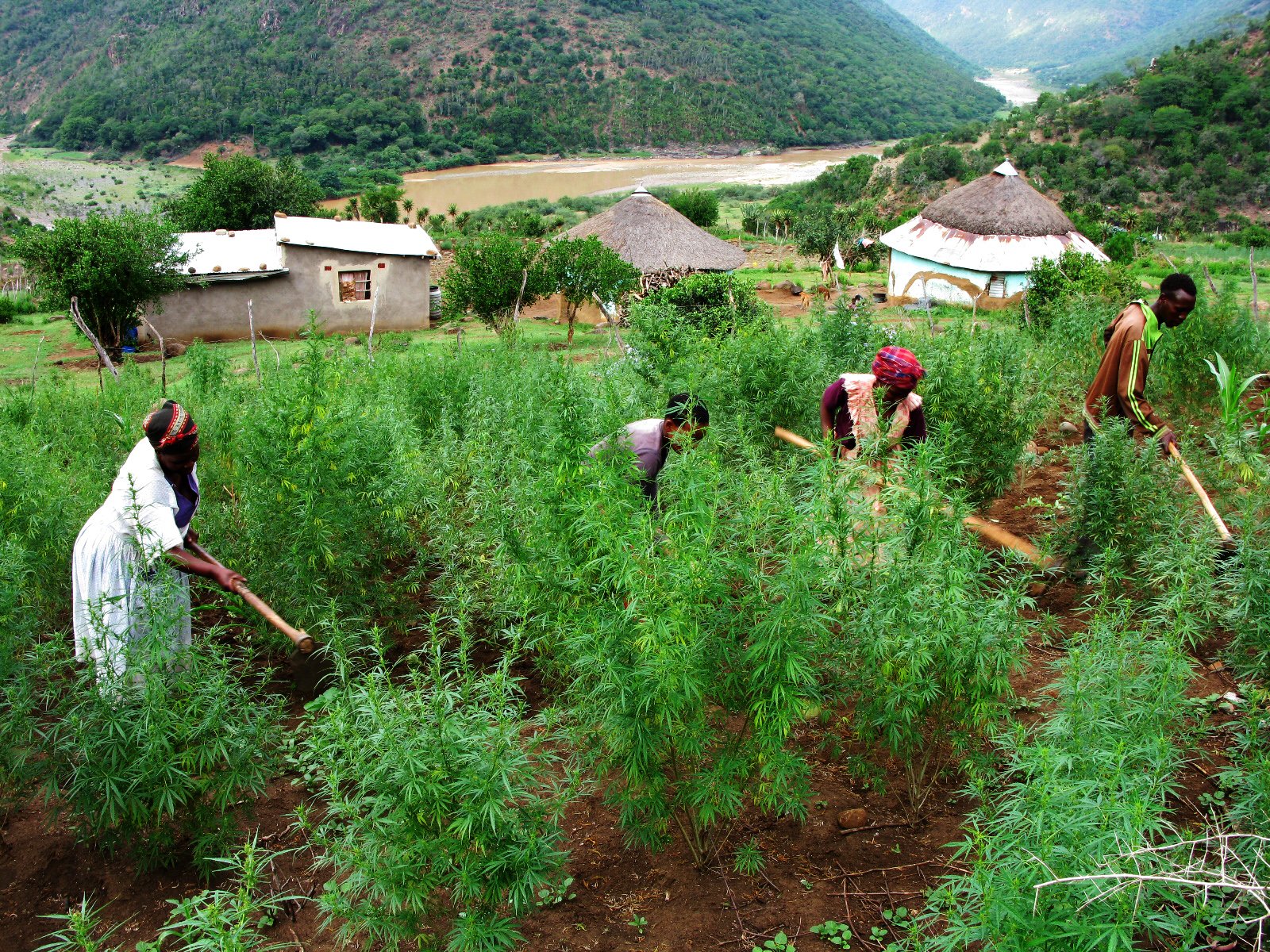 Dagga farming is one of the few forms of livelihood in poverty-stricken parts of the rural Eastern Cape. (Photo: Masixole Feni / GroundUp)

Cannabis producers weed through the challenges facing local producers and how the government’s staggered approach to introducing legislation has affected the industry.

The government’s commitment to industrialise the cannabis industry was backed by President Cyril Ramaphosa in his recent State of the Nation Address. The President justified the stance as part of a broader project “to realise huge potential for investment and job creation”.

This comes after the Constitutional Court ruled to partially legalise the substance for medicinal and personal use in September 2018, and as the Cannabis for Private Purposes Bill of 2020 begins to take its first steps in Parliament.

“I think the announcement indicates a shift, a change in gear from government, and a determination to now actually fully realise the potential of the industry,” said Sibusiso Xaba, co-founder and CEO of the Africa Cannabis Advisory Group. Xaba explained that, despite his optimism, the government’s “staggered approach to introducing cannabis legislation and regulation” over the past few years had posed challenges.

One challenge has been the stagnant roll-out of industry farming permits, according to Kris de Jager, a member of the cannabis analytical laboratory Qure and a founding member of the Cannabis Industrial Development Council of the Western Cape, a cooperative recognised by the Department of Health.

“He mentioned it in 2020 already, and nothing’s been done. We’re still sitting in a situation where our hemp farmers don’t have permits so they can’t plant,” said De Jager.

Potentially the biggest concern emerging from the industry is the lack of clarity on whether smaller local and rural farmers will be left behind if the government follows through on its promise to industrialise cannabis.

For Trenton Birch, co-founder and CEO of cannabis health and education company Cheeba Africa, the most important matter is ensuring that a model is in place for the Eastern Cape and KwaZulu-Natal farmers. “Without that, the cannabis industry is a farce,” argued Birch. He said there was a disproportionate power dynamic between big businesses with large capital that are allowed to grow cannabis, and smaller, rural farmers.

“These guys who’ve been growing in these rural areas [for decades] are still illegal, and they are the people [who] have created a reputation for us globally,” said Birch.

Kwanda Mtetwa, a local cannabis cultivator, medical cannabis activist and owner of craft cannabis brand Cuban Zulu Grows, says: “I would like for there to be an acknowledgement of the smaller-scale grower. There needs to be somewhat of a transferring of the black market into the legal market.”

If government integration initiatives are unsubstantial, and completely different and exclusionary supply chains develop, these farmers will be left out, according to Xaba.

“So many of these places have had to depend on cannabis for decades to send their children to school, to build their homes, to really empower themselves,” said Xaba. “For them not to be at the centre of cannabis reform would be certainly very unfortunate.”

Growers like Mtetwa would like the red tape around the industry to be removed and it made accessible to people from various backgrounds. “They shouldn’t look at medical and recreational cannabis differently.”

While Ramaphosa emphasised the economic benefits of industrialising cannabis, industry insiders are not oblivious to the stigmatisation of cannabis on a sociopolitical level.

“As a recreational means, it is a much better and safer alternative to alcohol,” said Xaba. Here he relies on data from states such as California and countries such as Canada that have fully legalised cannabis. Xaba suggests that “the perception that it’s a gateway drug is completely debunked, because of the decline in the use of hard drugs once cannabis is actually legalised”.

“Whether you believe it’s a gateway drug or not, it’s pretty clear that cannabis has got compelling anti-inflammatory characteristics and is one of the most effective pain treatments available of any kind,” asserted Xaba.

In levelling with anti-cannabis sentiments, De Jager appealed to people’s humanity. “I can understand the typical stoner approaching somebody and they have a negative view on it, but that’s them judging the person before they understand the topic.”

For Birch, the medicinal front makes him optimistic about an increasingly pro-cannabis social trajectory. “I think it’s dissipating every day as people understand that cannabis is medicinal,” he said.

Alongside the medical persuasiveness of cannabis, the potential environmental gains add to its desirability.

“Industrial hemp has got more than 50,000 sustainable end products that can be created and can be substitutes for hydrocarbon-based products that are [damaging] our environment,” said Xaba.

Birch provided another layer to the stigmatisation of cannabis worth considering, one that integrates South Africa’s historical context and current socioeconomic status into our understanding of the problem. “It’s racially politicised here because of our racial dynamics,” he said.

Mtetwa said the lack of faith in local growers to produce a quality product added to the stigma. He suggested this leads to outsourcing, which takes away potential economic rewards from local hands.

“We produce damn good cannabis. We have damn capable farmers,” said Mtetwa. “The whole cannabis community is capable and is able to compete on an international standard.”

He was particularly concerned about the loss of local genetics of our cannabis strains, describing a mentality stemming from these stigmas that is almost classist in its sentiments. One element, he said, was viewing our cannabis as “dagga” and not a high-quality product with medicinal benefits.

“The beauty of a framework that does incorporate them is that there’s so much to learn from these places… that can incorporate into a legal framework,” said Xaba. “They can ultimately… make South Africa not only develop a robust local cannabis economy, but export… some of those landrace strains, which are indigenous to South Africa.”

Birch recommended that the media not blow out of proportion the significance of government actions to reform the cannabis industry, especially making it seem like a get-rich-quick scheme. He argued that too much disunity and toxic competition existed in the cannabis industry. In spite of the uphill battle, he predicts a successful cannabis reformation in the coming years.

Mtetwa has not lost sight of the progress made by the industry and what it means to workers like him. “Almost all of us never thought that this would happen in our lifetime,” he confessed. “So, for me, it’s surreal. It feels like a blessing every day of my life. Hence why, for me, I know that my career, the rest of my working life, is going to be in this cannabis industry.” DM168