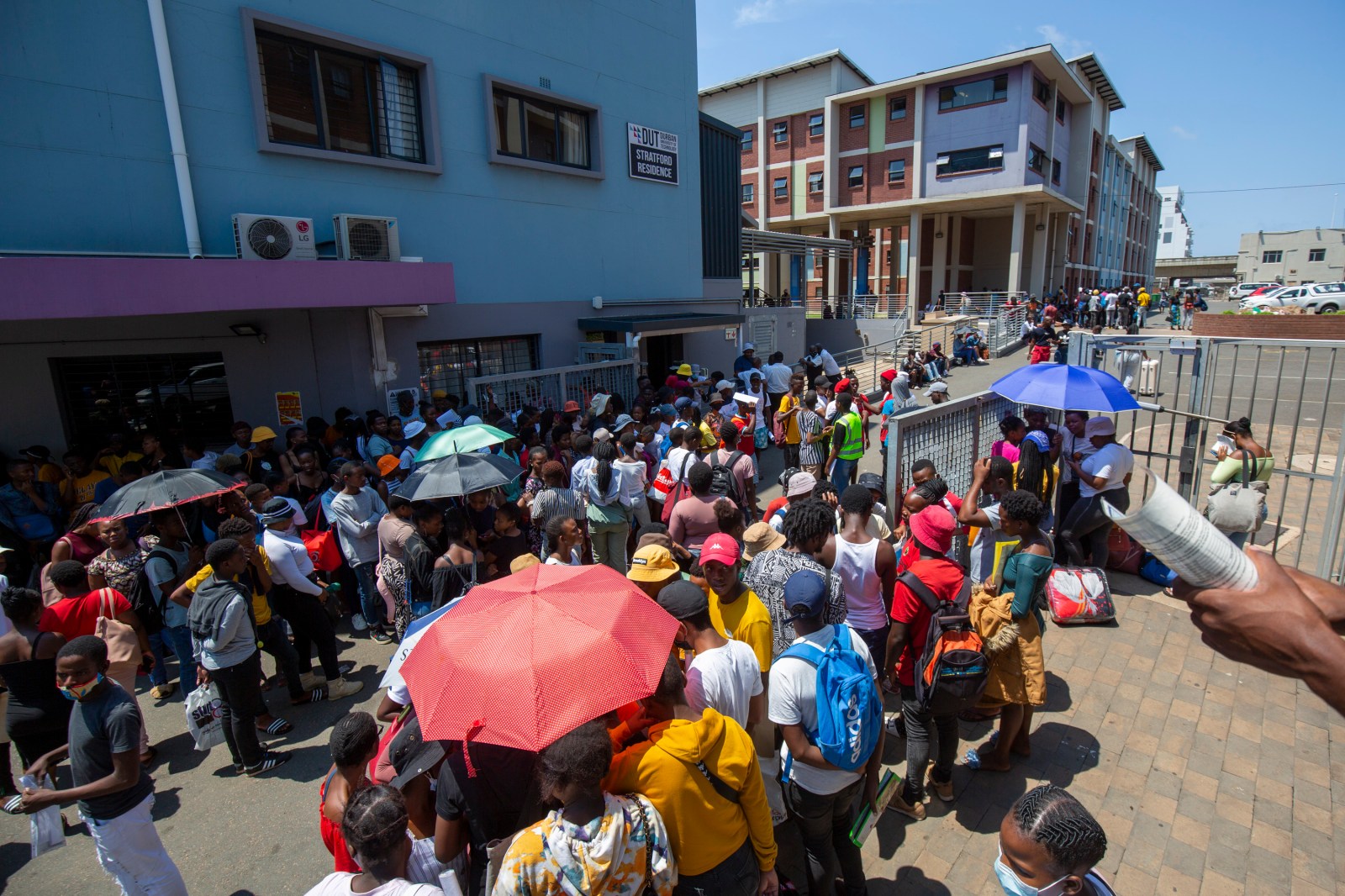 Students queue at the Durban University of Technology after struggling with online registration on 16 February 2022. (Photo: Rogan Ward)

Days into the start of the academic year, classes were disrupted at several higher education institutions across South Africa when protests broke out over registration difficulties, financial exclusions and vaccine mandates.

Students, disgruntled by the non-commitment of the institution to ensure all students were registered by the time classes rolled around on 14 February, headed to the campus on the morning of Wednesday, 16 February to protest against academic and financial exclusion linked to student registration difficulties and outstanding fee debt.

Online and face-to-face classes were disrupted when students barricaded campus entrances and interfered with some online and on-campus lectures. The UCT shuttle service was suspended owing to the unrest. The shutdown came as UCT was still processing hundreds of student registrations.

As of 16 February, 512 student registrations were still being processed, UCT vice-chancellor Mamokgethi Phakeng said in a statement.

“Of these, 122 were new submissions, so delayed registration cases still outstanding amounted to 441. Many of these outstanding registrations will be complete by the end of today,” said Phakeng.

On 17 February, UCT administrators condemned the disruption of the academic programme and called on the SRC to refrain from such actions.

“UCT respects activism and the right of students and staff to be active, engaged citizens fighting for social justice issues… Disrupting the academic programme is, however, not acceptable. Interfering with another person’s right to go to class or teach is not acceptable,” said UCT spokesperson Nombuso Shabalala.

Shabalala added that this kind of action was “counterproductive” and “deeply damaging to the students who the SRC represents, compromising the return to face-to-face teaching which so many of them have rightly demanded after two very difficult years during the Covid-19 pandemic”.

While the university claimed that “in essence” the UCT executive had met all SRC demands, it announced on Thursday that it was still concluding the registration of “some 26,000 students” – a substantial increase from 24 hours earlier.

Asked by DM168 to comment on the thousands of registrations still outstanding, Shabalala was unable to provide a response at the time of writing.

“We are going to continue to institute a shutdown because, despite what UCT has been relaying to the public, our demands have not been met,” SRC acting president Siya Plaatjie told DM168 on Thursday. “We know that these demands have not been met because we still have students informing us that they aren’t registered, and are still having difficulties registering because of fee blocks.”

In response to student demands, UCT’s Chair of Council has agreed to call a special meeting with the SRC on 21 February, when a proposal to reconsider the fee-block policy will be tabled.

At Nelson Mandela University, the first day of classes was disrupted on 14 February, when students protested over difficulties with registration. GroundUp reported that entrances to the Gqeberha campus were blocked, while the George campus was also disrupted over registration woes.

The university issued a statement on 15 February saying it had held a series of “positive engagements” with student representatives at its campuses.

Classes were brought to an abrupt halt on 14 February, the first day of the academic year at the University of KwaZulu-Natal (UKZN), when university management suspended the academic programme in the wake of violent protests by student leaders at some of its campuses.

Normah Zondo, UKZN’s corporate relations executive director, said in a statement the decision was taken after “incidents of violence and intimidation” were reported.

“It has been reported that some student leaders have been intimidating members of staff by entering buildings and demanding that activities be halted. There have also been blockages to some entrances to prevent staff from accessing campus,” said Zondo.

“The health and safety of our employees and all students is our priority. Considering the threat that seems to be imminent, university management felt it is prudent to suspend lectures for the rest of this week. This means that the university shuttle service will also be suspended,” she said.

Zondo added that management would engage with the SRC to discuss a memorandum presented on 14 February, in an effort to respond to students’ concerns and “ensure a conducive learning environment on our campuses”.

However, it appeared that these engagements were still continuing on 17 February, after disruption flared up at UKZN’s Howard College campus following an incident on 16 February when a group of individuals demanded entry to the campus.

Zondo said that on the morning of 16 February “a group of individuals gathered outside Howard College and demanded entry to campus. However, when requested to produce the university access permits, these individuals could not do so. They became violent when Risk Management Services personnel tried to prevent them from unlawfully entering campus.

“Later, some individuals from the group staged a sit-in at the RMS building, demanding to be allowed into campus. They also had no university access permits, and they could not produce anything to prove that they are registered students.”

KwaZulu-Natal SAPS confirmed to DM168 that protest action took place outside Howard College on 16 February, where about 20 people were gathered.

“Police were on scene to monitor the situation. There were no injuries or damages reported,” said Lieutenant-Colonel Nqobile Gwala.

Zondo and Desai were unable to provide an update on the engagements with students at the time of writing. The university’s SRC president, Malusi Zuma, was contacted for comment numerous times but did not respond.

The Durban University of Technology (DUT) abruptly closed three of its campuses on Tuesday following violent attacks by protesters, which resulted in four faculty staff cars being set alight.

“Earlier this week, four cars were set alight on the Steve Biko campus and last week a DUT vehicle was burnt by unknown suspects. Buildings and computer equipment have been damaged, windows broken, staff have been harassed and intimidated, and, sadly, one of our security officers was violently attacked and needed medical attention,” Zuma said. DM168