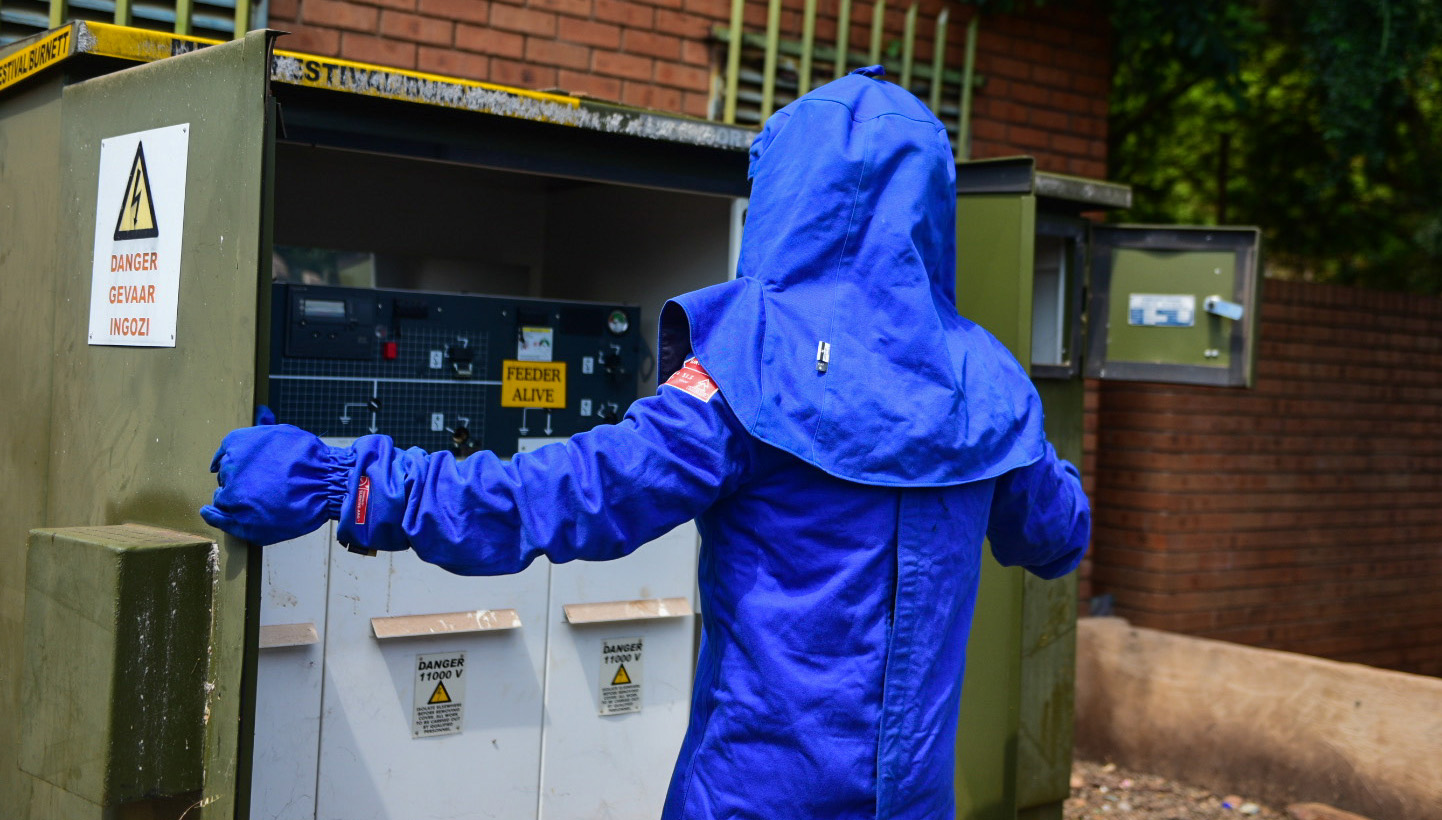 An electricity worker in electrical PPE ready after he cut off the electricity to the PRASA building. City of Tshwane mayor Randall Williams oversees water and electricity workers cutting off services to the Prasa Headoffice building in Hatfield. The City is embarking on an aggressive revenue collection campaign by disconnecting services to defaulting customers. According to a tweet by the mayor Prasa owes them R28 million. Photo: Alet Pretorius

The City’s DA leadership has lauded the move as defaulters scramble to pay up, while state organs cry foul over disruption to services.

In an unprecedented move by the City of Tshwane, the City’s debt recovery officials descended on private and government buildings to cut off services to indebted customers this week. And the cut-offs spree, codenamed #TshwaneYaTima (Tshwane switches off), seems to have paid off.

Government and private entities have since rushed to make payments after the City’s clampdown on its erring clients. Some entities have managed to pay off their debts to the City in full, while others have paid part of their debts and made arrangements to pay in full in the immediate future.

The total amount owed to the City of Tshwane is close to R17-billion, with government institutions and big businesses among those whose services were cut off. SAPS and the South African Revenue Services (SARS), who were also listed among defaulters, put the blame on their respective landlords for failing to pay the City of Tshwane.

The City of Tshwane’s vigorous action comes in the wake of an Eskom alert that the City owes over R800-million for electricity consumption.

According to acting City manager Mmaseabata Mutlaneng, the City is owed over R17-billion collectively by government departments, embassies, private businesses and ordinary households for water and electricity.

Glenwood Office Block in Faerie Glen managed to pay R4.3-million of its total debt of R8-million while the Sinoville Centre paid R300,000 of its R16-million debt to avoid being cut off. The University of Pretoria has forked out R34-million, though it is still protesting the City’s bill as being incorrect. K Carrim Commercial Property is indebted to the City on two accounts, which amount to R793,081,25 and R544,570,570 respectively and are as yet unpaid.

The five-star Sheraton Hotel has also had its services terminated but has since been reconnected after the hotel took the City of Tshwane to the high court on Wednesday in an attempt to force it to reverse its action. But the court ruled in the City’s favour. “We are in the process of clinching a settlement with them (Sheraton Hotel) as they have already started paying their debt,” said City of Tshwane spokesperson Lindela Mashigo. The hotel is indebted to the City to the tune of R23-million.

Among the government buildings disconnected from the grid in Tshwane is the SAPS headquarters Wachthuis. The owners of the building, Mendo Properties, have since paid the R5.1-million owed to the City. The State Theatre, whose artistic director Aubrey Sekhabi had initially grumbled over the R2.1-million imposed upon it by the City, has also settled its bill.

Another government entity that has made amends with the City of Tshwane is the Gautrain, which had earlier in the week threatened a court interdict to force the City to restore water and electricity to its Hatfield train station. Gautrain management had insisted that it uses prepaid meters at Hatfield station and therefore does not owe the City a cent. The station had resorted to using generators since services were cut earlier this week. However, Gautrain has since paid R16-million of its R28-million debt. Electricity and water supplies have now been reconnected to the Hatfield train station.

Police spokesperson Athelanda Mathe says SAPS doesn’t owe the City anything, rather it was the responsibility of the landlord.

The building that houses SARS has also had its services cut off by the City of Tshwane. At the moment the building remains disconnected but generators are being used to serve taxpayers. SARS spokesperson Anton Fisher has released a statement wherein he indicated that it is not SARS per se that owes the City of Tshwane. He said it is the owner of the building that houses SARS which is indebted to the City. Like SAPS, SARS is a mere tenant at its headquarters and pays its dues to the owner of the building via the Department of Public Works and Infrastructure.

Meanwhile, mayoral spokesperson Sipho Stuurman has announced that the City no longer depends on estimates to bill its clients but actually sends meter readers to all premises of its account holders to obtain the correct and actual amount of water and electricity that has been consumed by its clients.

“We have the right as the municipality to cut off services to indebted customers. We issue a 14-day notice of disconnection before actually cutting off services. This is in terms of the Municipal Systems Act and our credit control policy. We are not out to punish our clients. We know that some businesses are going through difficult financial times but clients must approach the municipality in order to make payment arrangements to avoid a situation wherein we have to cut off services to their buildings,” said Stuurman.

Reacting to criticism that the service cut-offs in Tshwane are a “political grand-standing” exercise by the DA, which is at the helm of Tshwane, Gauteng DA leader and Shadow MEC for Roads and Transport Fred Nel said power cut-offs to large institutions whose accounts have been outstanding is one of the actions taken by the municipality to remedy its dire financial position.

“If large institutions like government and private businesses do not pay their dues then ordinary households must carry the burden for them and that would be unfair. We as the DA support the City’s action to recoup what is rightfully owed to it. There is no political grandstanding or malignant motives in that regard by the DA,” he said. DM