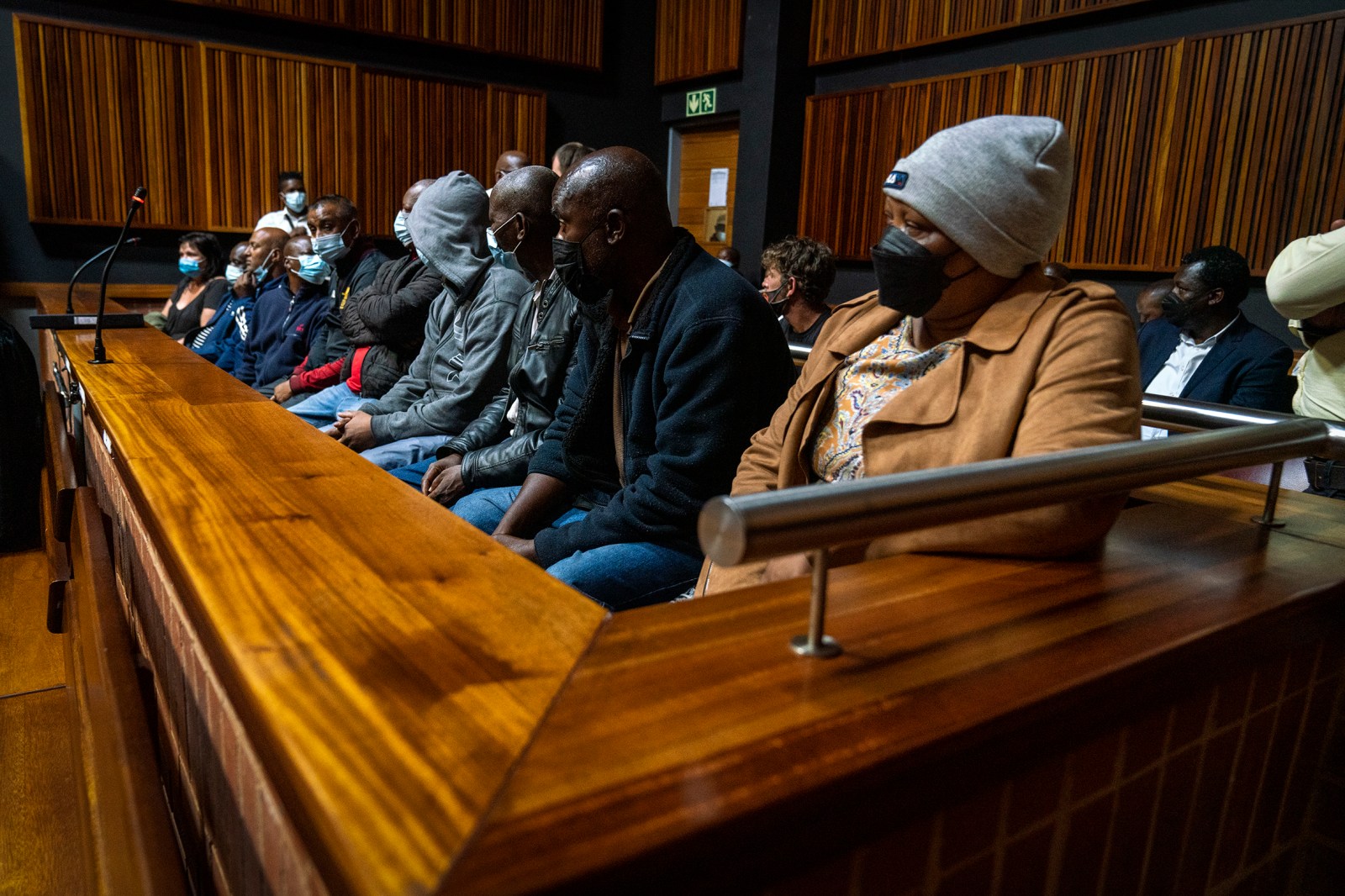 Stephinah Mahlangu (right) and her fellow accused in the dock at the Specialised Commercial Crimes Court sitting in the Palm Ridge Magistrate's Court on 8 February 2022. (Photo: Shiraaz Mohamed)

Of the 15 people arrested for corruption involving the acquisition of personal protective equipment in the South African Police Service, three were granted bail by the Palm Ridge Magistrates’ Court on Tuesday.

The 15 accused, arrested in connection with corruption at the South African Police Service (SAPS) around the acquisition of personal protective equipment (PPE) worth about R1.9-million, appeared at the Palm Ridge Magistrates’ Court on Tuesday.

The National Prosecuting Authority (NPA) said a task team appointed by National Commissioner General Khehla Sitole and the NPA’s Investigating Directorate in Gauteng and Limpopo arrested the suspects between 5am and 8am on Monday.

They are charged with fraud, theft, corruption and forgery. The NPA said the charge of forgery stems from a scheme intended to unlawfully benefit a third-party supplier of latex gloves for the police in April 2020.

“The arrests flow from a wide-ranging investigation into procurement and supply chain management at SAPS. The investigation has uncovered the award of numerous contracts for the benefit of third-party front companies, which in turn facilitate kickbacks to senior SAPS officials.

“This is the sixth case by the ID tackling the scourge of corruption in the police. More arrests emanating from police corruption can be expected,” the Independent Police Investigative Directorate’s Sindisiwe Seboka said.

All 15 accused – four women and 11 men – appeared in court on Tuesday.

On the forgery count, the state alleges that “on or about 21 April 2020 at or near Pretoria in the Regional Division of Gauteng, accused 1, 2 and Siyanqoba, did unlawfully, falsely and with the intent to defraud and to the prejudice of the SAPS or/National Treasury and/or the public forge a document which purported to be a B-BBEE certificate which purported to have been issued by the EmpowerLogic”.

On count 2, the state alleges that “accused 1, 2 and 14 did unlawfully, falsely, and with the intent to defraud and to the prejudice of the SAPS and/or the public utter an instrument in writing, to wit: a document which purported to be a B-BBEE certificate which purported to have been issued by EmpowerLogic”.

On count 3, the accused are charged with fraud in that “accused 1, 2 and 14 and accused 15 acting in concert with each other and Jane Mthembu did unlawfully, falsely, and with the intent to defraud National Treasury and/or the south African police and/or the public in that; Siyanqoba one of the companies at the centre of the crimes, was registered as a supplier of personal protective equipment (PPE) in the central supplier database (CSD) and/or; Siyanqoba was eligible to be invited to supply latex gloves to the SAPS in terms of the requirements of the law that governed procurement of PPE for the containment of the spread of Covid-19”.

This case is just one of many involving the brazen looting of funds meant for the provision of PPE for the police. (La Vie en Rose: A single Mpumalanga company robbed SAPS…).

The state did not oppose bail for Salamina Khoza, Isaac Majaji Ngobeni and Stephinah Mogotle Mahlangu as they met all the requirements for bail. They were not flight risks, had no previous convictions and no pending cases.

However, the state said fixing the amount of bail to the amounts deposed to by applicants 2 and 14 in their affidavits would not be in the interest of justice. The two applicants had asked the court to set their bail at R500.

Applicant 15 had asked the court to fix her bail at R5,000, which the state said was reasonable despite the applicant having told the court she earned about R43,000 after deductions as a SAPS brigadier.

In justifying R5,000 bail for accused 15, the prosecution said the applicant was still a member of the SAPS and was unlikely to forfeit the R5,000 and choose to be a fugitive from the law. The prosecution said if she forfeited her bail money and fled, she stood to lose.

Judge Phillip Venter noted that the second applicant said she can afford R2,000 bail, but questioned how she would manage because she claimed she survived solely on her pension.

The state had asked the court to set bail for the second applicant at R20,000 because she was – on paper – the sole director of companies that received payments in excess of R2-million from the SAPS. She asked the court to fix her bail at R2,000.

“The only inference that the court can draw is that the second applicant was not totally honest,” Judge Venter said, adding that he saw no reason for varying bail amounts for the three applicants and granted each of them R5,000 bail.

The matter will resume on Wednesday when the rest of the accused are expected to apply for bail. DM