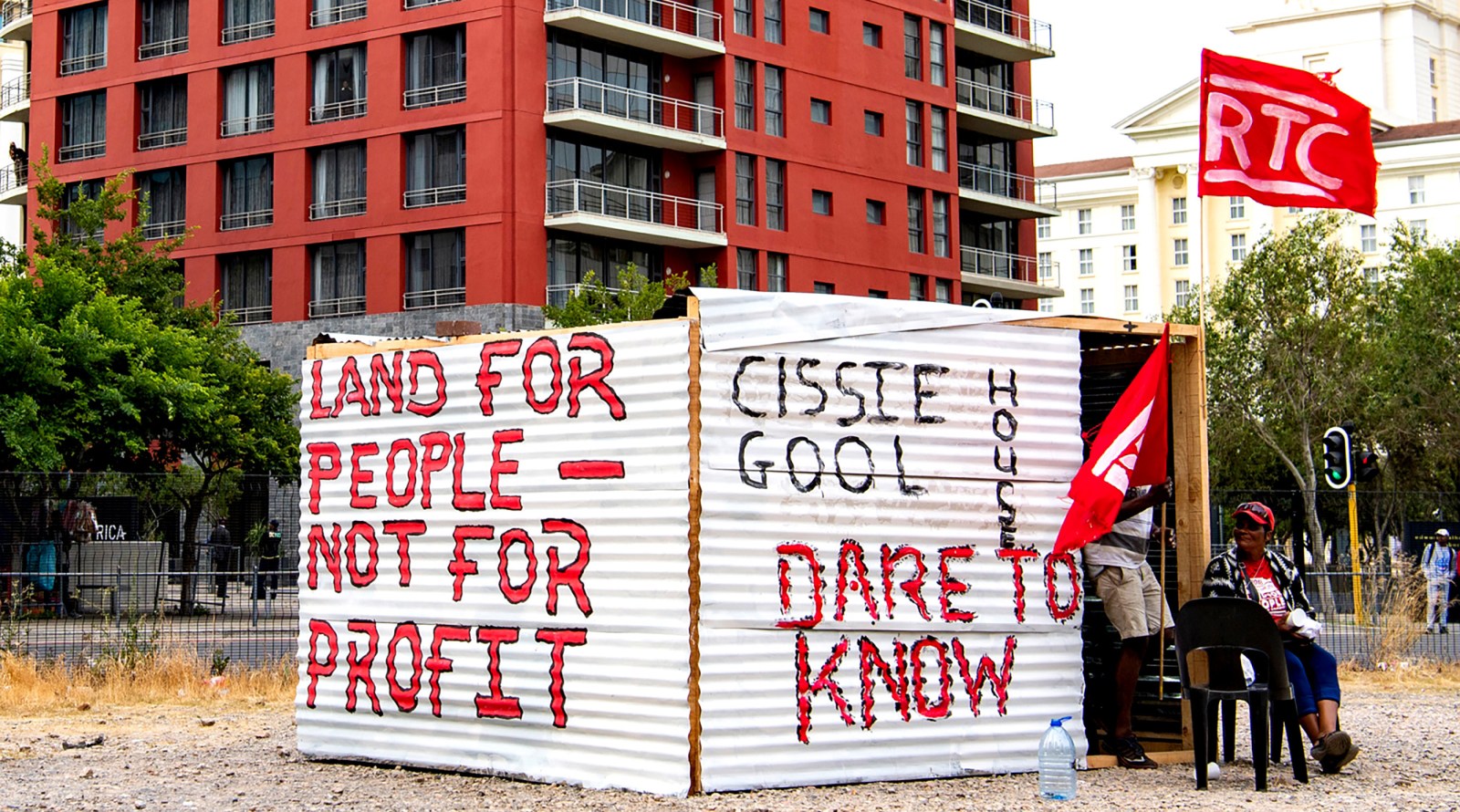 These shacks were erected on the Cape Town Foreshore by social housing and advocacy groups on 4 December 2018. (Photo: Gallo Images / Netwerk24 / Jaco Marais)

The protracted and often messy political disputes over inner-city land could be a thing of the past as the City of Cape Town plans to release public land in well-located areas for housing.

City of Cape Town councillor Malusi Booi said the city plans to dispose of well-located land for housing within the next year. This is the latest turn in an often messy battle for people to live in well-located areas of the city. One of the first sites the City will dispose of in 2022 is the Fruit and Veg site.

Booi, the mayoral committee member for human settlements, made the announcement on Monday at the site, which is one of 10 initially earmarked for affordable and social housing in the city.

However, Booi has no date for when construction will start at the site, or when people can move into a potential 150 affordable housing opportunities at the site.

Booi told the media and City officials that the site is near Parliament and within walking distance of the city’s public transport interchange. Social housing would be on a building’s third and fourth floors, which would have views of the harbour.

“It doesn’t get better,” said the councillor, adding that people such as teachers and police officials would be able to live in the development.

The release of the land dates back to 2017 when the then mayor Patricia de Lille and the then mayoral committee member for transport and urban development Brett Herron wanted to release several tracts of land in the inner city for affordable housing.

In 2018, after De Lille and Herron’s nasty and public split from the DA and their City roles, the land releases came to a halt. In 2019, the Pickwick transitional facility, on Pickwick Road, Salt River, was officially used as a transitional facility for people living in the nearby Pine Road informal settlement.

“We will be disposing of all the land parcels in this year,” said Booi during Monday’s briefing.

The announcement came a few days after the launch of the first units that have been occupied in the provincial government’s landmark social housing project, Conradie Park, in Pinelands, about 11km from Cape Town’s Civic Centre.

Asked by Daily Maverick what took so long to kick-start the process of releasing land, Booi attributed this to internal processes, such as planning approvals and heritage issues.

“Housing is a complex issue because everyone wants to be closer to where they work,” said Booi. “It’s such a difficult one, but we are doing our level best.”

The political fights over affordable housing in Cape Town

During the Tafelberg court case, lawyers for the City confirmed that since the dawn of democracy in South Africa, no affordable or social housing had been built in the inner city.

Booi said at the briefing this was one of the issues the City had been attacked for – “unfairly. But some would say [what has been] fair, depending where you’re coming from, has been this issue of inner-city development and addressing the issue of spatial planning.”

Affordable or social housing in the Cape Town CBD has caused public spats between the City’s political leadership of the DA and the Good party, led by De Lille.

After his resignation from the DA, Herron said one of his reasons for leaving was that a cabal of white DA councillors had prevented him from moving forward with plans for affordable and social housing in the CBD. De Lille and Herron went on to form Good, running on a ticket of Cape Town needing apartheid spatial planning transformation.

“People like Brett [Herron] delayed a lot of things. Upon taking my position I did my level best to expedite the issues,” said Booi.

In response to the news, Herron released a statement saying his party “commends the DA-led City of Cape Town for having the courage to reactivate important inner-city housing projects it cancelled for political reasons after the resignation of former mayor Patricia de Lille”.

Explaining the process for the vacant land, Herron said calls for proposals were issued for five sites and “private sector developers responded with a number of exciting bids… that’s when the project became a political football. De Lille and my best efforts to implement it were resisted by conservatives in the caucus. It was a major factor in our decision to give up our positions and leave the party.

“The fact that it has taken the city nearly five years to come round to the idea is far from ideal, in the context of the massive housing backlog and the jobs haemorrhaged in the construction sector.”

So, despite the politicking and delays, how can the public trust that this plan will work?

Booi told Daily Maverick that once internal processes are completed, “I hope we will respond much quicker, so the development goes much faster… seeing is believing, you are here on-site.”

He said the City was already handing over land.

“We have tweaked some of the issues that were delayed, but we will be calling you on some of the sites when we are disposing of them.” DM