‘A spit in the face’: Protesters decry West Coast s... 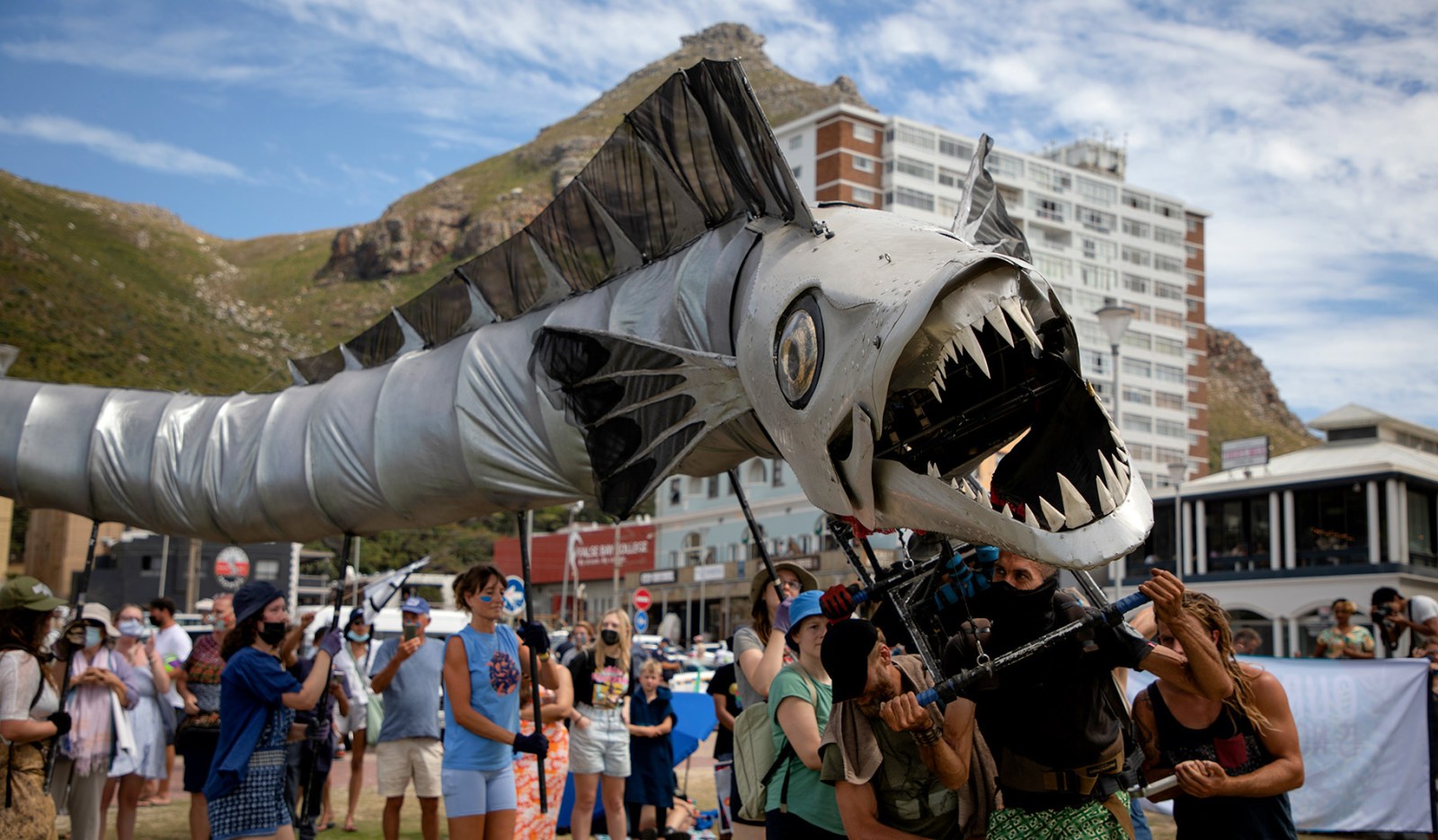 A giant puppet of a snoek is displayed as people protest on 6 February 2022 in Cape Town against the seismic survey off the West Coast. (Photo: Gallo Images / Daily Maverick / Victoria O’Regan)

A coalition of organisations and civilians gathered at the weekend to oppose the ongoing seismic survey off the West Coast. The protest comes ahead of a court case to urgently interdict the survey programme, which will be heard on Monday.

Protesters and civic and climate organisations gathered at Muizenberg Beach in Cape Town on Sunday to call for an end to the seismic survey programme currently under way off the West Coast.

Several speakers addressed the crowd of about 100 people as to why the surveying by Australian geoscience company Searcher Geodata should come to an end.

Pedro Garcia, the chairperson of the South African United Fishing Front (SAUFF), told Daily Maverick it was important that the crowd heard how the surveying is affecting fishing communities.

“Our communities are on the brink. Any further risk which may compromise our livelihoods even further will be the tipping point; there’s no doubt about that. Most fishing communities… were the original custodians of the resources… so much of their local and indigenous knowledge is being ignored when it comes to decision-making,” Garcia said.

He said fishing communities had been marginalised and abused over the years. He told the audience to imagine a full fishing basket and how that had diminished over the years from the colonial era to the apartheid era when fish were given to the privileged, and from government regulations limiting species catch, and then the impact of the Covid-19 pandemic. He said the climate crisis had also affected them as some fish species had migrated because of warmer ocean temperatures.

Garcia said the pace at which the company and associated entities moved through the community when conducting consultations was so fast and at such short notice that it was meaningless.

“With the seismic surveying taking place right now, our biggest concern is that the risk is unknown. Anything that further compromises the fishing basket of our fishers is going to have devastating consequences,” he said.

Two large metal and cloth puppets – one of a snoek and one of a whale – were paraded through the crowd, to the beat of drums. Extinction Rebellion Ocean Rebels were also present; dressed in blue the group of five, connected with industrial rope, performed for onlookers.

Priyanka Naidoo, a candidate attorney at the Legal Resources Centre which is representing the small-scale fishers, told Daily Maverick that Searcher Geodata had not complied with the National Environmental Management Act as far as consultation with the small-scale fishing communities was concerned.

“I would even say that I don’t think anyone has been consulted. Consultation must be meaningful. There is no way you can give a community a 600-page document in a language that no one speaks and call that consultation. That’s a farce.

“To this day, no one from Searcher or Pasa [Petroleum Agency of South Africa] has come out to these communities to hear what they have to say about it.”

Protesters carried placards that read, among others, “Our oceans are not for sale”, “Pick on someone your own ‘seis’ ”, and “Fossil fuels are cooking the planet”. One protester carried a picture of Environment Minister Gwede Mantashe, labelling him a “climate criminal”.

Gabriel Klaasen, a youth coordinator at the African Climate Alliance and communications officer at Project 90 by 2030, told the protesters he was there to call for an end to seismic surveying and blasting around the world.

“For too long have governments and big fossil fuel communities stood on the necks of South Africans wanting a future that is sustainable for all. But today we say: enough.

Protester Sibusiso Mazomba (20) told Daily Maverick: “We are so disheartened that after the interdict against Shell was won another seismic surveying programme was introduced. So now it’s battle after battle. We have to keep going, we have no choice; this is our future we are fighting for, our oceans, the future of our people, the livelihoods of people even.”

Simon Sizwe Mayson, an Extinction Rebellion supporter, told Daily Maverick he was attending the protest to highlight the need for a blanket ruling to outlaw seismic surveying cases.

“I’m feeling very angry that this has happened. Although there are legal processes, they can be twisted. The people that live on the West Coast and use the sea as a form of livelihood don’t actually know that the surveying programme exists or can stop it from happening. At the same time, I’m inspired that these diverse organisations can come together, working in unison [to end seismic surveying],”  Mayson said.

The importance of saving the oceans and the direct impact they have on people’s livelihoods, alongside the social justice aspect of climate change were some of the reasons why Azola Zulu (29) attended the protest.

“It’s really a spit in the face,” Zulu said about the Wild Coast seismic survey. “Protests play a big role because communities are not really engaged, or not in an effective manner.”

The urgent interdict against the seismic surveying will be heard in the Cape Town High Court today (Monday). DM/OBP