‘It’s the qualities that made Neil so special that...

Time to focus on the future: ‘It’s the qualities that made Neil so special that are needed now’ 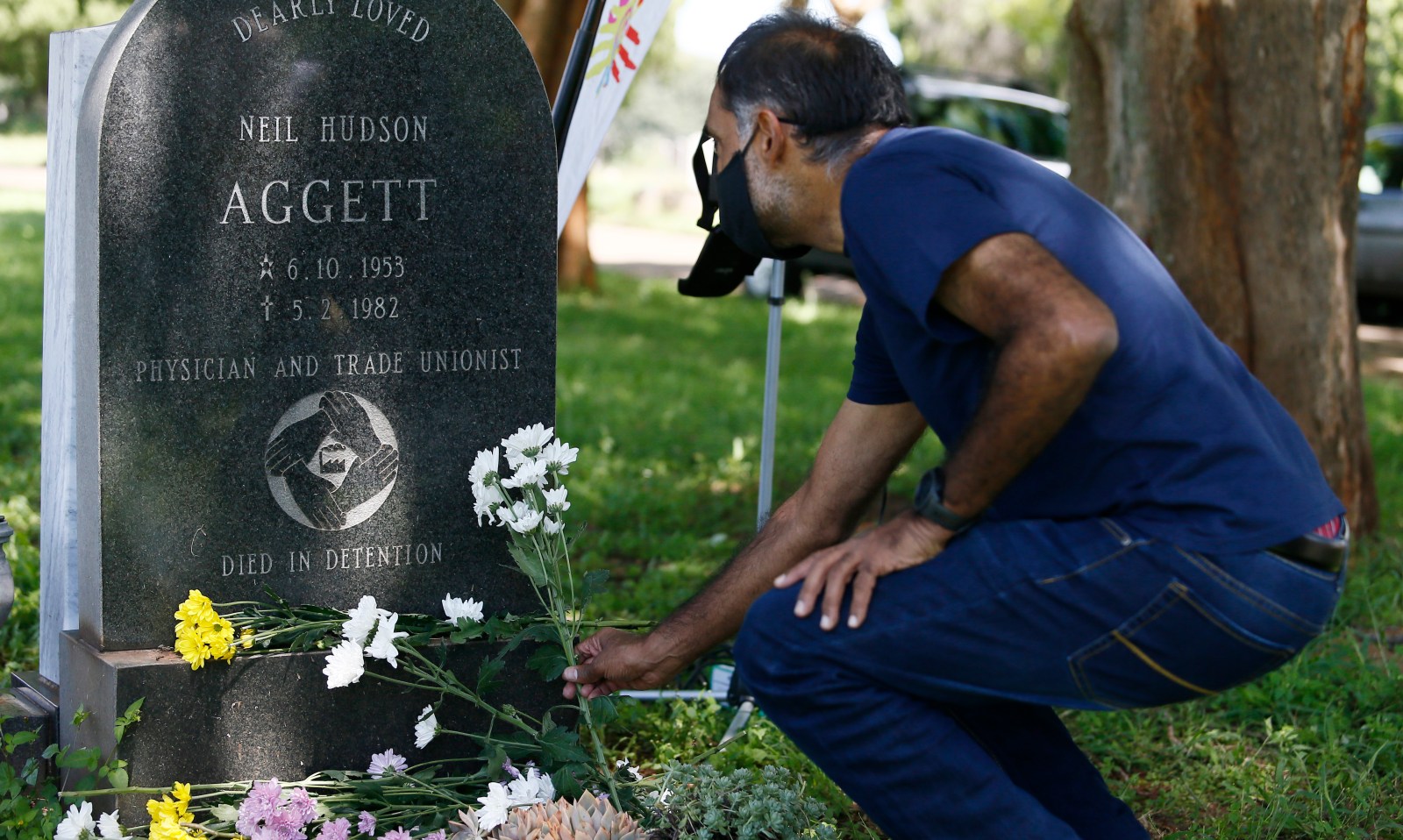 Activists, family and friends laying wreaths at the commemoration to mark 40 years since the death of trade unionist and anti-apartheid activist Dr Neil Aggett at Westpark Cemetery on 6 February 2022 in Johannesburg. (Photo: Felix Dlangamandla/Daily Maverick)

At 40 years after Neil Aggett’s death, it’s time to call it a day on public memorials in his name and to focus on the fight that rages still. A constant backward gaze has become a block and a distraction for a country that needs to answer the question of, “where are we going as a country in trouble?” said Liz Floyd. She was giving the main speech at a flower-laying ceremony organised by the Kathrada Foundation on Sunday, remembering anti-apartheid activist, unionist and medical doctor Neil Aggett.

Aggett was found hanging from the bars in his jail cell in Johannesburg’s John Vorster Square Police Station 40 years ago this weekend, on 5 February 1982. While the apartheid state called his death a suicide, his friends, family and human rights activists have never strayed from their belief that he was tortured and killed by the state’s Security Branch policemen.

The case of Aggett’s death in detention is one of around 300 put forward by the Truth and Reconciliation Commission in 2003 for further investigation and possible prosecution by the National Prosecuting Authority (NPA). However, only a handful of these cases, including Aggett’s, have advanced to become reopened inquests, despite human rights organisations’ pressure to compel the NPA to get its house in order; to rise above political interference; and to get on with the job two decades later.

The reopened inquest into Aggett’s death began in 2019 and concluded last year. A court ruling is expected in the early part of this year.

Floyd was Aggett’s partner at the time, also a medical doctor and fellow activist. She was in detention at the same time as Aggett and could not attend his funeral. But thousands did attend, making long, difficult journeys from across the country to pay their respects.

Floyd outlined that at the time Aggett was detained he was working to bolster workers’ rights and to ensure a new dawn of African-led unions. He died after 70 days in detention.

She also paid tribute to George Bizos, Max Coleman and Frank Dutton, who were instrumental in fighting for justice for Aggett and other detainees and the disappeared.

Floyd admitted at this 40-year commemoration of Aggett’s death that at the beginning stages of the groundwork for reopening the inquest she didn’t fully support the process.

“I didn’t welcome the reopening of the inquest because I didn’t expect them to dig out any more information. For me it was something that happened 40 years ago — we didn’t need to go back there.

“But the reopening of the inquest has been about revisiting issues, reflecting, resetting and getting a new perspective. It has been helpful,” Floyd said, after laying succulents from her garden at his grave.

She said the inquest has also reunited many activists who came of age in the 1970s.

“Not one of us sees ourselves as victims. We were fighting. And we continue to fight. And by the way, we won. But we are now in the thick of things, trying to undo some of the deterioration and the dismantling of our progress, progressive movements and organisations.”

Speaking to Maverick Citizen afterwards, she cautioned that commemoration of the fallen can detract from the work that now has to be done for South Africa to live up to the ideals of a better life for all that activists, including Aggett, died fighting for.

More perspective from the doctor who committed to serving in the public health sector until her retirement a few years ago, is that it’s now up to the next generation to build a country that serves and uplifts many more of its people — and does not enrich and give advantage to political elites and their family and friends.

“The ANC has a bad habit of looking backwards to Struggle heroes and not being clear enough about the way to move forward.

“I don’t think we need another memorial after 40 years — it’s enough, we can’t keep looking backwards. It will take a younger generation to forge a way forward. But the question is how the younger generation has actually been brought up and trained to take on these bigger roles,” Floyd said.

Aggett’s friend Gavin Andersson also stressed this point when he spoke at the memorial of “one of the shining ones”. He said: “We were going to change the country… now I realise how partial success was, how we didn’t achieve a quarter of what we had hoped.”

He called Aggett the exemplar of the qualities needed to continue a fight for true liberation.

“In this time we find ourselves it’s the qualities that made Neil so special that are needed right now. He was very humble, very considered, deeply compassionate. He listened, full of respect, trying to understand. He was at his happiest working and organising with others,” he said.

Aggett’s sister, Jill Burger, sent a message from the UK. She said it was difficult to try to imagine her little brother, who was just 28 when he died, as a 68-year-old man. But she said she wanted to believe that had he lived, Aggett would have continued to serve and would have been an activist doctor fighting for Covid-19 vaccines for the weakest and most vulnerable in society.

Burger’s message went on: “His death was not only a terrible loss to his family, friends and colleagues, but also to the country. He had so much to give in terms of his medical knowledge and his deep compassion.

“But I don’t want you to feel that this is a sad occasion, but rather a moment of celebration; that once, more than 40 years ago, there was a man filled with such deep conviction to end the suffering of the apartheid system that he was prepared to die for his ideals.

“Perhaps in remembering Neil, we can live our lives with some of that courage and challenge the greed, hypocrisy, and careless cruelty we come across.” DM