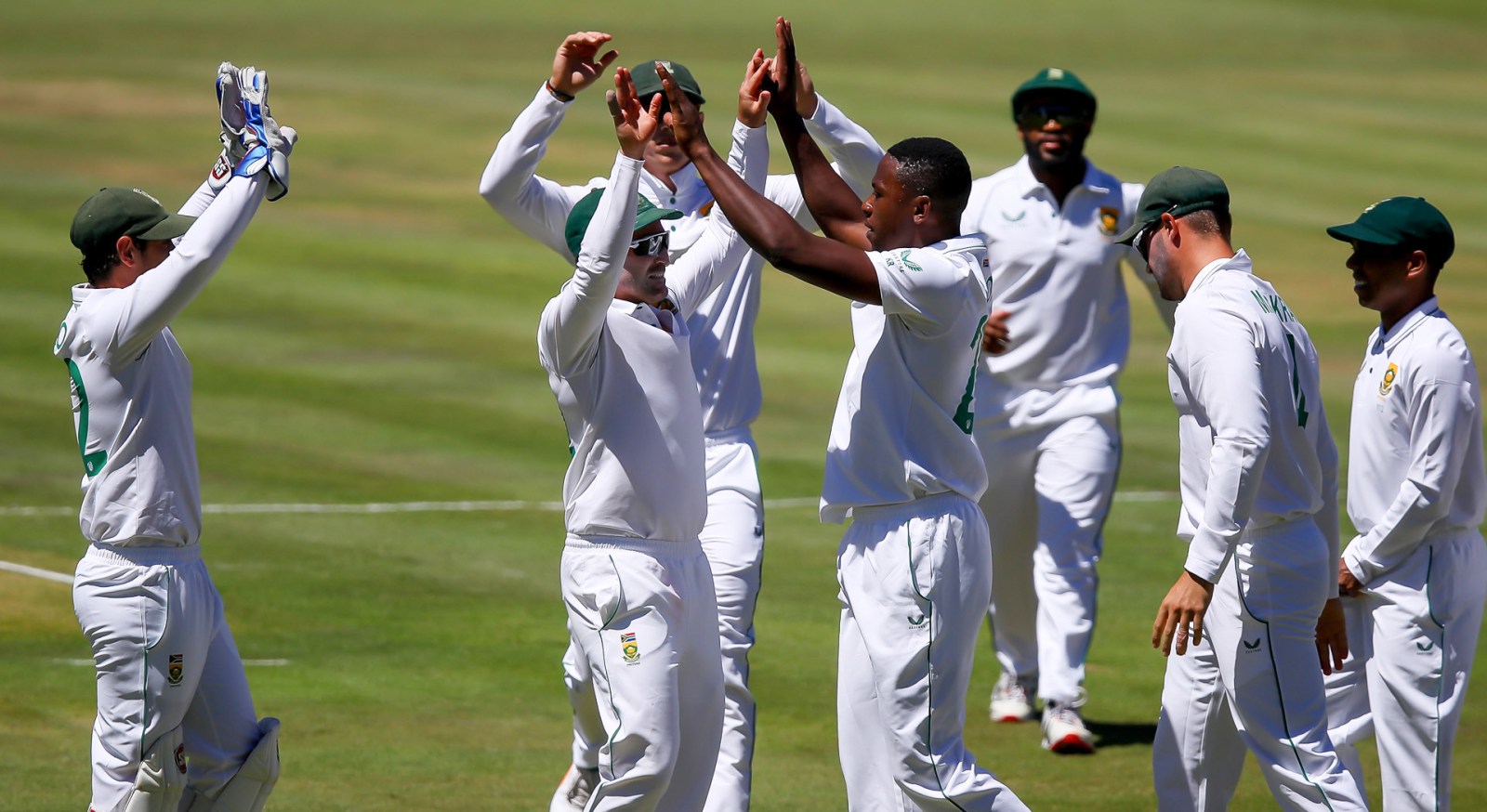 Dean Elgar (left) and Kagiso Rabada (right) celebrate after taking the wicket of KL Rahul during the first Test against India at SuperSport Park in Centurion on 28 December 2021. (Photo: Gordon Arons/Gallo Images)

South Africa will face New Zealand in two Tests in Christchurch, starting on 17 February. But cricket won’t be the only thing on their minds.

The Proteas arrived in the Land of the Long White Cloud under a dark cloud on Friday as coach Mark Boucher is due to defend himself against charges of “gross misconduct” brought by his employers at Cricket South Africa.

It is a distraction for the coach and the team and a situation that has dominated discourse at a time when their superb displays on the field should be in the spotlight.

The Proteas face New Zealand, the inaugural World Test Championship winners, in two Tests at the Hagley Oval in Christchurch later this month, buoyed by a recent 2-1 home series win over India.

But the actual playing of cricket is overshadowed by CSA’s ham-fisted handling of a situation they have failed to control. By publicly announcing the charges against Boucher on the eve of the second one-day international (ODI) between South Africa and India last month, CSA managed to completely undermine the efforts of the players.

It was a staggeringly tone-deaf decision by the so-called custodians of the game. The impression was that the timing was designed to create maximum embarrassment and pressure on Boucher, but the reality was that it insulted the players and their efforts. The Proteas won the series 3-0, but the “Boucher situation” was the main storyline.

The coach will have to answer claims of racism, stemming from a team song using racist language in the 1990s when he was a young player.

Boucher also has to defend himself against claims that he undermined former assistant coach Enoch Nkwe. The charge sheet infers that Boucher’s apparent disrespect for Nkwe stems from racism. These are going to be difficult charges to prove.

The hearing has been set for May, meaning there are three more months at least of this saga overlapping with the Proteas’ clashes against New Zealand, and Bangladesh after that.

Following that, the Proteas have away-Test series against India and England, for which Boucher and the team can’t plan because of the uncertainty about his future.

From a high-performance perspective, the team is being severely undermined. And as ever, it’s the players who have to bear the brunt of boardroom power struggles.

Some players might be called on to testify in the hearing, depending on the evidence presented and the cross-examination required. Test skipper Dean Elgar and ODI captain Temba Bavuma held a meeting with representative body the South African Cricketers’ Association (Saca) in late January to gain clarity on their rights and responsibilities if called. Which only serves to underline how farcical the situation has become from a playing perspective. Instead of solely focusing on New Zealand, the athletes have to consider the possibility of being called as witnesses in their coach’s “trial”.

“I think it [Boucher’s case] takes away from the group everything that we’ve achieved. And for me that’s bullshit,” a bristling Elgar said this week.

“But as a players’ group we’ve achieved so much and that gets squashed by negativity in the media – it sells headlines. This process has been up in the air for quite some time.

Saca CEO Andrew Breetzke confirmed that the organisation would support players if they were called to the hearing. “Our mandate is to protect the players,” he said.

“It is every player’s decision [to testify or not], and we will back them either way. A player must follow his conscience.”

Ever the fighter, Elgar said the team would use the situation to galvanise them and drive them to beat New Zealand on their own patch.

“We’ve had these experiences that we’ve had to deal with as a players’ group. If anything, it’s really helped us,” he said.

“We’ve moved forward in a good way. We’ve realised that cricket comes first for us. Irrespective of what our coach is going through, we’re still supporting him through this process. We know how much value he adds to our system and to our group.

“But we’ve had these tough times before, and I’d like to think it’s just another hurdle in our path that we’re going to have to get over. We’ve gotten over them pretty well as a players’ group. We realise cricket remains cricket, and that’s our priority.

“We need to stick together, which we’ve done in the past, and let this follow its course. But we know we’re here to play cricket. We’re here to win matches and series.”

As if the Boucher situation wasn’t enough of a distraction, the Proteas also travelled to New Zealand without star No 3 batter Keegan Petersen. The compact right-hander returned a positive Covid-19 test on the eve of departure and was ruled out of the tour. Zubayr Hamza was called up as a late replacement.

Petersen was the star of the India series, top-scoring with 276 runs at an average of 46 with three half-centuries. Finally, the Proteas appeared to have nailed down the troublesome No 3 position. But those plans have been shredded and the batting order, in what is likely to be seamer-friendly conditions, will need a reshuffle.

The Proteas have never played at the Hagley Oval. The Black Caps have won seven of nine Tests played there.

Sarel Erwee, who has been with the team throughout the India series and the West Indies tour before that, is the frontrunner to replace Petersen. Ryan Rickelton, who has an average of more than 72 in first-class cricket this summer, could also fill in. Rickelton has scored three centuries in his past five innings but he was not name-checked by Elgar.

“It’s unfortunate that KP is going to miss out on this trip. I would love to have seen him build on what he started in the India series,” Elgar said.

“Sarel Erwee has been the back-up for quite some time. He has had a few series where he has been carrying drinks and has been brilliant for us off the field. I’d like to think he is the one guy that comes in.

“In saying that, Zubayr is another option for us… It’s another opportunity for someone to come in and make a play for the team and try and give the selectors a little headache. It’s pretty clear-cut that Sarel and Hamza are the two guys pushing for that No 3 spot.”

The touring party has started 10 days in an isolation and quarantine facility in Christchurch. Elgar was hopeful that, once they had all passed Covid tests after three days in quarantine, they would gradually be able to start practice in small groups. DM168