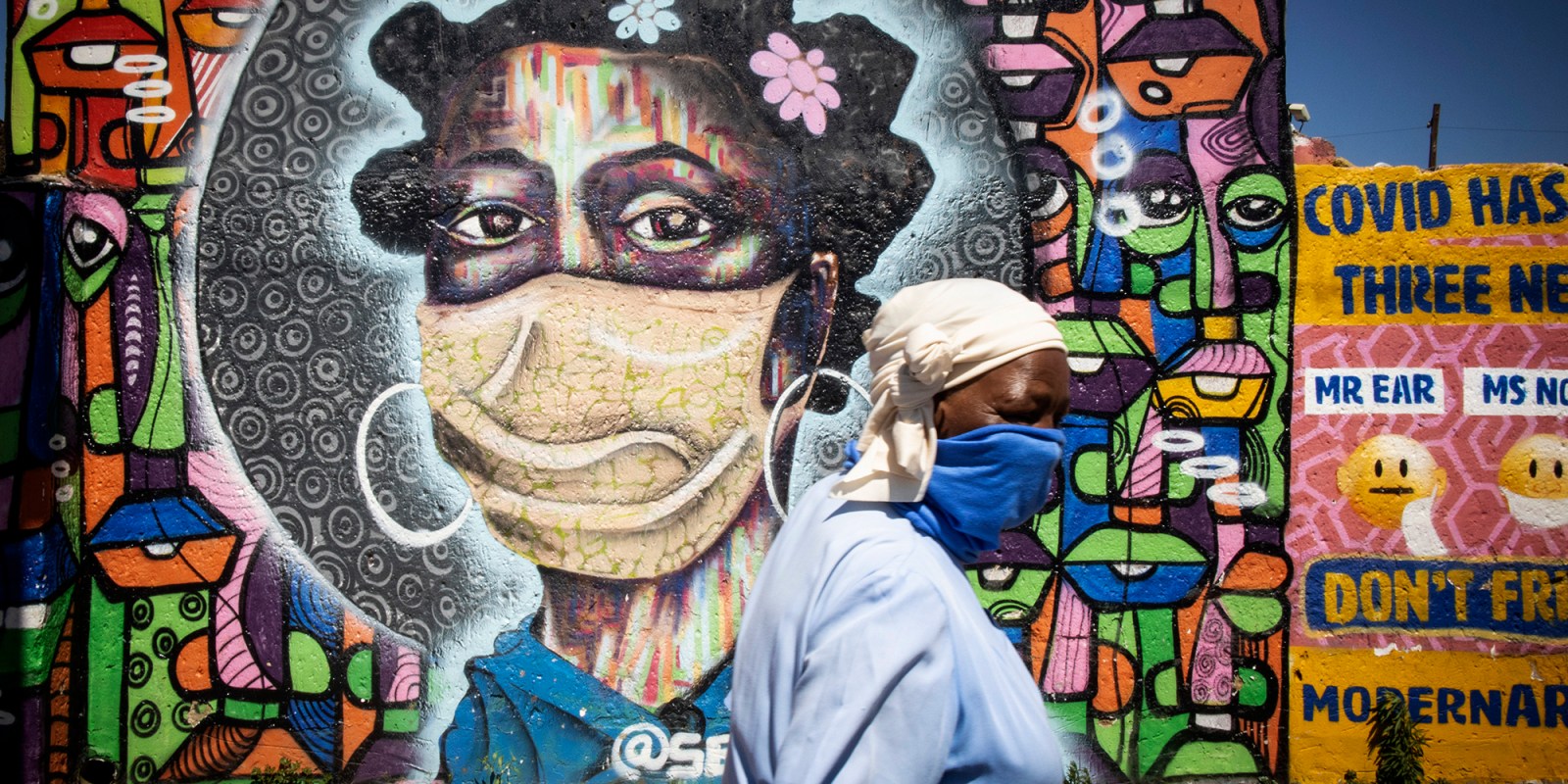 A Soweto resident passes graffiti educating locals about the dangers of the coronavirus on 30 November 2021. (Photo: EPA-EFE/Kim Ludbrook)

Covid-19 vaccinations among US children aged five to 11 have fallen to the lowest levels since the shots were first approved, a sign that parental enthusiasm for the shots may be running low even as authorities consider expanding them to even younger children.

Prime Minister Justin Trudeau downplayed the idea of deploying Canada’s military to help clear out a trucker protest that’s paralysed the capital, raising the prospect of an extended occupation of Ottawa’s downtown core.

Sweden will lift restrictions starting next week, citing a high vaccination rate and a manageable situation in its hospitals, while France’s health minister said the country is past the worst of the latest wave.

Omicron cases are spreading in China during the countdown to the Winter Olympics in Beijing, with a leading ski jumper pulling out after she tested positive. 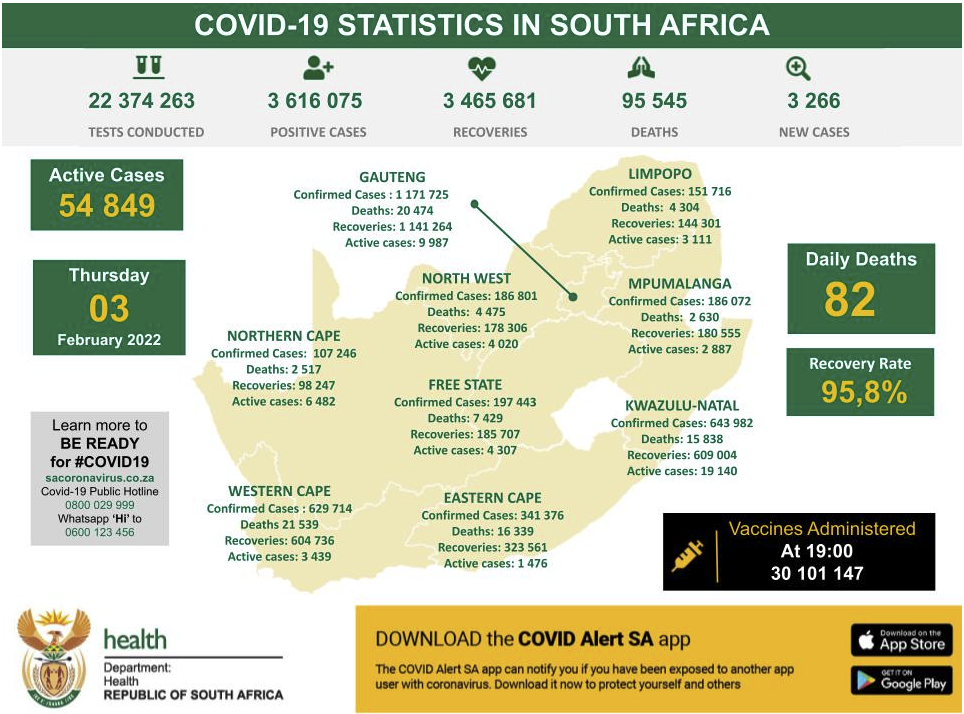 Covid-19 vaccinations among children aged 5-11 have fallen to the lowest levels since the shots were first approved, a sign that parental enthusiasm for the shots may be running low even as authorities consider expanding the shots to even younger children.

The seven-day average of first doses fell to about 37,062 on January 28, marking the slowest one-week period since the government approved the vaccines for those children on November 2, according to US Centers for Disease Control and Prevention data. Just 31% of children aged 5-11 have got a shot, compared with 75% of the total population.

Trudeau rules out army against truckers

Prime Minister Justin Trudeau downplayed the idea of deploying Canada’s military to help clear out a trucker protest that’s paralysed the capital, raising the prospect of an extended occupation of Ottawa’s downtown core.

Trudeau, speaking in a virtual news conference from isolation after contracting Covid-19, said on Thursday that the federal government would consider any request for military help from provincial or city officials – but he doesn’t see that happening in the near future.

“One has to be very, very cautious before deploying military in situations engaging Canadians,” Trudeau said. “There have been no requests, and that is not in the cards right now.”

Merck said on Thursday that it now expects lower sales for its Covid antiviral molnupiravir than it had previously projected. The company now projects $5-billion to $6-billion in sales of the drug for the year, compared with a previous estimate of $5-billion to $7-billion.

French drugmaker Valneva’s vaccine might not receive a decision from European Union regulators until after mid-April, extending the review process.

The European Medicines Agency is awaiting more data from Valneva covering the entire adult population, Marco Cavaleri, the regulator’s head of biological health threats and vaccines strategy, said at a briefing on Thursday. The pace of the review depends on when the data is available, though it’s unrealistic to expect it before Easter, he said.

Subvariant has spread across Africa

The Omicron subvariant known as BA.2 has been found across Africa, and countries should sequence more samples so the extent of its spread can be determined, the World Health Organization said.

So far, the strain has been found in Senegal in West Africa, Kenya in East Africa and Malawi, Botswana and South Africa in southern Africa, Nicksy Gumede-Moeletsi, a virologist with the WHO, said on Thursday.

The Omicron subvariant BA.2 makes up 69% of confirmed cases in Denmark and will reach 100% by mid-February, according to a study from the Danish virus watchdog SSI. BA.2 is about 30% more contagious than the original Omicron, known as BA.1, the study found.

While unvaccinated people have a bigger risk of contamination overall, those who have been vaccinated are more likely to catch the new strain than BA.1. Denmark lifted all its Covid restrictions on Tuesday despite record daily cases, as hospital admissions and the number of people with severe disease are gradually declining.

Novavax’s vaccine won clearance from UK regulators for use in people aged 18 and over for a first and second dose. The Medicines and Healthcare Products Regulatory Agency said nuvaxovid, as the protein-based shot is known, will be the fifth Covid vaccine authorised for use in Britain.

Health Secretary Sajid Javid said the next step will be for the Independent Joint Committee on Immunisation and Vaccination, the government’s advisory panel on inoculations, to consider its use as part of the country’s Covid vaccination programme.

Europe could see Covid ‘ceasefire:’ WHO

Europe is at a crossroads in the fight against the pandemic with a potential “ceasefire” in sight, according to the director for the region at the World Health Organization.

While cases and hospital admissions from the Omicron-driven wave are still rising in Europe, deaths are beginning to plateau, Hans Kluge told reporters on Thursday. As the Omicron wave recedes, Europeans will have a relatively high level of immunity derived from vaccines and from previous infections.

“This period of higher protection should be seen as a ceasefire that can bring us enduring peace,” Kluge said. He urged a “drastic” increase in vaccinations, particularly in lower- and middle-income countries.

The European Union is proposing to extend its digital Covid certificate system for a year, until the end of June 2023, as it aims to facilitate travel even as many governments are easing or eliminating pandemic-related restrictions.

“Without this extension, we risk having many divergent national systems, and all the confusion and obstacles that this would cause,” Justice Commissioner Didier Reynders said in a statement.

Africa is short at least $1.29-billion to fund the roll-out of vaccines, the World Health Organization said, citing data from 40 of the continent’s 54 countries. Only 11% of Africa’s 1.2 billion people are fully inoculated and the weekly pace of vaccination needs to rise sixfold to hit a target of getting 70% immunised by the middle of this year, the WHO said Thursday.

Germany’s vaccine commission has recommended a second messenger-RNA booster shot for the elderly and people with weakened immune systems or who work in medical and other care facilities.

Officials in Hong Kong warned the city could see exponential growth in infections as the number of untraceable cases continues to rise, potentially overwhelming the healthcare system. The financial hub reported 31 unlinked infections among 142 new cases on Thursday. Of those, 121 were local cases. Another 160 preliminary positive cases were detected.

Sweden will lift restrictions starting next week, citing a high vaccination rate and a manageable situation in its hospitals despite what it calls a massive increase in transmission. “It’s time to open up Sweden again,” Prime Minister Magdalena Andersson told reporters in Stockholm.

‘Worst is behind us,’ French minister says

“The worst is behind us,” the minister said late Wednesday on BFM TV, adding that the rate of hospitalisations is peaking.

France’s vaccine pass could be phased out before July if the current infection trends continue, he said. Some seven million people will lose their vaccine passes by February 15 if they don’t get a booster.

The Beijing Olympic committee reported the highest daily case-load for Olympic-related personnel, with a total of 55 people testing positive on February 2 at the airport and inside the closed loop that shields Olympic participants and staff from the rest of China.

World-leading female ski jumper Marita Kramer of Austria will miss the Olympics because she didn’t recover from the virus in time, Reuters reported. The games, jointly held in Beijing and the adjacent city of Zhangjiakou in Hebei province, will run from February 4 to 20. DM/MC