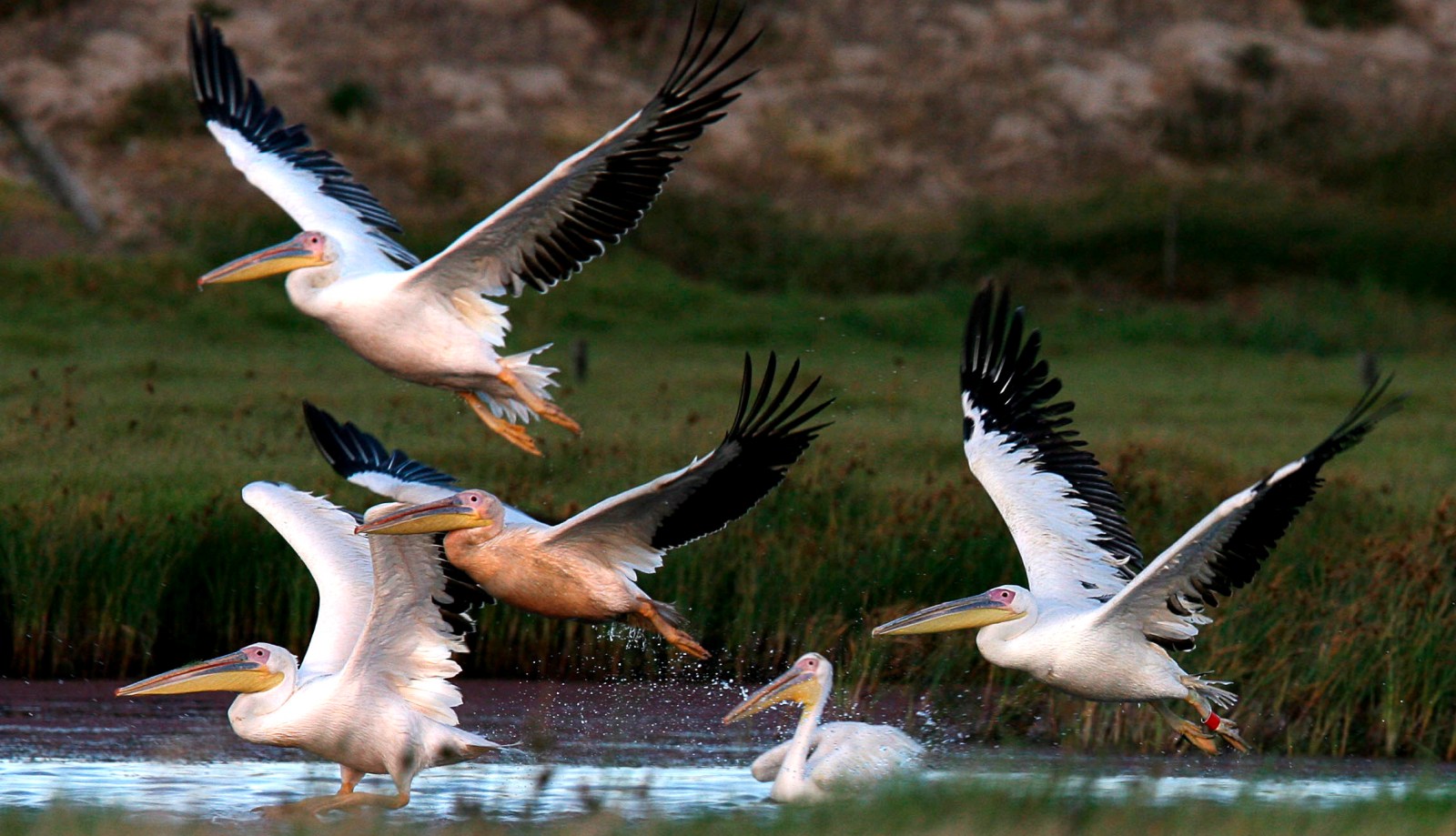 Pelicans take off at dawn from the Rietvlei Wetland Reserve in Cape Town on 5 January 2007. (Photo: EPA/Nic Bothma)

South Africa’s wetlands are in a critical state – although steps are being taken to better conserve these ecosystems.

Existing wetlands make up about 2.4% of South Africa’s surface area, but only 11% of them are protected. In a water-scarce country, protecting wetlands is key to ensuring better water quality.

Despite the small area covered by wetlands, they contribute R4.2-billion per year to South Africa’s economy. They are key points for development, tourism, recreation, supporting biodiversity, livelihoods and marine fisheries.

The Berg Estuary, which was declared a Ramsar site on World Wetlands Day, contributes about 60% of the estuary habitat on the West Coast and plays a pivotal role in biodiversity and cultural and economic activities. It is the second wetland in South Africa to be declared a site of national importance in two years; the Ingula Nature Reserve in the northern Drakensberg was the last declared Ramsar site in 2021.

“The declaration of South Africa’s 28th Ramsar site is an indication of the importance of conserving and protecting these unique environments that are considered super ecosystems because of their contribution to the provision of water and because they provide habitats to a large variety of migratory birds, especially water birds,” said Minister of Environment, Forestry and Fisheries Barbara Creecy.

The 2019 National Biodiversity Assessment concluded that wetlands have the highest proportion of threatened ecosystem types as well as the least-protected ecosystems. Wetlands play an important role in water conservation since the poor flow of water through the ecological systems makes expensive water treatment necessary.

According to the Department of Environment, Forestry and Fisheries, wetlands play a role in supplying water that sustains 60% of the country’s population, more than 90% of urban water users, 67% of national economic activity and 70% of irrigated agriculture.

Known for being marsh pits of still water – between aquatic and terrestrial systems supporting vegetation adapted for saturated soils – wetlands function as water-purifying bodies. They play a role in slowing down flood waters, are natural filters and provide food and shelter for nearby animals.

Wetland ecosystems are threatened mainly by invasive alien species, erosion, developments in and around them, pollution and excessive nutrients, slash-and-burn agriculture and mining.

Conserving them is of great importance as the world is losing them three times faster than forests, with nearly 90% of them having degraded since the 1700s, according to Ramsar.

Verlorenvlei is among the most important wetlands and the largest on the West Coast, at 13.5km long and 1.4km wide. The system has been reported to be drying up, with the surface water in the vlei being saline and unusable. The vlei houses more than 4,000 birds and is a space of significance for conservation of the birds and other biodiversity.

Last year, in an effort to improve Cape Town’s water bodies, the City of Cape Town restored an old wetland, the Zandvlei estuary. The improvement of the Muizenberg vlei aimed to revive the wetland habitat, though residents had concerns about the vlei being polluted, as another in the area had been.

One of the country’s biggest wetlands, iSimangaliso Wetland Park, which was listed as South Africa’s first World Heritage Site in 1999, will be on the receiving end of space-based sensors for wetland monitoring.

The three-year project, funded by the Water Research Commission and led by the Council for Scientific and Industrial Research, will focus on the Maputaland Coastal Plain. Wetlands make up a quarter of the coastal plain, an area rich in wetland biodiversity, swamp forests, mangroves and floodplain forests, grass and sedge wetlands.

The plain is in northern KwaZulu-Natal, running along 8,000km2  of the eastern coastline. The focus will be on monitoring changes in wetlands that are often hidden beneath forest canopies and other vegetation, or exist as temporary pans following rains.

The Water Research Commission’s research manager overseeing the project, Bonani Madikizela, said: “Many of the wetlands of the Maputaland Coastal Plain are under severe stress, yet they are so important to the marginalised sectors of our communities that rely on them for food and other ecosystem services.”

Dr Heide van Deventer, who is leading the project, said remote sensing could be valuable for monitoring the coastal plain’s wetlands as these can be difficult to access due to muddy conditions and potential encounters with hippos, crocodiles, buffaloes and elephants.

“Areas in need of rehabilitation could be more easily identified and prioritised [through the programme]. If successful, the intention is to incorporate this capability into the National Wetland Monitoring Programme.”

Despite wetlands taking up less than 3% of South Africa’s land, the benefits they provide are proportionately high as they provide water purification, nutrient cycling, carbon storage, storm protection, recreation and harvesting of food directly from nature. Protecting them could be of utmost importance for not only biodiversity, but also for the country’s water quality and resources, and society at large. DM/OBP