West Coast’s Verlorenvlei: What’s lost when a wetland dries up? 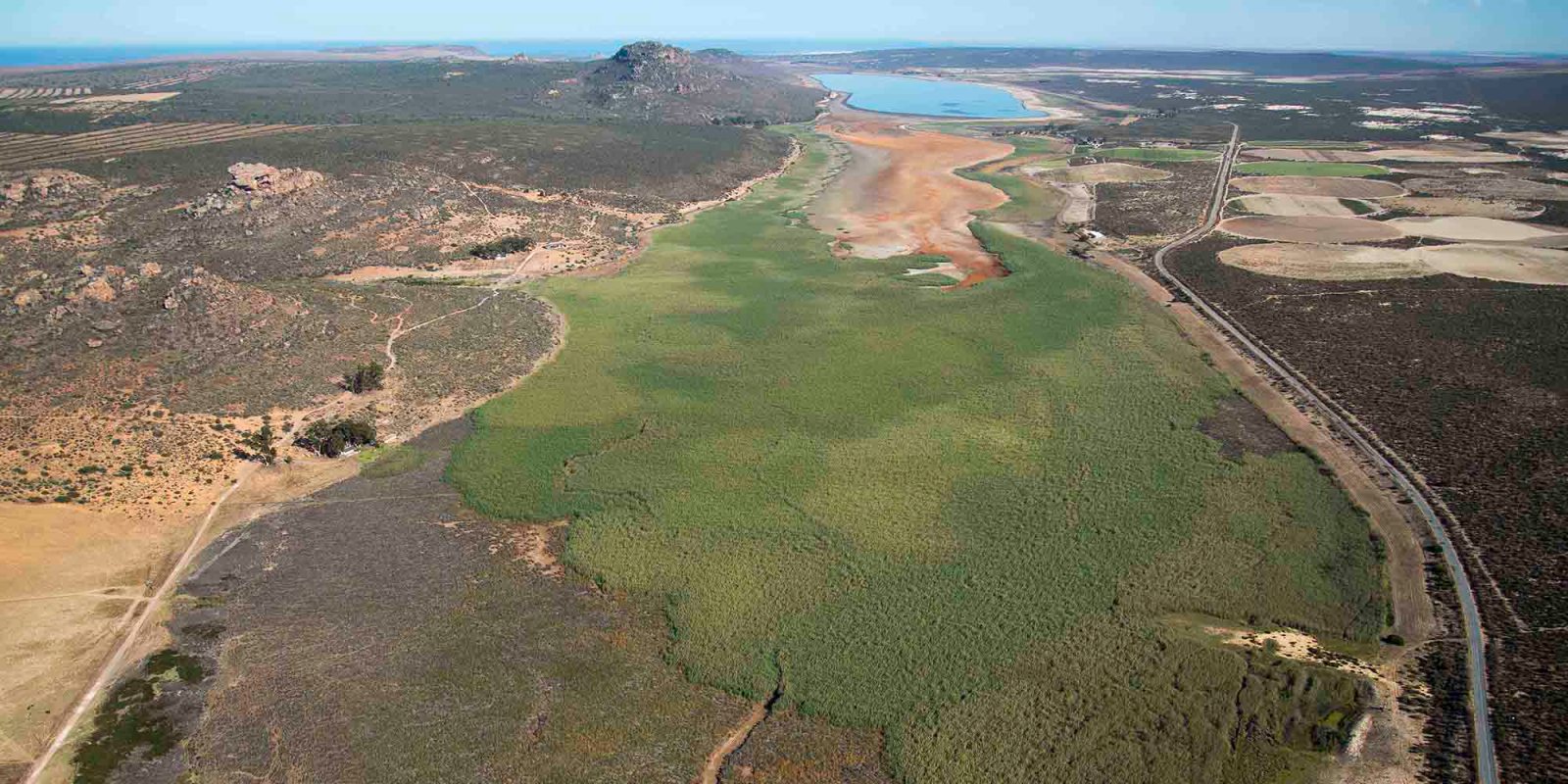 Part of Verlorenvlei in February 2019 when most of the vlei in the foreground was already dry. (Photo: John Yeld)

There’s no argument that the Verlorenvlei wetland on the West Coast is an ecologically significant place – but how the catchment area is managed is at the heart of a row between conservationists and farmers.

Lonely but lovely Verlorenvlei on the West Coast is among the brightest of the 26 natural gems in South Africa’s rich crown of globally significant wetlands.

This spectacular vlei is a designated Ramsar site under a 1971 international treaty for the conservation and sustainable use of wetlands – arguably the most threatened of all natural ecosystems.

Technically, Verlorenvlei is defined as a partially closed coastal estuarine lake and marsh system rather than as a conventional wetland. But it was proclaimed as Ramsar site number 525 on 28 June 1991 under the Ramsar Convention on Wetlands of International Importance Especially as Waterfowl Habitat (usually shortened to the Convention on Wetlands).

Stretching between the villages of Elands Bay and Redelinghuys about 25km south of Lambert’s Bay, Verlorenvlei is also listed by BirdLife International as an important bird and biodiversity area – a place of international significance for the conservation of birds and other biodiversity. It supports at least 189 bird species, of which 75 are waterbirds. The vlei occasionally hosts more than 4,000 birds and the highest number recorded in a single count was 11,891.

Trouble is, the 13.5km-long Verlorenvlei has been drying up over several years and, currently, the huge 1,400ha Ramsar vlei area is little more than a massive dust bowl.

One of South Africa’s few coastal freshwater lakes and among the most important estuarine systems in the Western Cape, the Verlorenvlei system lies in a winter rainfall area. If sufficient rain falls in the catchment, the vlei fills and sometimes overflows into the sea through its estuary in Elands Bay. Normally, it has an average depth of about 3m and a maximum depth of around 4.5m during the wet season. In summer, it gradually desiccates as part of its natural cycle.

But four years ago, on 24 October 2017, the Department of Human Settlements, Water and Sanitation’s water meter on a jetty extending into the vlei registered zero – and, according to the Friends of Verlorenvlei conservation group, it has remained there.

The little surface water in the vlei became so saline as to be unusable. When World Wetlands Day was celebrated on 2 February, just a few small open patches of water remained.

The Friends group, which has been arguing for formal protected status for Verlorenvlei for many years, has initiated a campaign to raise awareness about the vlei and tackle what it sees as major problem areas, particularly excessive abstraction for agriculture.

“Over the past four decades, the greater catchment of the vlei has been plundered via untrammelled abstraction of ground and containment of surface water. It will be up to civil society to fight and win. If we fail, no more surface water will reach the vlei,” says Felicity Strange, group secretary of the Friends group.

The Friends group’s concerns are not fully shared by CapeNature, the Western Cape’s conservation authority and nominal manager of the state-owned vlei. The organisation ascribes the vlei’s desiccated appearance to a natural occurrence: the recent major drought in the province.

“We’ve just come through a four- to five- year drought that was quite severe, but that’s part of the natural cycle for estuarine lakes,” says Pierre de Villiers, CapeNature’s senior manager: marine and coasts operations. “We are in an extreme time and people are getting pretty emotional. I do understand that. But the vlei is not in a bad state. It looks bad but it has been just as dry two or three times previously that I can remember. But I’m not brushing off people’s concerns. If there’s a challenge, we will deal with it.”

CapeNature acknowledges that a decade-old study of the vlei is past its sell-by date and a new water reserve study has been commissioned. De Villiers says this study will be key to future effective management of Verlorenvlei by assessing current flows in the catchment and required flows to maintain the ecological integrity of the system.

“That will be our blueprint going forward to balance the various water uses and requirements.” The results of the reserve study are unlikely to be available in the short term.

De Villiers notes that both potato farmers and citrus growers in the region stand accused of excessive water use, but suggests such accusations are unwarranted. While agreeing that their irrigation methods look bad, he says a study has shown that potato farmers’ use of deep groundwater from boreholes doesn’t affect the shallow vlei, which has a clay lining, while citrus growers’ use of micro-irrigation techniques and shade cloth has reduced water consumption.

Despite such reassurances, it’s clear that problems remain.

Verlorenvlei’s catchment covers about 1,890km² and comprises four main tributaries. Arguably the most important of these is the Krom Antonies River, rising in the Piketberg mountains in the south and draining the rich Moutonshoek valley farming area.  BirdLife SA says key threats to Verlorenvlei and its biodiversity include increasing water abstraction and agricultural intensification.

So it’s not surprising that an application by a Redelinghuys farm company for post facto condonation of its illegally constructed farm dam within the Verlorenvlei catchment is under close scrutiny from locals. The company’s stated intention to more than quadruple the size of the dam has raised the ire of the Friends of Verlorenvlei group.

In October last year, Piekenierskloof Vrugte submitted a Section 24G application in terms of the National Environmental Management Act for the rectification of the unlawful clearance of vegetation and enlargement of the Namaquasfontein Skool Dam on its farm. The dam is in the catchment of the Krom Antonies River, several unnamed tributaries of which run through the farm.

The application was made to the provincial environmental authorities because the R4.1-million dam had been upgraded without the required environmental approvals.

It involves the rectification of the 2017 phase one enlargement of the dam, from an original 1,000m³ to its current 47,000m³, with a 6.2m-high wall. It also involves a 250mm diameter pipeline, about 1.8km long, extending from the Krom Antonies River as well as two minor river crossings and a river abstraction point. The farm owner further proposes a phase two enlargement of the dam to a storage capacity of 200,000m³ behind an 11.5m-high wall.

According to a specialist freshwater impact assessment of the dam project undertaken by Somerset West consultants as part of the section 24G application, the dam is an “off-channel” structure filled via a pipeline from the Krom Antonies River and from existing boreholes.

The specialists point out that the ecological status of the Krom Antonies River in its reach at Namaquasfontein farm is “moderately to largely modified”, with the main impacts largely caused by land-use activities, as well as the upstream land and water use.

They conclude that the impact of the enlarged Namaquasfontein Skool Dam and its further enlargement will pose only a “moderate” risk to the Krom Antonies River system, provided mitigation measures are applied: “There is no reason why the existing and proposed activities should not be approved from an aquatic ecosystem point of view. This is provided that the recommended mitigation measures are implemented.”

The overall view of the environmental consultants managing the Section 24G application is that construction of the dam “does not have any unacceptable negative impacts on the biophysical and socioeconomic environments, and is supported by the freshwater, botanical and heritage specialists”.

The Friends of Verlorenvlei group is formally objecting to the application, in particular to the proposed expansion of the dam. It has slammed the absence of any consideration of the ecological impact on the bigger Verlorenvlei picture.

“In the 21st year of the 21st century when global fresh water scarcity is widely acknowledged, it’s hard to believe that environmental consultants and their associated experts are so ignorant of the implications of rampant water abstraction and containment in the Greater Verlorenvlei Catchment,” says Nick Taylor, acting chair of the Friends group.

The application is still undergoing a public participation process and updated assessment documentation will be released for review and comment, probably this month.

As part of the application process, the provincial environmental authorities will levy an “administrative” fine on Piekeniers- kloof Vrugte before it takes any decision on whether to condone the illegal dam. Section 24G fines can be substantial: as high as R5-million or 10 years in jail, or both.

De Villiers says CapeNature does not support any extension to the Namaquasfontein Skool Dam or any increased water abstraction from the Verlorenvlei catchment before the water reserve study has been completed. DM168

West Coast’s Verlorenvlei: What’s lost when a wetland dries up?