SA government claims it has been consistent on the Pale...

SA government claims it has been consistent on the Palestine question 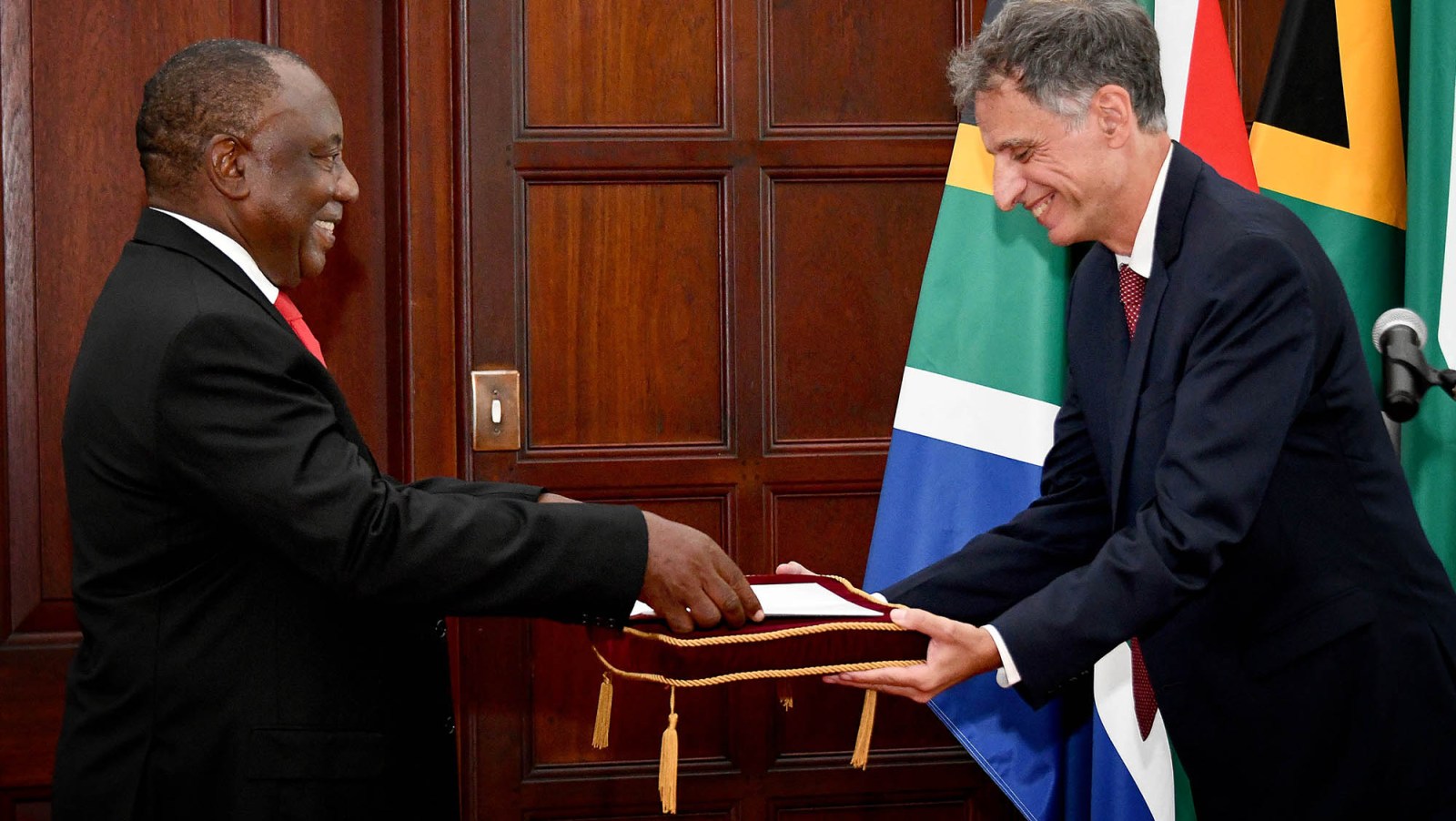 The arrival of a new Israeli ambassador has sparked a row.

The South African government walked a fine line this past week, between renewed hardline demands that it break off relations with Israel and pragmatic concerns about the economic and international reputational losses this would probably incur.

The standoff was sparked by President Cyril Ramaphosa accepting the credentials of a new Israeli ambassador to South Africa, Eliav Belotsercovsky.

That prompted outrage in some quarters. In response, the South African government issued a statement that some interpreted as hinting that Pretoria could soon break off relations with Israel completely. But that seems unlikely and the statement appeared rather to be intended to placate the hardliners within the ANC and the tripartite alliance.

The controversy began when Ramaphosa accepted Belotsercovsky’s credentials in a ceremony on Wednesday, where 12 other new ambassadors also presented him with their “Letters of Credence”.

The Presidency tweeted an announcement including pictures of a smiling Ramaphosa with the Israeli ambassador — similar to tweets it issued for each of the ambassadors whose credentials he accepted that day.

The SA Jewish Board of Deputies (SAJBD) commended Ramaphosa for accepting Belotsercovsky’s credentials.

“The SAJBD has consistently expressed the belief that our government can play an important and unique role in peace-making efforts between Israelis and Palestinians,” it said.

“Hopefully, the commencement of the new Israeli ambassador’s term will signal a change, resulting in South Africa re-engaging in the region and having a positive influence in achieving a negotiated two-state solution.

“South Africa is well-placed to help their Palestinian friends engage with Israel and assist them to attain independence in their own state, alongside the Jewish state, within secure, mutually agreed borders.”

But the South Africa BDS (Boycott, Divestment and Sanction) Coalition which represents pro-Palestinian, anti-Israeli South Africans, retweeted the Presidency’s tweet with the comment that “this is what normalisation looks like — ashamed of SA Pres shaking hands with representative of apartheid while Israeli government intensifies ethnic cleansing in Palestine — @PresidencyZA cut all ties and isolate apartheid Israel — it worked to get rid of apartheid SA!”

Some other commentators on Twitter suggested the South African government was being inconsistent or hypocritical for accepting a new Israeli ambassador, while at the same time not appointing a full South African ambassador to Israel, to effect its decision to downgrade relations.

Department of International Relations and Cooperation (Dirco) spokesperson Clayson Monyela reacted to the controversy with a statement that tried to explain and justify the government’s position on Israel.

He insisted that South Africa had maintained a consistent position on the Israeli-Palestine question.

He noted that Pretoria did not currently have an ambassador in Israel. It had decided in 2018 to recall its ambassador “as part of processes to downgrade our diplomatic presence in Israel”.

Nevertheless, he noted that post-apartheid South Africa and Israel had maintained formal diplomatic ties to date. This had “allowed South Africa to play a role with its international partners in the ongoing efforts to end the occupation of Palestine”.

But he added that South Africa had also been “consistent and unwavering in its principled support for the struggle of the Palestinian people in their struggles against occupation”.

“Our country draws a direct parallel between the former apartheid regime and the Israeli occupation of Palestinian land.” South Africa considered Palestine, like Western Sahara, as “unfinished decolonisation struggles”.

Monyela said the government had backed Palestine’s cause at every opportunity on the world stage. And over the past two years, South Africa had stepped up pressure on Israel. This included catalysing discussions on whether Israel was committing the crime of apartheid.

At the next session of the Human Rights Council in Geneva, Michael Link, the Special Rapporteur of the Occupied Palestinian Territories (OPT) would be releasing his report on the crime of apartheid in the OPT.

“His findings, together with a possible legal opinion from the International Court of Justice on the same matter may lead to South Africa and indeed all other countries, based on respect for international law, to review its diplomatic stance in relation to the government of Israel,” Monyela said.

“The situation is dynamic and South Africa will ensure that its diplomatic presence is strategic and geared towards ending the occupation,” Monyela said.

“South Africa is determined to continue working with the international community to launch a credible, time-bound, multilaterally-sponsored political process to resolve the issue of the Palestinian cause based on international law.”

Monyela’s statement that SA might review its diplomatic stance on Israel appeared to be a hint that Pretoria could sever or at least further downgrade diplomatic relations with Israel, depending on Link’s findings.

But this seems unlikely, according to observers, who believe that Pretoria is very aware that completely cutting relations with Israel would have significant economic repercussions, in part because of the important role which Jewish business people play in the South African economy.

Pretoria is also concerned about the negative impact such a break might have on its relations with the international community, including investors. And it also wants to keep open the possibility of making some sort of contribution to reconciliation efforts between Israel and Palestine. It hasn’t done much in that direction anyway — in part because it is perceived as pro-Palestine and anti-Israel and therefore not an independent mediator. But severing diplomatic relations with Israel could abruptly terminate any chance at all of playing a mediation role.

Against that backdrop, Monyela’s strong statement was probably intended to placate not only the vocal BDS faction, but more particularly the hardliners within the ANC and tripartite alliance. They were the ones responsible for adopting the tough resolution on Israel and Palestine at the December 2017 elective ANC conference at Nasrec which directed the South African government “to immediately and unconditionally downgrade the South African embassy in Israel to a liaison office”.

That has not quite happened. When the term of SA’s ambassador to Israel, Sisa Ngombane, expired in 2018, the government did not renew it, effectively downgrading the embassy a notch. But it has not reduced the embassy to a mere liaison office. It still functions as an embassy.

And so with the next ANC elective conference looming in December this year and Ramaphosa likely to face criticism from his rivals in the RET faction that he has not fully implemented all ANC Nasrec decisions, a strong anti-Israel statement served the purpose of demonstrating that the government was still ideologically in line with the governing party. DM