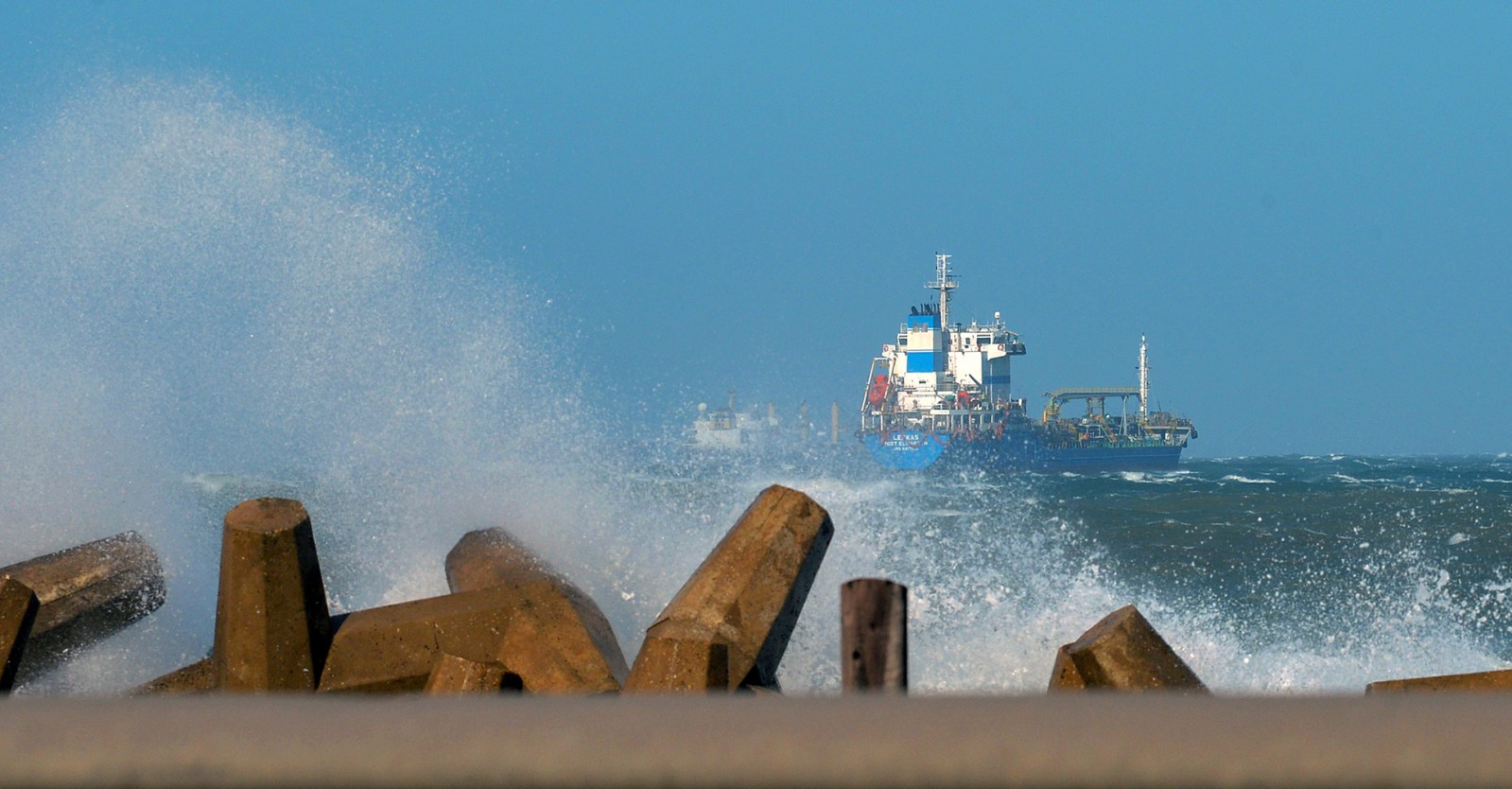 Storm surges, fuelled by rising sea levels due to global warming, are set to create havoc in Nelson Mandela Bay in the Eastern Cape by 2040. (Photo: Deon Ferreira)

Severe storms, water shortages, extensive damage to infrastructure and threats to marine life will become part of life for Nelson Mandela Bay residents in the next 18 years. This, as the metro starts to suffer the effects of climate change, according to an assessment done by one of Africa’s foremost conservationists.

‘We are shouting as loudly as we can. It is a serious, present and clear threat – but we can substantially reduce the risk,” said Andrew Muir, the author of a new scenario on the impact of climate change in Nelson Mandela Bay, the Eastern Cape’s biggest metro.

“It is important to move forward with hope and implement the actions which are within our control.”

Muir, recognised in 2012 by the World Economic Forum for his work in social entrepreneurship, is a well-known conservationist in South Africa. He is the CEO of both Wilderness Foundation Africa and Wilderness Foundation Global, as well as previous president of the Nelson Mandela Bay Business Chamber.

“Business needs to take a more proactive approach. We need to change fast,” Dotwana said. “Given the enormity of the impact, it should be a province-wide initiative.”

Muir said he was not a climate change expert but had access to experts when drawing up the latest scenario for the metro. He is an adviser to the World Economic Forum and serves on some of its task teams.

The Nelson Mandela Bay metro, combining the city of Gqeberha and the towns Uitenhage and Despatch, is the province’s biggest metro and home to two ports – Port Elizabeth harbour and the deep-sea port of Ngqura.

According to the latest report from the Eastern Cape Socio-Economic Consultative Council, published on 26 January 2022, the provincial economy contracted by 6.9% in the third quarter of 2021.

The Eastern Cape currently has an average unemployment rate of 47.4%, and Nelson Mandela Bay saw an increase in unemployment during the third quarter of 2021 from 39.8% to 40.7%.

The N2 highway runs alongside the sea in parts of Nelson Mandela Bay and Muir said the severity of storm surges might be such that the road would eventually have to be repositioned.

He said the best-case scenario for the metro was for global warming of 1.5℃ by 2040, given the current trajectory, but globally the increase in temperature is currently at 1.1℃. He added that this could be much higher by 2040 and, given its geography, sub-Saharan Africa will see a higher rise in temperatures.

As a result of global warming, he said, there will be more times of extreme drought and extreme heat, and more frequent and more intense weather events, with the past nine years being the warmest recorded in history.

Muir said Nelson Mandela Bay remains one of the most segregated metros in the country, and as a result there would be a disproportionate impact on poorer communities.

“Our biggest threat to the coastal areas will come from the ocean.” This, he added, is a threat that carries through to the nearby towns along the Eastern Cape coast.

“Our biggest storm surges are getting worse every year,” Muir said, adding that a rise of a few millimeters in the ocean will quickly become a few feet during a storm surge.

Nelson Mandela Bay, he explained, is faced with a particular challenge. While it is only the fifth-largest metro, it is the second largest in terms of urban sprawl.

“A massive environmental event (like a storm or floods) will cause extensive and widespread damage. There will be no funds to replace infrastructure continually damaged by extreme events. This will have a compound effect and is a cause of very serious concern.”

He foresees residents having to queue for water from tankers as tap water will become increasingly unavailable. “We are already seeing it in India.”

Muir mentioned recent storm damage to the town of Addo in the Eastern Cape, where the municipality is currently struggling with repairs.

“We don’t want to hear this, but we must be forewarned.”

He said as acid builds up in the ocean due to temperature increases, there will be an increase in red tide (a harmful algae bloom with a serious impact on marine life). This will in turn affect the metro’s fishing industry and the dolphins, whales and penguins that are major tourist attractions in Nelson Mandela Bay.

Muir said two other seaside metros, Durban and Cape Town, both have plans to mitigate against climate change. “We need one,” he said, stressing the need for a multistakeholder task team to address the imminent crisis.

“Planning will be key,” he said. For instance, spatial planning must take into account the dangers of global warming. “We know where the flooding is going to be.”

Muir said the creation of soft buffers will be absolutely crucial.

“Durban has done this perfectly,” he said, adding that the rehabilitation of existing dunes was a “cheap and easy” way to start the fightback against climate change and can provide employment to a lot of people.

For Nelson Mandela Bay specifically, he said the Baakens River can serve as a way to control flooding, but that it is currently clogged by vegetation.

He said the Baakens River Valley also served as a natural carbon sink and would help protect the town from getting hotter.

He mentioned the example of parks and gardens planted around Florida in the United States that will serve as natural drainage zones in the event of flooding. “And it is pretty,” Muir added.

He also emphasised that the more renewable energy that can be procured locally, the less vulnerable the metro will be to extreme weather events.

“The secret is self-reliance.”

In 2021, the Business Chamber, following a bout of extensive electricity outages likely caused by sabotage or vandalism, adopted a programme where businesses assumed responsibility to protect the substations in their areas of operation. Muir said to address the possible ravages of severe weather events, this should be extended to businesses also adopting roads and water pipelines.

He said the harvesting of rainwater should be incorporated into municipal regulations. “A lot of water is going to fall. We must be able to capture it.”

In addition to this, he added, boreholes must be monitored and controlled to prevent the fresh water aquifers beneath the metro from being contaminated by salt water.

“This would cause permanent damage. There is no way to reverse it.”

While some rainfall over December saved the metro from a festive season Day Zero, the water situation in the area remains critical.

Garth Sampson from the South African Weather Service said they are not expecting any significant rain, and the region was heading for a new record dry January.

He said there was money available to address the problem of climate change but the metro must ask for it, and, given the threat level, civil society should also start lobbying at every level.

“This is a call to arms for action,” he said.

Muir said the Eastern Cape was flagged by the United Nations as particularly suitable for mass restoration and rehabilitation projects, in part due to Spekboom and subtropical valley thicket, and as part of carbon sequestration and climate mitigation.

“Many of these climate change initiatives could potentially be paid for by the rest of the world,” he said, “but we need the politicians to move with speed and adopt the appropriate plans which will attract funding.”

Muir said while their forecast is that the situation will “get really bad” by 2040, the 18 years until then will see an increase in the number of serious weather events.

A report commissioned by the Centre for Environmental Rights, written by clinical psychologist Garret Barnwell, also highlighted the great impact that climate change will have on mental health.

“The youth, children, women, those living close to power plants and rural communities of this and future generations, are most at risk as they shoulder the burdens of global climate.

“Furthermore, more than half of the total population of South Africa is living in poverty, and this socioeconomic vulnerability makes it extraordinarily difficult for the majority of South Africans to adapt to the advancing climate shocks.

“Children and future generations are particularly vulnerable. Affected children are likely to have extra challenges at school, such as impaired concentration and being emotionally overwhelmed. Children can turn these feelings inwards and experience profound sadness, loss, helplessness or hopelessness, or they can turn these feelings outwards in destructive ways… Some may engage in destructive behaviour or try to self-soothe by resorting to overmedicating or drinking excessive alcohol.

“One of the most significant risks of the climate crisis is people killing themselves because they feel overwhelmed by distress and financial pressures… that there is no hope, and their sense of support, community and the world has transformed for the worse.” DM/MC