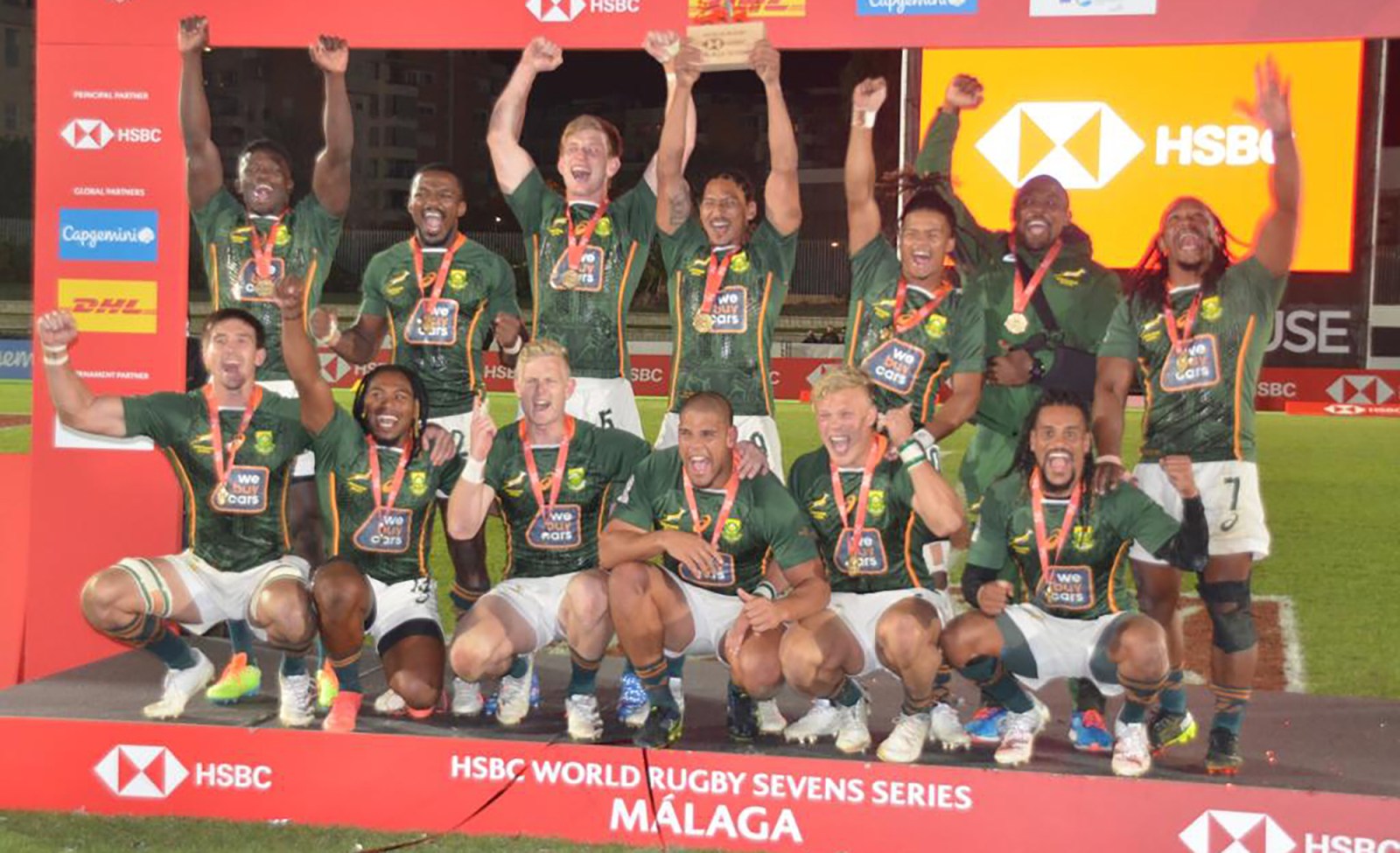 The Blitzboks continued to thrive in the absence of Fiji and New Zealand by claiming their fifth consecutive HSBC World Sevens Series title in Malaga on Sunday.

An adage in sport is that, “You can only beat what’s in front of you.” The Blitzboks have taken that mantra to heart as they won their fifth consecutive World Sevens Series title and their third of the 2021/22 season in Malaga on Sunday.

After back-to-back wins in Dubai in the first two legs of the campaign last December, the Blitzboks added the maiden Malaga title to their growing list of accomplishments. They also won the only two tournaments of the Covid-shortened 2021 season in Canada, to cement their status as the outstanding team in the world right now.

The Blitzboks have a maximum 66 log points from three tournaments and will start next week’s Seville tournament as overwhelming favourites. Coach Neil Powell’s challenge is to ensure no complacency creeps in, and if their winning streak indicates anything, it’s that he has been successful in achieving that so far.

In Malaga, Selvyn Davids’ dramatic winning try against Argentina, scored 90 seconds after the hooter had sounded, gave the Blitzboks a deserved title with a 24-17 victory, and stretched their match-winning streak to 29.

The final against the impressive Argentineans was the closest South Africa came to having that streak snapped on the World Series circuit this season. After completely dominating the pool stages and the quarters and semis, the Blitzboks were not at their best in the final. But even playing below their own high standards, they are formidable.

They had cruised into the final with pool stage wins over Scotland (27-7) and England (43-0). In the knockouts, they beat Canada (14-0) and Australia (19-0) to underline their defensive mastery as well as their attacking flair.

Despite conceding a try early in the final and uncharacteristically missing 11 tackles in the first half as the Pumas rattled the Blitzboks with their aggressive ball-carrying, the Blitzboks still led 7-5 at halftime. They were in control of the scoreboard, if not the tempo and style of the match.

The second half started well for the Blitzboks. Zain Davids created a brilliant turnover and JC Pretorius was over the line in a flash. The conversion went wide, but the lead was 12-5, meaning that Argentina needed two scores to regain the lead.

It took them only a minute to do that.

Joaquin de la Vega scored and from the resulting restart, gathered the ball to score his second try, which suddenly handed the Pumas a 17-12 lead with three minutes to play.

The replacements again came through for the Blitzboks though, and from sustained pressure Justin Geduld dotted down in the corner to draw level at 17-17 with 30 seconds left on the clock.

A final push by South Africa saw Davids racing through to score the match and tournament-winning try two minutes after the final buzzer. Geduld kicked the conversion for good measure.

“Whenever you play Argentina you know it’s going to be scrappy,” Powell said. “It will never be a game where you play the ball wide and have an easy breakdown. They are a hard-working team that feed off the scraps because they make it untidy.

“One of the characteristics of this team is that they never get flustered, even when they are behind with only seconds on the clock. If there is one more opportunity to get the ball in hand, I will always back this team with the playmakers we have.

“We’re happy to win that one because they are getting better and when you play them [Argentina] you have to fight for every inch.

“It was also a difficult build-up because we have five replacements in the team from Dubai. They all came back from injury and were a little rusty — which we saw with some judgment errors and falling off a few tackles.

“I’m proud of the team and although winning five tournaments in a row is good, that has only happened because the guys look after the standards we set and the effort we put in. They look after the system and that’s what we demand.”

No New Zealand, no problem

There has been some minor grumbling that the Blitzboks are padding their record because New Zealand have not played in the past five tournaments due to Covid restrictions and have not travelled outside their country.

New Zealand are historically the circuit’s most successful team, but in recent years they have been second best behind the Blitzboks and Fiji.

The Fijians did make the trip to Spain and were in Dubai too, and were drawn in the same pool as the Blitzboks in Malaga. But they withdrew hours before the tournament started due to several positive Covid cases in their squad.

That no doubt made South Africa’s passage slightly easier, but they could only beat what was in front of them.

The Blitzboks have many new faces and are also an evolving team — which makes their current streak even more impressive. Their style of play is also the envy of the circuit.

They are ruthlessly efficient at the breakdown and players almost always make the correct decision when to contest the ball and when to extract themselves from the fight on the deck and realign the defence. On attack, they’re patient and have many variations.

From striking with width and passing, to sending big runners into midfield contact to try to break a defensive line, to kicking deep to turn defenders, the Blitzboks always ask tough questions of opponents.

For now, no team has managed to find all the answers. DM