Workers and security guards clash outside Clover plant in Ekurhuleni 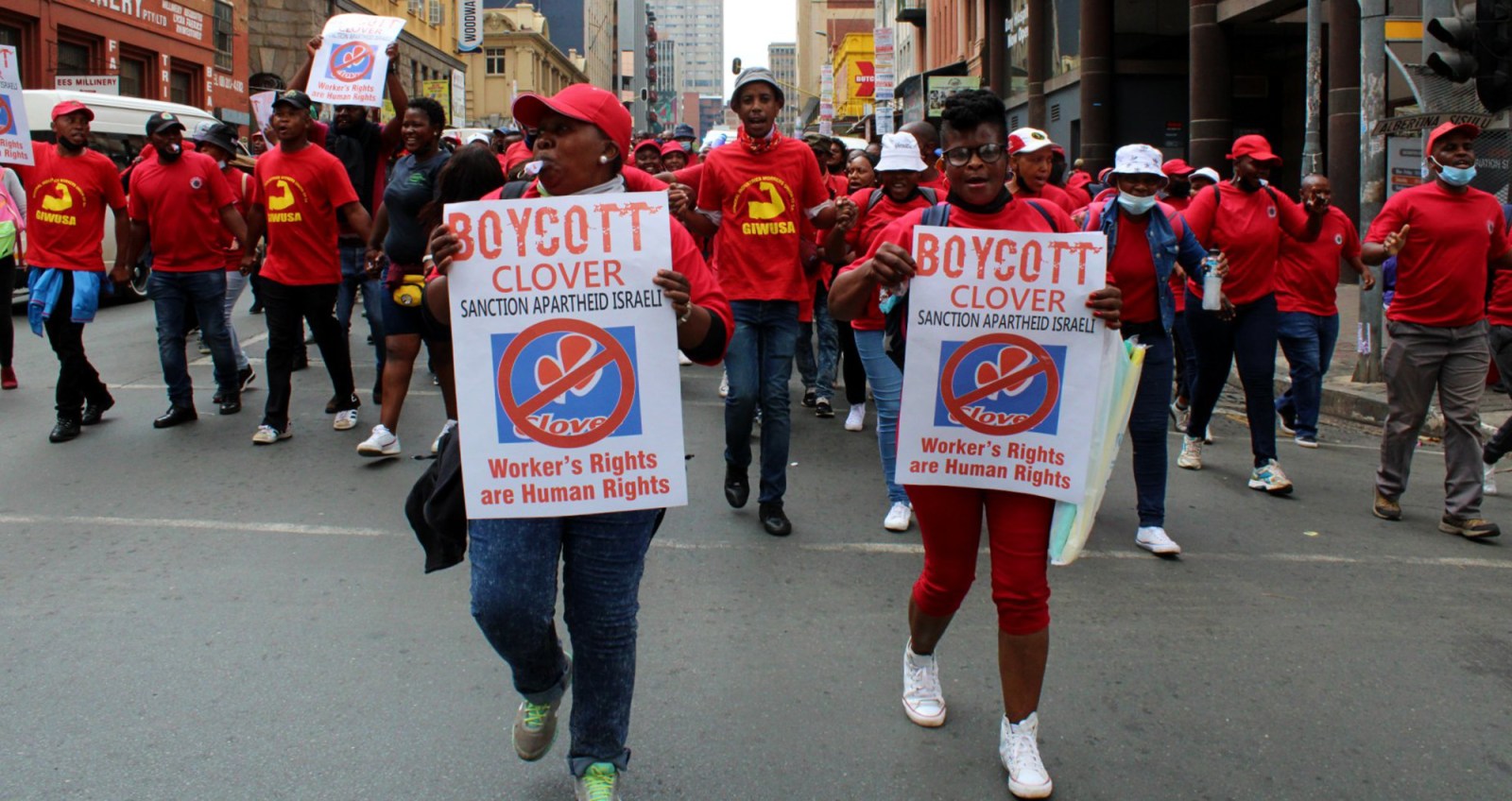 Clover workers, who have been on strike since November 2021, march through Johannesburg on Tuesday. (Photo: Masego Mafata)

The Giwusa union national organiser Charles Phahla says the ‘escalation of hostilities on the part of the company’ was a bid to undermine any intervention from the Department of Trade, Industry and Competition.

Striking workers say private security guards fired rubber bullets and tear gas at them outside the Clover plant in Clayville, Ekurhuleni, on Tuesday.

Workers have been picketing outside Clover factories and plants as part of the strike since November last year.

Marriam Mamabolo, a General Industries Workers’ Union of South Africa (Giwusa) shop steward, said she was preparing to hand out food parcels to about 300 workers when she heard gunshots.

“We were outside the plant, dividing workers into groups to give them food parcels, when they started firing shots and tear gas. People started to run away but some of us couldn’t so we choked on the fumes from the tear gas,” she said.

Mamabolo said some workers were injured. The group had scattered after the first few shots were fired, she said.

In a statement released by Giwusa on Wednesday, the union claimed that Clover had “staged this shooting” to support the company’s urgent application to interdict the strike. The application will be heard at the Labour Court on Friday, according to Giwusa national organiser Charles Phahla. A request to Clover to confirm this had not been answered by the time of publication.

Phahla said the “escalation of hostilities on the part of the company” was a bid to undermine any intervention from the Department of Trade, Industry and Competition. The striking workers picketed outside the department’s Pretoria offices last week, calling for intervention to stop job losses.

Clover said no instruction had been given to security guards to shoot at the workers.

GroundUp contacted the security company involved for comment, but no response had been received by the time of publication.

Meanwhile, Clover has said that employees’ 13th cheques were processed and paid last Friday after workers managed to secure an agreement with Clover at the Commission for Conciliation, Mediation and Arbitration (CCMA) that overdue bonuses would be paid.

“The order from the CCMA to do so was never necessary, as Clover would always have paid the bonuses once it knew what the amounts of the deductions would be,” said Velthuysen.

Many workers told GroundUp yesterday that they had not received the full amounts when their bonuses were paid, but Velthuysen said this was because the company had deducted money for days not worked in November during the strike. He said other deductions also had to be made from bonuses instead of salaries because workers have not been receiving their salaries since the strike started.

“The deductions were discussed in full at the CCMA meeting, and the unions were well aware that there were going to be deductions. It is unclear why the unions did not communicate this to the workers,” said Velthuysen. DM