‘If I don’t get my medication I am going to die’: Residents decry shutdown of Thusong District Hospital 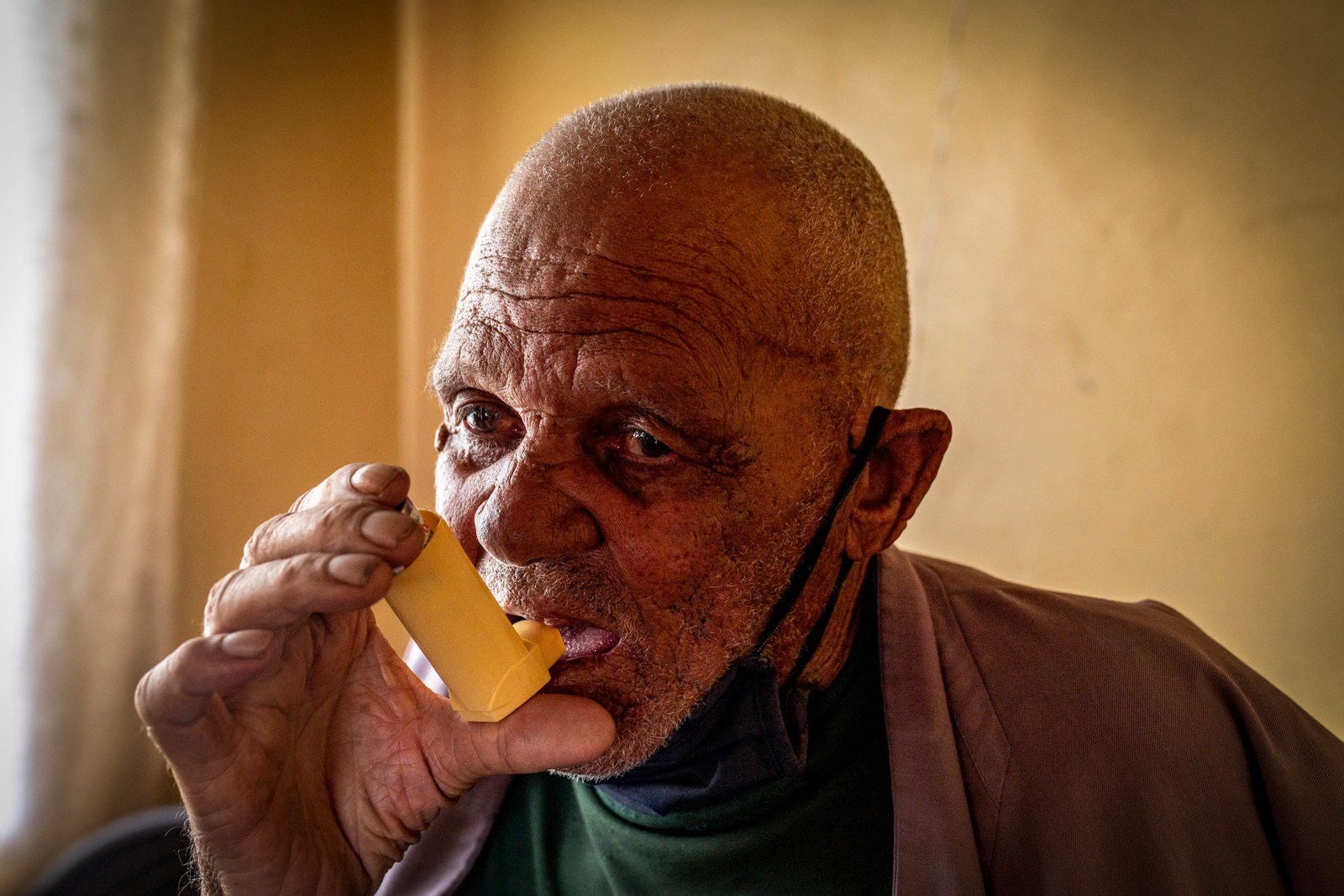 Asthmatic Gabriel Moletsane sometimes relies on his son to collect his medication from Thusong District Hospital when he is too sick to go himself. He is unhappy at the closure of the hospital. (Photo: Shiraaz Mohamed)

Built in 1968, Thusong District Hospital came under the spotlight because of the poor state it was in, but despite deteriorating conditions, the hospital served as a lifeline for nearby communities.

The hospital, which is located between Mahikeng and Lichtenburg, was abruptly shut down after the evacuation of about 20 patients from the 120-bed facility on 14 January following reports of excessive heat emanating from beneath the pharmacy floor at the hospital.

The North West Department of Health released a statement a few hours later announcing the evacuation. North West Health MEC Madoda Sambatha said: “We know that Thusong Hospital was built on dolomitic soil… and the infrastructure condition is currently in a total despair despite efforts to maintain the infrastructure. We therefore have to act decisively when we observe unusual activity on the ground or the infrastructure.”

Sambatha pleaded with the community and families of patients who were moved to other hospitals to “remain calm because the department was proactively taking this precaution with the best interest of patients at heart”.

A few days later, fears of a permanent shutdown spread like wildfire. While there was no official announcement from the Department of Health, community members and some healthcare workers were concerned.

District Manager Nomvula Legobye on Monday assured healthcare workers at the hospital that, “No one will lose their jobs; you will remain public servants.”

A nurse, who spoke to Daily Maverick on condition of anonymity, said: “It’s upsetting… and we have to move further from where we are working now. It’s a strain on our pockets. I have a disability, I cannot drive, I cannot travel by taxi, so I have to hire a driver and my salary does not cover this.”

When asked if the shutdown was permanent, public relations officer Thabo Modise referred Daily Maverick to the North West Department of Health’s Tebogo Lekgethwane, who responded, “Though the evacuation takes place while there are already plans for decommissioning the hospital… no official date of the permanent closure has been communicated.”

In March 2021 Health MEC Sambatha was in talks with labour unions, traditional leadership representatives and politicians about the risk the closure of the hospital posed to staff and the community.

Built in 1968, the hospital came under the spotlight because of the poor state it was in, but despite the deteriorating conditions, the hospital served as a lifeline for nearby communities.

Johannes Mdluli, a 68-year-old pensioner, lives 2km from Thusong District Hospital. He suffered a stroke seven years ago and as a result cannot talk, is wheelchair-bound and is unable to take a taxi to go for treatment or collect his medication. He hires a private car at a cost of R300. With the shutdown of the hospital, this price is set to increase, which he and his wife cannot afford.

Diabetic and double amputee James Moeng, a former truck driver, said: “I don’t have money. I get money from the government. My kids are in school, I need to buy groceries and electricity and pay off my credit. That R1,800 is in sy moer in [gone].

“With the hospital closed, how will I get treatment? It was better when it was open. What about people in wheelchairs and those who cannot walk?”

The hospital provided health services to communities who could not afford to travel to General De La Rey Hospital in Lichtenburg to access health services.

“If there is no health facility within a 5km radius as per the national norms then the district will have to make a provision for a mobile clinic,” said Lekgethwane. He indicated that Itsoseng Community Health Centre would be expanded into a district hospital.

Another pensioner, 71-year-old Sipho Ntuli, asked, “How are the mobile clinics going to operate here? Some roads are unreachable, especially when it rains. What do we do now? They only know corruption, they are experts in corruption.”

“Close the hospital and you are killing your people. Some people sleep on an empty stomach. Where will they get money to go to another hospital?” asked a healthcare worker. DM