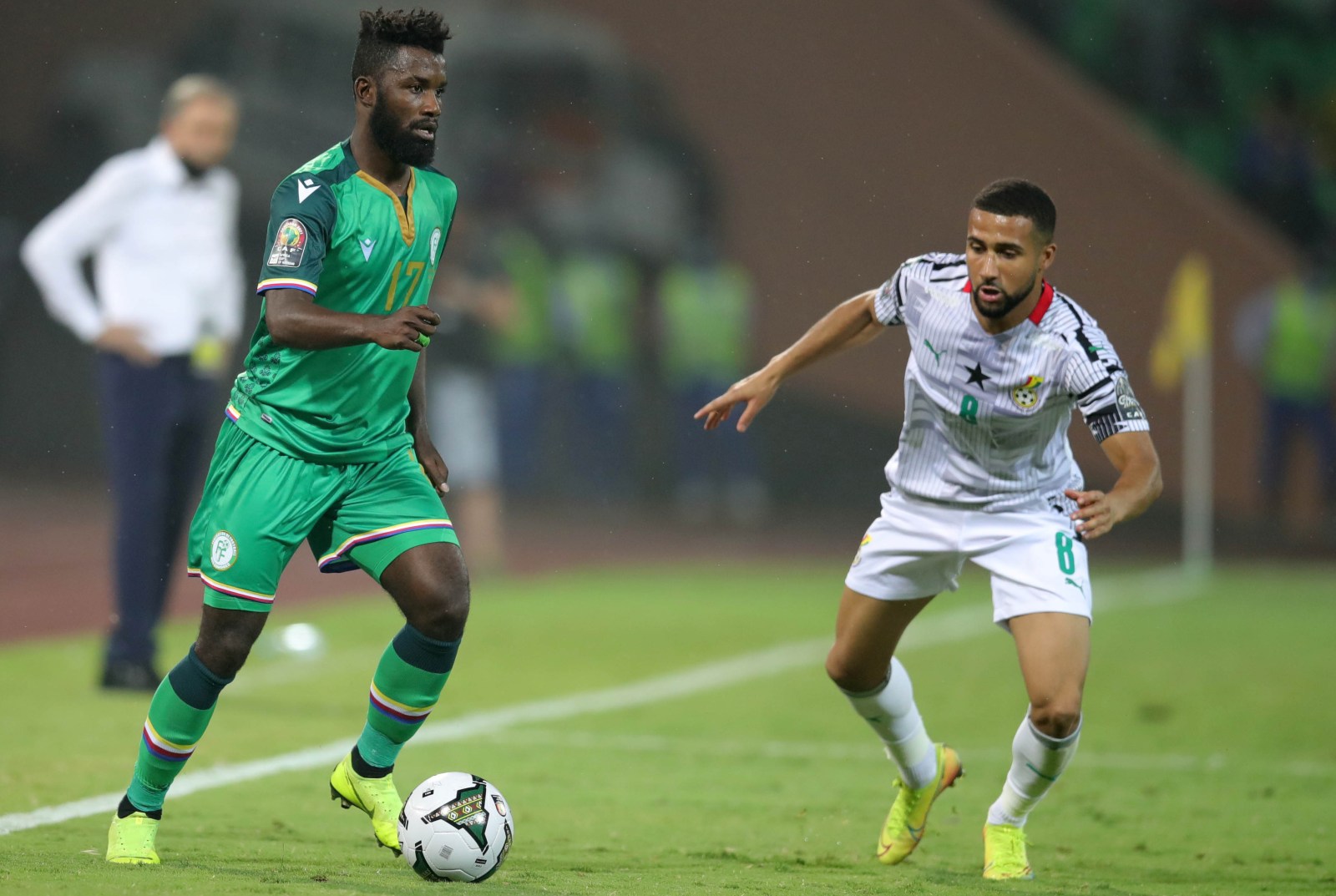 Nakibou Aboubakari of Comoros challenged by Daniel Kofi Kyereh of Ghana during the 2021 Africa Cup of Nations match between Ghana and Comoros at Roumde Adjia Stadium in Garoua, Cameroon, on 18 January 2022. (Photo: Samuel Shivambu/BackpagePix)

Disappointed as they might be after being knocked out of the Africa Cup Nations, Ghana have bigger fish to fry, according to coach Milovan Rajevac.

The ongoing 33rd edition of the Africa Cup of Nations (Afcon) claimed its first big-name casualty after four-time champions Ghana were bundled out of the group stage following a 3-2 loss to tournament debutants Comoros.

Goals from captain El-Fardou Mohamed and Ahmed Mogni saw the newcomers take control of the game and were cruising when the 10-man Black Stars, who had captain Andre Ayew sent off in the first half, mounted a comeback.

Richmond Yiadom and defender Alexander Djiku scored the key goals for the desperate African giants. However, the Comoros weren’t done and had one more surprise for their much-more illustrious opponents.

Despite the loss, which saw Ghana finish dead last in Group C, their Serbian head coach defiantly told journalists after the game that he would be staying put and would not resign from his post.

“I came to Ghana to qualify the team for the World Cup. That is my primary target. I will stay and lead the team in the March play-offs,” said Milovan Rajevac.

“I believe we have a team that can become stronger and get to the World Cup. I took this job with the aim of taking Ghana to the World Cup… This competition did not go well but it is a learning process for us.”

His counterpart Amir Abdou, on the other hand, was elated by the tenacity and gall shown by the Afcon rookies who were not given a sniff at earning any points from their group before the tournament began.

The Coelacanths now have three points, moving from fourth position to third, just behind Gabon who are second with five points after their two-all draw versus group winners Morocco. Abdou’s charges will have to wait for the results of the other groups to see if they can advance as one of the best third-placed finishers.

“We did not back down even after Ghana equalised. We always believed we could achieve a famous victory for our nation,” said the Comoros coach.

“I sent on attacking players in the belief that we could score a third goal and my decision paid off. Now we must wait to see if we are among the best four third-placed teams and play in the second round. We are satisfied with the way we played. We had a plan and stuck to it. We learnt from the mistakes we made in previous games.”

Pre-tournament favourites Senegal are through to the round of 16, as group winners, despite only managing to score a single goal in the pool phase. They ended it with a 0-0 draw against Malawi.

The Lions of Teranga were frustrated by the determined and stubborn Malawians, who knew that a defeat would likely compromise their chances of qualifying for the next round, while a win would have ensured that they finished at the summit of their group. This after second-placed Guinea fell to a surprise 2-1 defeat at the hands of the already eliminated Zimbabwe.

The Senegalese are ranked first in Africa, but have yet to live up to the expectations that come with such a tag.

Their only goal of the tournament to date was a Sadio Mane penalty in their opening game of the showpiece, against Zimbabwe. They followed it up with a dull draw against Guinea.

“We have lacked efficiency at the front but we want to ensure we have a different strategy going into the next round of matches as we hope for more goals,” said Senegal coach Aliou Cisse.

Guinea, despite their defeat to Zimbabwe, managed to hold onto second place — level on four points with third-placed Malawi, but with a superior head-to-head after beating the Malawians 1-0 in their opening game.

As for Malawi, similarly to Comoros, they will have to wait for all the group games to conclude to see whether they can squeeze into the last 16 as one of the best losers. DM