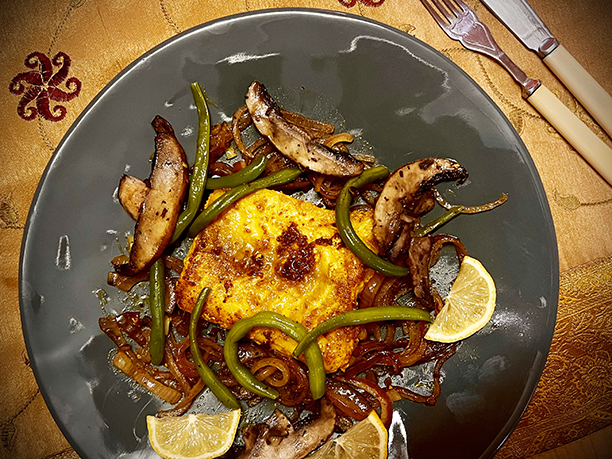 Ground turmeric lends both flavour and colour to kingklip. Equal quantities of the golden spice and dried crushed garlic with a hint of white pepper did the trick.

Fiddling with flavour when cooking fish, especially a white fish such as kingklip, is fraught with the risk of overwhelming its natural charms. But kingklip can take a bit of spice. Once the fish was cooked, fried until just less than done, I felt it needed something more, so sliced a red onion and fried it in the same pan, to take on the spices that had permeated the fish.

Kingklip fillets, as needed, cut from the thick end

Melt the butter and stir in the turmeric, garlic and white pepper.

Fry the kingklip fillets in the turmeric butter until slightly underdone. Salt the fish lightly. Transfer to warm plates.

Fry sliced red onion in the turmeric butter after cooking the fish.

Earlier, blanch green beans in boiling water and run them under cold water. Drain. Before serving, toss them in the pan in which you cooked the fish and the onions. I also cooked sliced brown mushrooms in olive oil with a splash of lemon juice, salt and black pepper. Squeeze a bit of lemon juice over if you like. DM/TGIFood