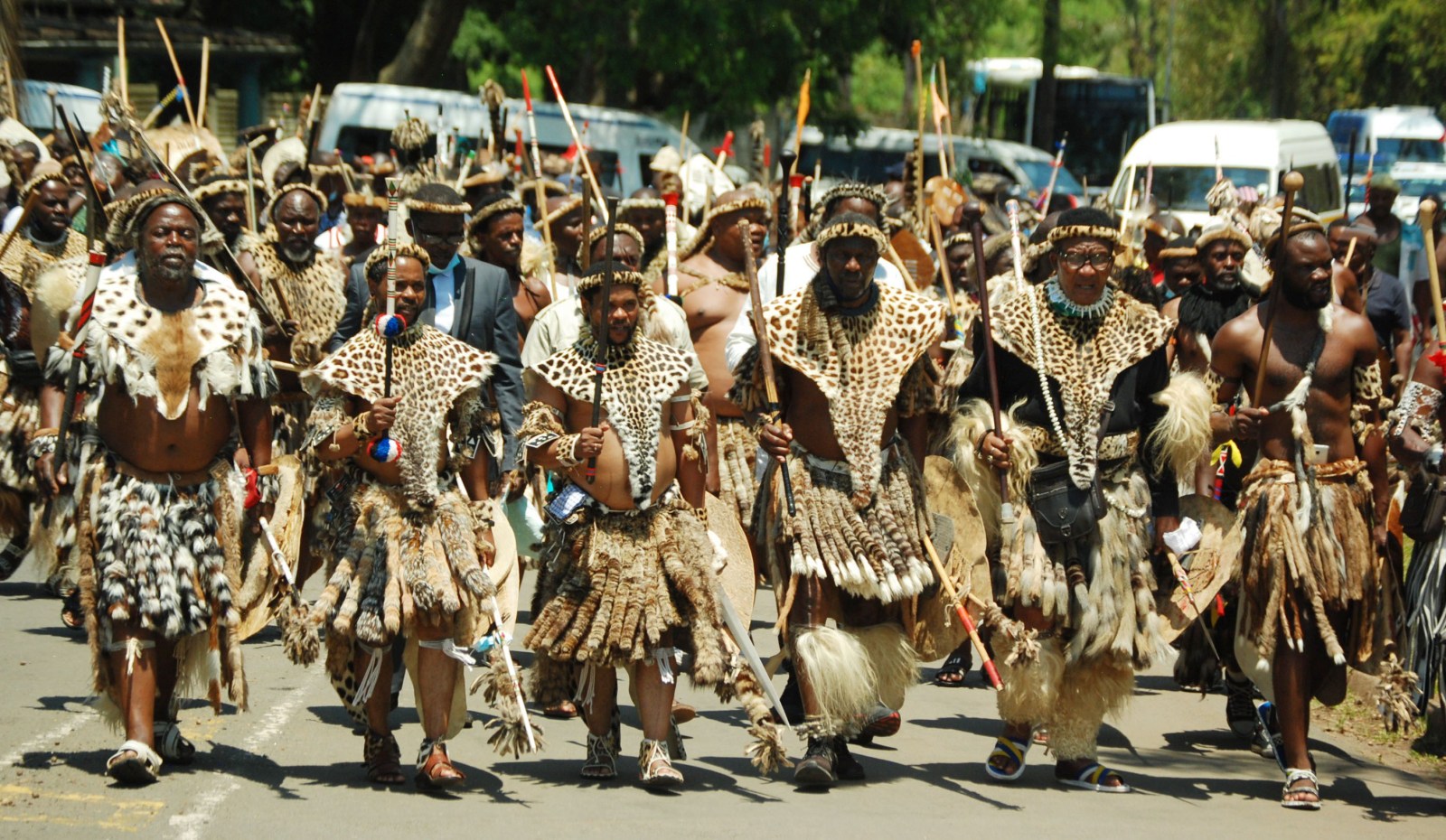 Zulu warriors march on the streets of Pietermaritzburg to show their support for King Misuzulu kaZwelithini Zulu during the succession court case on 11 January 2022. (Photo: Phumlani Thabethe)

There was drama inside and outside the Pietermaritzburg High Court on Tuesday before, during and after the hearing of the dispute between the warring factions of the Zulu royal family.

Various disputes between the Zulu royal family members were set to be heard on Tuesday and Wednesday. These disputes include the succession to the throne following the death of King Goodwill Zwelithini kaBhekuzulu in March 2021.

The late king’s first wife, Sibongile Winifred Zulu, is seeking a declaratory order stating she married the late king in terms of civil law and in community of property, which entitles her to 50% of kaBhekuzulu’s estate. The other five wives were married in terms of customary law, and thus have no standing, she contends.

Queen Sibongile Winifred’s two daughters, princesses Ntandoyenkosi Zulu and Ntombizosuthu Zulu-Duma, wanted the court to declare the late king’s will to be a forged document. In that will, the late king nominated his third wife, the late Mantfombi Dlamini Zulu, as the regent. Queen Dlamini Zulu, in turn, wrote her own will in which she nominated her own son, Misuzulu Sinqobile kaZwelithini, as the successor to the late Zulu king.

The applicants have also interdicted any attempts to install Misuzulu as the next king until the court has dealt and decided on all the substantive issues.

There was a long delay to the start of the case as lawyers for the applicant wanted the presiding judge, Isaac Madondo, to recuse himself, because they contended that he is conflicted because he had presided over the marriage ceremony of Goodwill Zwelithini and his last wife, Zola Mafu, in July 2014.

“The matter is to be rolled over to tomorrow [Wednesday] to decide whether it is appropriate that I recuse myself because I have once presided over one of his marriages,” said the judge.

While there was a delay inside the court chambers, hundreds of amabutho (Zulu warriors) and Zulu maidens – who were there in support of the elevation of Misuzulu as the next Zulu king, sang war songs outside the court, blaming the government and the applicants for interfering in the Zulu succession processes.

Zulu princes, princesses, amakhosi (chiefs) and other royal courtiers, in full Zulu regalia, were inside and outside the court.

Nigel Redman SC, representing Sibongile Winifred, led the offensive, saying that his client – who was married to Goodwill Zwelithini in September 1969 under civil law and within community of property – sought to declare the king’s five other marriages null and void because someone who is married under civil law is precluded from legally marrying other spouses.

Judge Madondo ruled that he cannot declare the late king’s five other marriages invalid because the applicants had not clearly stated their case.

On Wednesday, the court will hear the application by the princesses for the court to determine whether or not Goodwill Zwelithini’s will was forged.

Mpumelelo Zikalala, a constitutional law expert and commentator based in Durban, said courts had ruled in favour of the validity of customary marriages in many recent cases and that it “will be very difficult” for the princesses “to convince the court that the late Zulu king was totally incapacitated when he wrote and signed the will”.

It is not the first time that a succession battle has raged ahead of the coronation of a new Zulu king. King Shaka, recognised as the founding father of the Zulu nation, is said to have fought hard and rough to emerge as the king. He was eventually assassinated by his brothers Mpande and Dingane in September 1828.

Goodwill Zwelithini himself had to go into hiding for three years following death threats.

As the succession court case rages inside the court, the battle for supremacy and the right to succession rages outside it. Last Saturday, Prince Simakade Zulu, the firstborn son of the Goodwill Zwelithini, prepared to marry his bride by sending gifts to the Nkosi family in Mtubatuba in a ceremony called umkhehlo and umembeso.

Many Zulu royal watchers believe that this ceremony is to prepare himself to formally take his place as the official contender for the Zulu throne against the favourite, Misuzulu, who himself recently married two women to stand a good chance to be elevated as the new Zulu king. It has become customary for the Zulu king to wed before ascending to the throne. DM