Gauteng’s unplaced pupils will be in class by end of January, promises Lesufi 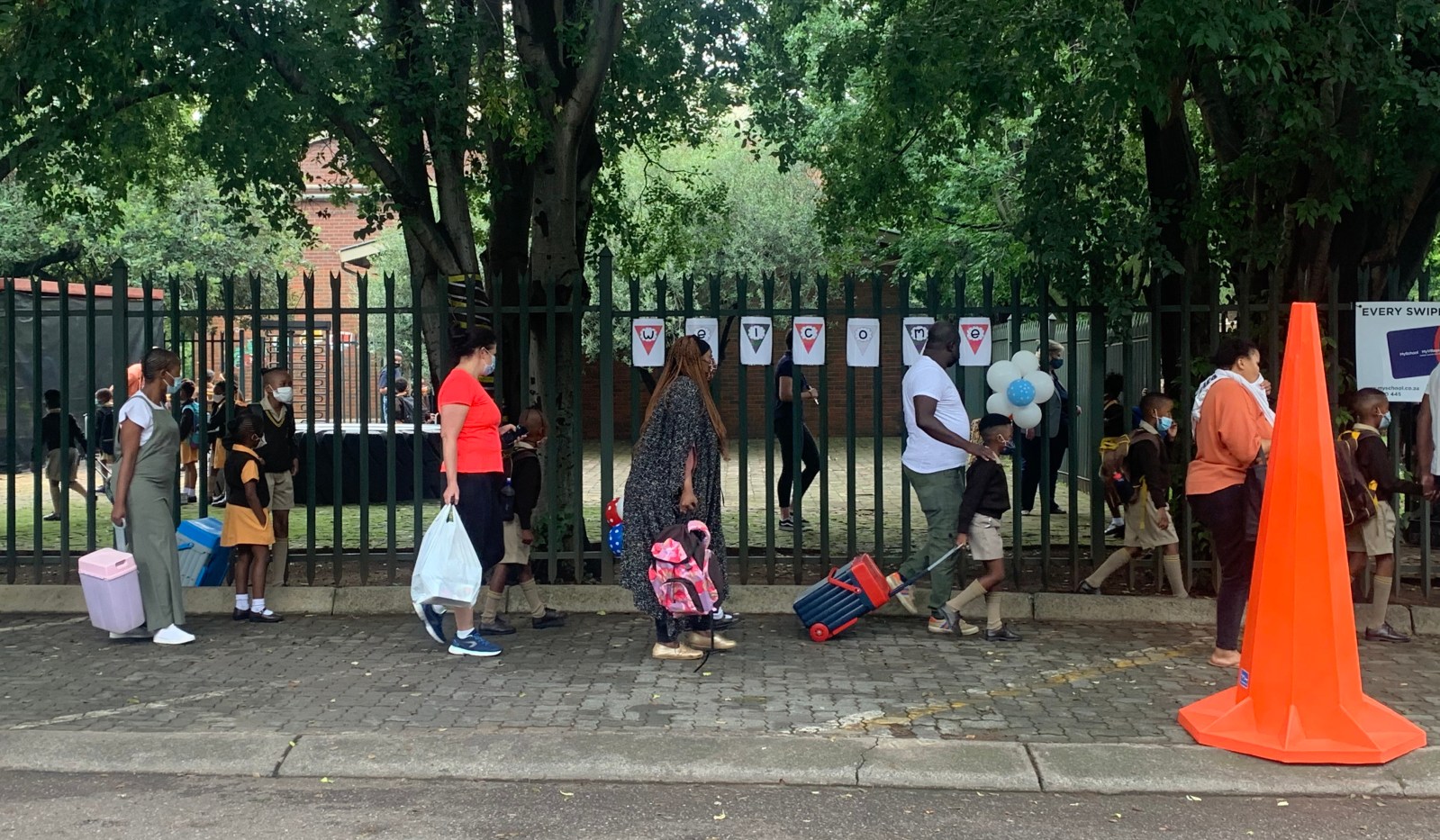 Mahlape Makalaza said that she was nervous about her son starting Grade 1 but had confidence that the school had the necessary health and safety protocols in place. (Photo: Kagisho Mafolo)

Hundreds of pupils in Gauteng are still unplaced, but education MEC Panyaza Lesufi made a ‘firm commitment’ that they will be before the end of this month.

On Wednesday, schools in the inland provinces – Gauteng, Free State, Mpumalanga, Limpopo and North West – reopened for the school year.

Previously, schools across the country reopened on the same day, but consultations with parents changed this as parents said they preferred different return dates, Basic Education Minister Angie Motshekga said at a press briefing on Tuesday.

The coastal provinces will return to school next week, on Wednesday, 19 January.

On an overcast Wednesday morning, Irene Primary School was bustling as parents took pictures of their children and waited in line with them to get screened and sanitised before they headed off to class.

Outside the school gates, Kholofelo, who did not give her last name, said her daughter starting Grade 1 was “exciting and nerve-wracking”.

“But I’m also eager for her to get settled into school and meet her classmates. Besides that, I’m confident in the school’s ability to adhere to Covid-19 protocols, this is a good school,” she said.

It was just before 8am and Kholofelo was uncertain whether the school would continue rotational learning this year. “I’m hoping that they’re back to full-time schooling because I’m also back at the office full-time and I won’t be able to navigate having her at home all day and being at the office.”

Another Grade 1 parent, Mahlape Mhlakaza, said she was nervous about her child starting school, “but he doesn’t seem to be anxious about going to school”.

Mhlakaza said Irene Primary School had a “good reputation” and she trusted the measures they had in place to keep the children safe.

Speaking to Daily Maverick, Samantha Jaynarayan, Irene Primary’s principal, said all the children would be back at school every day.

“We’re back to school every day and we’re prepared. We have dividers on their desks, they have their masks on, they have staggered breaks and we’re excited to have them back,” said Jaynarayan.

Irene Primary is a public school that has about 1,000 children and some classes have as many as 40, she said.

There were 135 children starting Grade 1 on Wednesday.

Speaking to pupils, teachers and a handful of parents inside the school hall, Panyaza acknowledged that there were still hundreds of unplaced pupils in Gauteng. “On behalf of the department, I don’t want to only apologise but I want to reassure parents that last year during this particular period almost 35,000 learners were unplaced. Fortunately this year we are now left with less than 700 learners that still need to be placed.”

In 20212, the 35,000 unplaced pupils were only placed in schools by the end of March, but this time Panyaza made a “firm commitment” that the 700 unplaced children would be in their respective schools before the end of January.

“It is not lack of planning or lack of schools that we did not place the 700 children. We have a phenomenon that we call choice and that is something beyond our control. Hundreds and hundreds of learners come to Gauteng to learn,” explained Panyaza.

Setlabotjha Primary School will have 1,200 pupils, and implement rotational learning.

For the past two years schools have used rotational learning in an effort to minimise the spread of Covid-19. In 2021, the Basic Education Department estimated that pupils lost between 50% and 75% of a normal year’s learning in 2020.

Speaking on the impact of rotational learning, Makhura said: “We can’t go into a full year in 2022 with rotational learning. We now know how to manage Covid-19. If we don’t get to normality and bring back all the learners to school there will be great consequences to bear.

“The 2022 academic year should be different because the education sector has had serious difficulties as a result of the outbreak of the pandemic. The impact of disrupted learning and teaching is devastating to our learners in terms of their development. It can’t continue like this, that is why we have to make sure 2022 is a better year.” DM