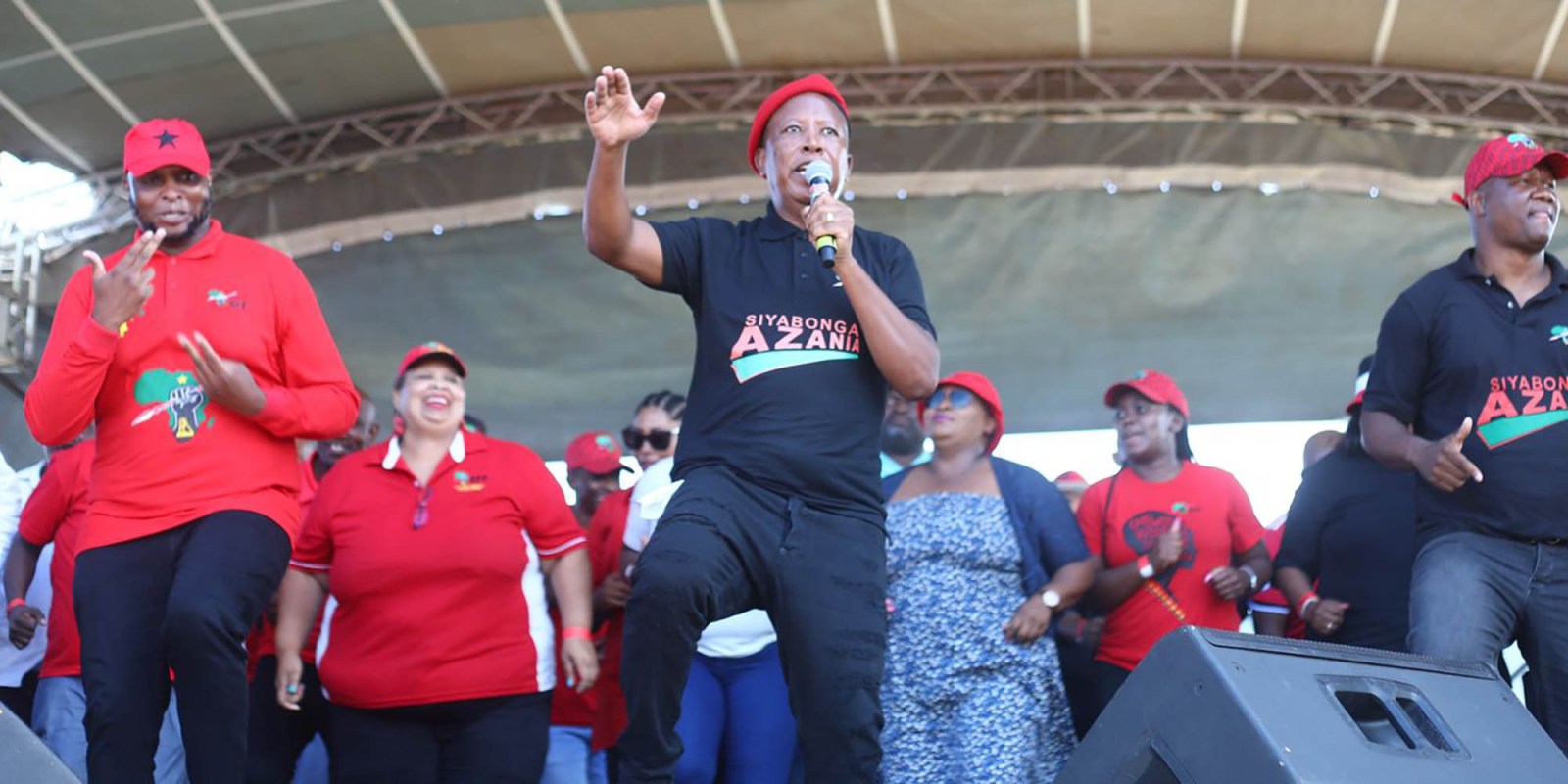 The Economic Freedom Fighters and its leader Julius Malema are eyeing KwaZulu-Natal as a growth point to amass support in the run-up to the 2024 national elections.

Economic Freedom Fighters (EFF) leader Julius Malema has ambitions of his party playing the role of the kingmaker in KwaZulu-Natal politics and eventually taking over the running of the province.

Malema told thousands of supporters attending the EFF’s Siyabonga (Thank You) Rally in Durban on Saturday, 8 January that his party was determined to grow its support base in the province before the 2024 national elections.

“We will not retreat. Nothing can stop us. The future looks bright, the poor are going to be liberated. Let’s go and take the victory of the EFF in 2024,” Malema told the crowd.

Political pundits say that the EFF had a successful 2021 local government election in KwaZulu-Natal — it now has representation in almost all municipalities in the province.

Political analyst Wayne Sussman said it made perfect sense for the EFF to focus its attention on KZN.

“This is one of the areas where the EFF had major growth in the 2019 general elections and the 2021 local government elections. So KZN has become very kind to the EFF. It is a place with a lot of voters, a place that has a lot of importance to the ANC and it is a place that they [the EFF] believe that they will be able to grow and that is why they chose to host a rally that coincided with the ANC January 8 statement,” Sussman said.

Before the 2021 local government poll, the EFF had 59 councillors in KZN. After the 1 November poll, it had 150 councillors. The EFF now has two deputy mayors, in uMhlathuze Municipality and Zululand District Municipality.

In the coveted eThekwini Municipality, the EFF tripled its representatives from eight councillors in 2016 to 24 in 2021. This is significant growth, from a mere 4% to just above 10%, making it one of the key players in the municipality.

In the Msunduzi Local Municipality, the provincial capital of Pietermaritzburg, the EFF grew its three seats to an impressive 10. It also made giant strides in the ANC heartland of southern KwaZulu-Natal, winning crucial seats in places such as the uMdoni (Scottburgh) and Ray Nkonyeni (Port Shepstone) municipalities.

EFF leaders and other mandarins were upbeat, even cocky, as they descended on Durban over the past week, hosting a number of events that culminated with South Africa’s third-largest political party holding the Siyabonga Rally in People’s Park, attended by thousands of supporters where neither party leaders nor supporters wore masks in clear defiance of the country’s Covid-19 regulations.

On Friday, the party descended on Inanda, a mix of formal and informal settlements north of Durban, where it slaughtered four cows in a show of “pride of the African tradition” and thanked the footsoldiers, known as ground forces, for going out of their way to persuade KZN voters to cast their ballot for the EFF.

In a statement, the party said: “The continued faith the people of KZN place in the economic emancipation movement is overwhelming. The four cows which will be slaughtered, [is] to thank the people of KwaZulu-Natal for their confidence in the EFF.”

Inanda was a calculated choice. The last time the EFF gathered a large crowd in Inanda was during its campaign for the 2021 local government elections. These efforts seem to have paid off as the EFF snatched Inanda’s Ward 108 from the ANC in the 1 November poll.

On Saturday, both the SAPS and eThekwini Metro Police maintained a strong presence as buses carrying EFF supporters began arriving at the People’s Park. The vast majority of these were enthusiastic young people, singing Struggle and EFF songs.

There were several older people in the crowd. Among them was 58-year-old Hlengiwe Dlamini from Folweni, south of Durban. She was travelling with her five-year-old grandson, Qinisi, who, she said, had been a “fighter” since he was three years old. Dlamini said she decided to throw her lot in with the EFF after “the ANC has been using us for too long”.

“These people [the ANC] are greedy. They steal everything. They say something, and they do the exact opposite. They don’t have the truth. At least this boy [Malema] has the truth. He does what he says. This country will only come right when he takes over, this country will return to blacks only when the EFF is in charge,” she said.

Young people like Elihle Mafunda (21) of Glebelands Hostel, south of Durban, said they were attracted to the EFF because they want “change”.

“We are unemployed and the government is promising us this and that, but nothing is coming to us. We want jobs, we want houses, we want economic opportunities and we think the EFF is the only way,” she said.

Inside the People’s Park venue, EFF’s “paratroopers”, known as “Defenders of the Revolution”, who wore military garb, ensured that order prevailed and those attending the rally did not go out of line during the daylong event.

Entertainers and the singing of EFF songs kept the crowd entertained in the sweltering summer heat.

“We want EFF councillors who are going to disrupt the council. When they say ‘why’, you will say the Inanda people want sanitation, water and electricity, including houses.”

He directed party councillors throughout the country to inspect municipal projects and report back to the party. He said he wanted his party’s councillors to put pressure on the mayor and municipal manager to deliver services to communities.

He slammed Cyril Ramaphosa, saying that the president was using the Covid-19 regulations and restrictions to cling to power and prevent his unpopularity from being exposed.

He called on Ramaphosa to lift Covid-19 regulations so that people could attend rallies, watch soccer and other sporting activities and open economic activities.

Malema said his party’s mission was to ensure that the ANC was driven from power in the 2024 elections.

Malema and other EFF leaders have previously consistently said they want South African borders to be open to all African people so they could travel freely and live wherever they liked without a passport. But in a change of tack, Malema slammed white employers in the hospitality and other sectors for employing more immigrants than locals. He said party leaders should visit these companies to ask how many South Africans were employed there. He said this should not be used to harass and attack foreign nationals because “they didn’t hire themselves”.

Sussman said this was a significant shift from Malema’s previous comments, and the EFF may have been triggered by the sentiments of many South Africans on the employment of immigrants.

“If you look at the 2021 local government elections, big winners were parties like ActionSA and Patriotic Alliance, which ran on the campaign of strong borders, deporting of illegal immigrants and deporting criminals, etc. I think that this messaging is related to the South African sentiment and it is not surprising for the EFF to tap into these sentiments,” he said. DM