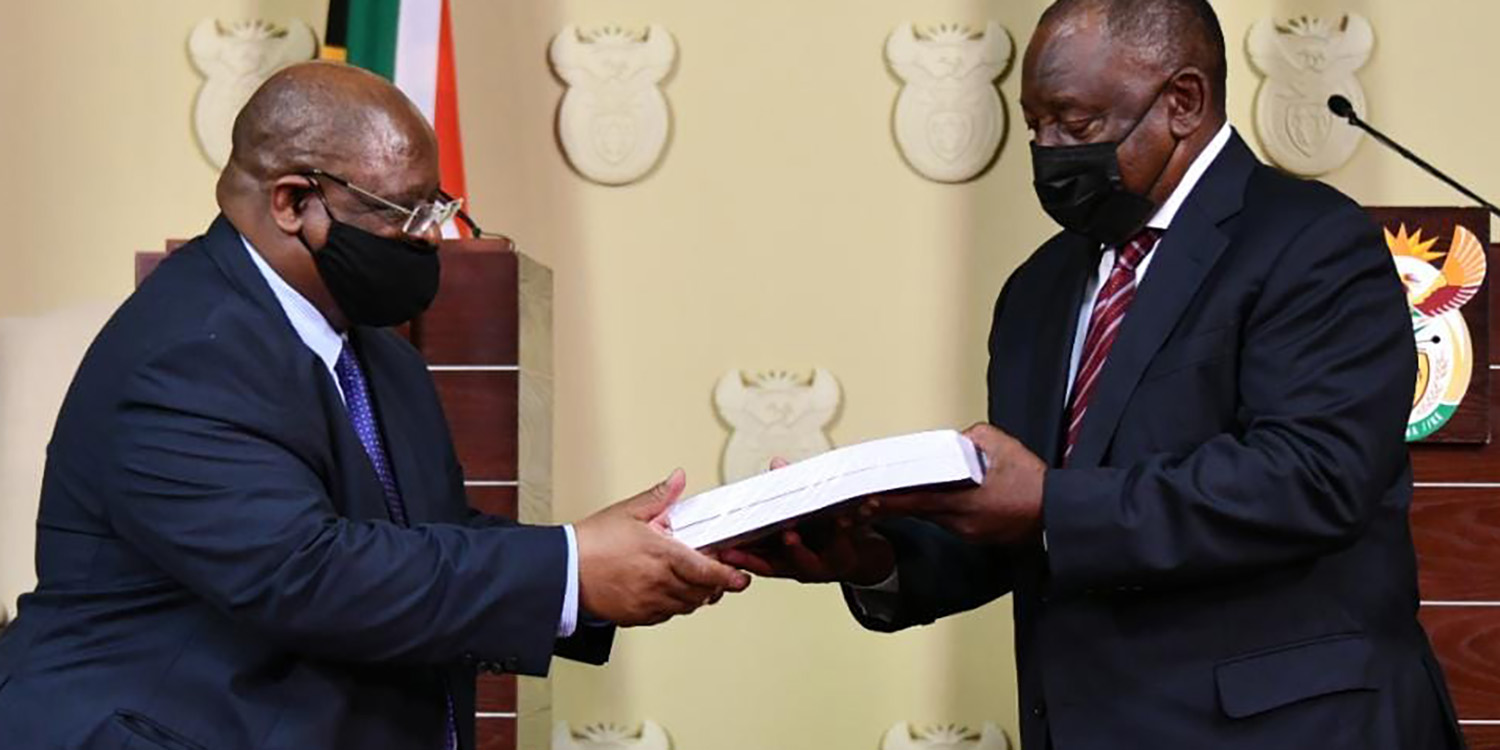 It will take a year more for comprehensive action on the report. President Cyril Ramaphosa will present his recommendations to Parliament in June.

Almost four years to the day since the Commission of Inquiry into State Capture started, chairperson Judge Raymond Zondo handed the first of three reports to President Cyril Ramaphosa on January 4.

The first volume targets the Gupta family’s New Age newspaper, the destruction of SAA by former president Jacob Zuma’s consigliere, Dudu Myeni, the capture of the SA Revenue Service (SARS) and the corruption of the state procurement system through the tender system.

The first part of the report is divided into three volumes. The first volume blows the lid off corruption at SAA, SA Express and SAA Technical. Myeni was chairperson of SAA and she ran riot, the commission heard, trying to re-engineer the leasing of aircraft, catering, procurement as well as the airline’s treasury.

The second volume is likely to be most closely read as it will make the first substantive findings into the Gupta family, who owned the New Age newspaper. The New Age newspaper was used as the first battering ram to secure advertising and sponsorship rents from the state-owned Government Communication and Information System (GCIS). This was detailed by whistle-blower and former director-general Themba Maseko.

The third volume of the report deals with the SA Revenue Service (SARS), where whistle-blower Athol Williams revealed how the consulting company Bain had peddled its access to Zuma to extract massive fees from SARS. Williams has fled the country in fear for his life.

This volume will also make recommendations on how to reform the R500-billion procurement (tender) system which the commission has found to be the key leverage point of State Capture.

The second part of the commission’s report comes out at the end of January and will deal with Eskom, Transnet and Denel, where the grand corruption occurred. The third part of the final report will come out at the end of February and will cover the rest of the entities studied by the commission. It will also make recommendations on other topics like parliamentary accountability and the failure of the criminal justice system and of intelligence to detect State Capture in its early incarnations.

“This is a defining moment in the country’s efforts to end the era of State Capture in our country, and to restore the credibility and capability of our government,” said Ramaphosa at the handover ceremony. He said the commission had taken long to finish its work but he thanked Zondo for an “extraordinary [job]” which he had undertaken with “dedication, determination and patience”.

The government will only develop a comprehensive view of the report once Part Three is handed over at the end of February, said Ramaphosa.  He will prepare a set of recommendations to be tabled at Parliament by the end of June. This means it will take at least a year for comprehensive action on all the Zondo Commission’s recommendations. Ramaphosa said that prosecutions and other reforms, which have started, would continue.  The National Prosecuting Authority has started several cases which have come out of the State Capture Inquiry.

“We have to ensure that the findings of this commission not only mark a decisive break, but that these recommendations provide the foundation for greater transparency, ethical conduct within all state institutions and across society as a whole,” said Ramaphosa.

Each part of the report will be released to the public as Zondo hands it over and will be available on the presidency website (www.presidency.gov.za).