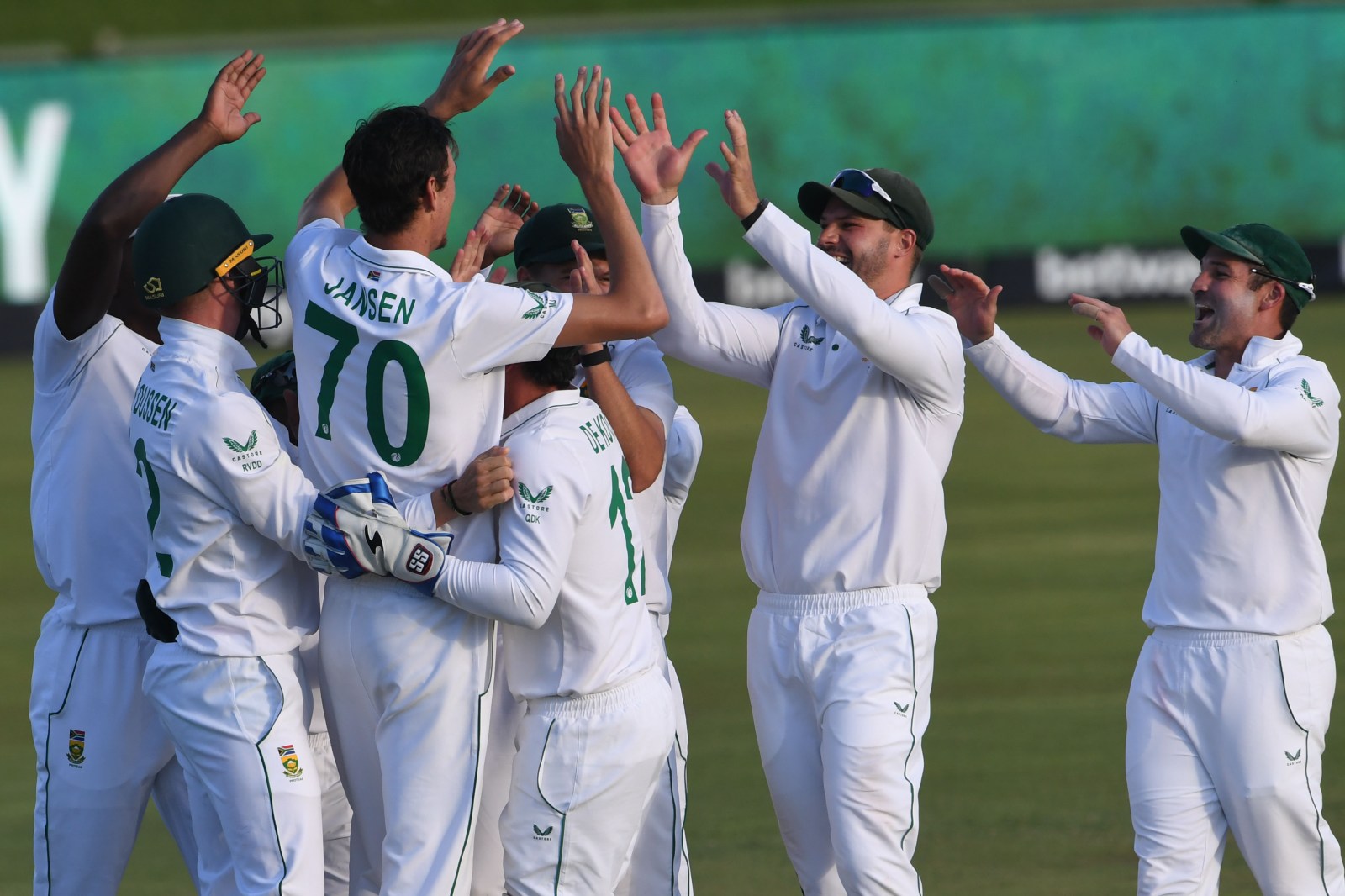 Marco Jansen of the Proteas celebrates the wicket of Mayank Agarwal of India during Day 3 of the first Betway WTC Test match between South Africa and India at SuperSport Park on 28 December 2021 in Centurion, South Africa. (Photo: Lee Warren / Gallo Images)

After a washed-out day two, due to torrential rain in Centurion, play started on Tuesday with South Africa desperate to get back into the game.

Staring down the barrel as the Indians started the day on 273 for three, the Proteas ripped through India’s batting lineup, taking the remaining seven wickets in only 15.3 overs and conceding only 55 runs in the process, in the morning session.

Ngidi, continuing his love affair with Centurion, which yielded a six-wicket haul on Test debut three years ago, was again to his liking. The big right-arm quick ended with figures of six for 71 to ensure that his team stayed in the contest – just.

Debutant Marco Jansen picked up his first Test match wicket when he made Jasprit Bumrah play at a short, wide delivery and provide catching practice for Wiaan Mulder at third slip, the final wicket of India’s first innings.

India dismissed on 327, just two runs shy of the first innings par score at SuperSport Park, giving the Proteas a glimpse of hope at salvaging something from the Test.

The Indian batters struggled to cope with the extra bounce offered by the day three SuperSport Park pitch. Rabada, Ngidi and Jansen all stand over 1.90m tall, which suited the conditions to a tee.

The Proteas top order also struggled to cope with conditions. Dean Elgar’s feet were caught on the crease as played in front of his body to a snorter of a delivery by Bumrah in the first over of the Proteas innings, edging behind to wicket keeper Rishabh Pant, dismissed for one run.

Aiden Markram, Keegan Pietersen and Rassie van der Dussen did not last long as the batters were dismissed for 13, 15 and three, respectively, all to superb deliveries from the Mohammeds – Shami and Siraj. South Africa were left languishing at 32-4 after 12.5 overs.

Quinton de Kock and Temba Bavuma, as they have done many times before, had to rebuild South Africa’s innings with a fighting partnership. The pair put on 72 for the fifth wicket, taking the Proteas to 104.

Shardul Thakur eventually made the breakthrough after De Kock attempted to run the ball down to a vacant third man but only succeeded in dragging the ball on to his stumps, dismissed for 34.

Bumrah went down after twisting his right ankle after following through on a delivery in his sixth over. The Indian talisman did not complete his over and went off for a check-up.

Bavuma brought up his 16th Test match fifty with a pull shot off the bowling of Shami. He was dismissed the very next ball prodding at a ball just outside off stump with Pant taking a regulation catch.

A rearguard partnership by Rabada and Jansen halted the Indian’s ambitions of running through the Proteas’ tail. The pair put on 37 for the eighth wicket.

Jansen eventually fell for 19 before Rabada was dismissed shortly after by Shami. It was the right-arm seamer’s 200th Test wicket as well as his fifth wicket in the innings and his sixth five wicket haul and third against South Africa.

Bumrah came back on to the field after an extended period on the sidelines as he was looked after by his team doctor. He returned to take the final Proteas wicket. Keshav Maharaj dismissed, slashing at a wider deliver and caught at deep third man by Ajinkya Rahane.

India had 30 minutes to see off the Proteas new ball attack before the end of play. The opening pair of Mayank Agarwal and first innings centurion, KL Rahul, were assured in seeing off new ball bowlers Rabada and Ngidi. Jansen then struck on the first ball of the final over of the day, dismissing Agarwal for four runs.

Nightwatchman Shardul Thakur strode to the crease and successfully saw off the final five deliveries of the day.

India leads South Africa by 146 runs heading into day four with good weather expected in Centurion tomorrow. The Proteas will need to start day four in a similar fashion they started day three, with accurate fast bowling and quick wickets.

If South Africa have any chance of obtaining a positive result in the match, they will need their batters to come to the fore against an Indian team that may be without Bumrah, whose ankle injury remains worrying for the tourists. DM