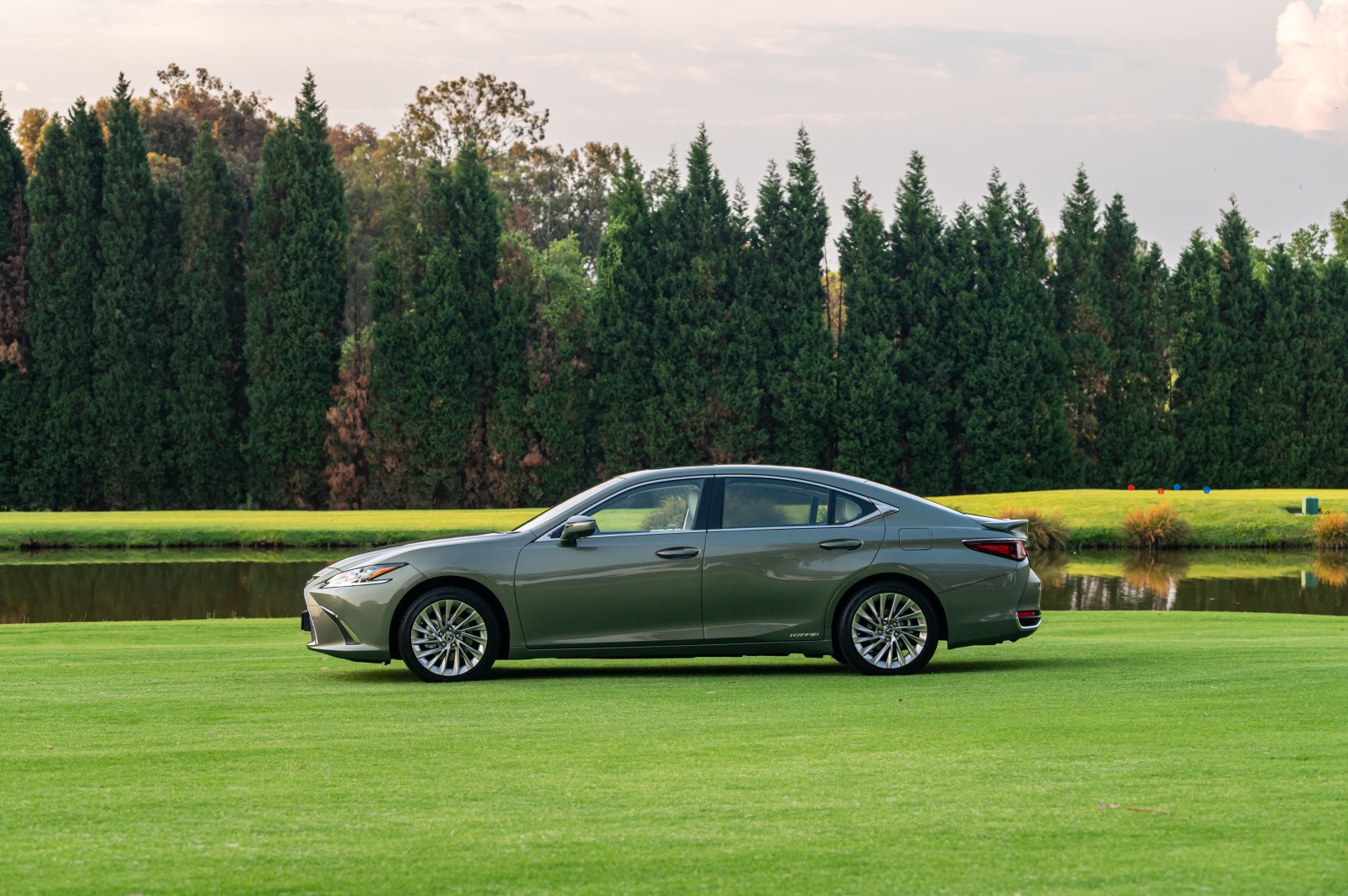 While South Africa lags behind in the race towards a carbon-reduced future, the new hybrid Lexus ES 300h poses a seriously good alternative in the New Energy Vehicle segment.

Last month gave cause to celebrate for Lexus’ parent company, Toyota. Not only did it top the local sales charts by selling 11,892 vehicles in the passenger and commercial vehicle segments, but it was the first time since October 2019 that the local arm of the Japanese manufacturer broke the 11,000 unit barrier.

The recently launched Toyota Cross dominated the passenger car segment with 1,757 units sold, followed by the hatch Starlet (1,477) and el cheapo Agya (911), while on the LCV front, the Hilux continued to dominate with a massive 2,558 units sold.

Looking at these impressive figures, it’s almost bizarre that Lexus, the luxury arm of Toyota, only managed to shift 46 units off showroom floors in the same month.

While I have been a huge fan of the brand since it relaunched in South Africa in 2006, I have often found it disturbing that South Africans haven’t embraced the spindle emblem brand like the European, UK, Chinese and North American markets have, where it has sold in excess of 2.3 million units since its global debut in 1989.

To get a bit deeper into number perspectives: while its parent company Toyota has dominated and remained the top-selling manufacturer for decades in South Africa, over the last three years, Lexus sales have barely breached the 2,000 unit mark. Let me remind you that the Toyota Hilux bakkie regularly sells between 2,500-3,000 units a month!

In 2019, 978 Lexuses sold locally. In 2020, a year hit hard by the Covid-19 pandemic, just 601 units sold – and by November last month, in a year severely compromised by both lockdown issues and semiconductor chip shortages – only 550 units sold, year-to-date.

You may, like me, be wondering why South Africans have not embraced the unique Japanese brand in the luxury sedan segment, which remains heavily dominated by the Germans. My simple conclusion is that most South Africans don’t give a toss about reducing carbon emissions.

One thing’s for sure: Lexus’ lacklustre local sales have absolutely nothing to do with quality of product. I was recently reminded of just how good the brand is at the launch of the updated ES sedan.

The ES, which stands for “Executive Sedan”, was first introduced in 1989 to tie in with the Lexus brand’s global launch of its debut offering, the flagship LS 400.

Strategically, the ES was launched to appeal to customers who couldn’t afford the LS but who were keen to get their hands on some Japanese finely crafted luxury. While there have been seven generations of the ES to date, the first five were built on the trusty Toyota Camry platform. In the US, the ES soon garnered a nickname: “the Country Club Camry”.

The newly updated seventh generation ES that I test drove on launch is available in a straight petrol and petrol hybrid, both with a 2.5-litre petrol engine, offering 160kW and 243Nm. The range comes in two trim grades – the EX and SE.

Placed between the IS and luxurious LS, the ES draws guns with the likes of the Merc E class, BMW 5-series, Jaguar XF, Volvo S60, Audi A6 and the Alfa Guilia in the premium sedan segment. They’re all beautiful cars, but with its sleek exterior and aggressive spindle grille, in my books the Lexus ES might just be the best-looking of them all, bar perhaps the Guilia.

However, in terms of the exterior update, you’ll have to have an eagle eye to immediately spot the changes from its predecessor. The main change is the grille which has been revised with fewer vertical slats, giving it a more “pinched” visage. On the top trim SE, the headlamps have slimmed down and now brandish what looks like a Nike tick.

Where the ES stands apart from its competitors is in the quality of interior finishes. While it’s definitely not the fastest or most powerful in its class, a number of its competitors forgo the kind of  authentic, attention-to-detail finishes in the cabin that put the ES in a superior league. It’s literally swathed in premium leathers on the seats, the dashboard and the centre console, and the fine quality wood is hard to miss, embedded in the steering wheel. The Mark Levison surround sound system is top notch.

Tech-wise, I was relieved to see that the ES no longer relies on that irksome touchpad to control the car’s systems and infotainment system by introducing a much more user-friendly updated touchscreen.

The ES is generous to rear seat passengers in terms of space, as well as allowing them access to a rear control unit to adjust climate settings, heat up or cool down their leather seats and even operate the rear screen’s sun-blind.

On my test drive through Franschhoek and surrounds, while the ES driving experience cannot be classified as adrenaline-inducing, I relished the quietness of the cabin and the sensation of floating while driving – even on some pretty uneven surfaces. The steering and brakes are razor-sharp, and with its brand-new chassis, body control is impressive.

The CVT gearbox, not my favourite when it comes to transmissions, is one of the better ones I’ve experienced, although there is still a slight lag in response when acceleration kicks in. I reiterate – this is no boy racer, and perhaps therein lies another answer to my earlier question – why the Lexus brand has been unable to lure the local speedy BMW lovers to go Japanese.

My pick of the pair was the petrol hybrid, the 300h SE, underpinned by Lexus’s 4th generation hybrid technology which allows for spectacular efficiency of just 4.6l/100kms, while the straight petrol inches closer to a respectable 7l/100km.

Whether we like it or not, hybrid and battery electric technology is the future. As the rest of the world races towards a drastically reduced carbon footprint by 2030, South Africa lags embarrassingly behind.

Earlier this week, the president of Toyota Motor Corporation, Akio Toyoda, held an international press conference where he announced the Japanese manufacturer’s plans to roll out 30 battery electric models by 2030. The Lexus brand is at the heart of this strategy, whereby BEVs (battery electric vehicles) will account for 100% of Lexus’ total sales in Europe, North America and China by 2030.

“Lexus has pursued unique styling and a unique driving signature, and, as a pioneer in hybrid electric technology, it has refined its electrification technology,” said Toyoda. “And now Lexus is embarking on a new chapter… we believe that the Battery EV will become the future symbol of Lexus as a model that most clearly expresses the evolution of the automobile brought about by electrification.”

Toyota SA, who are no fools when it comes to strategy, have clearly been playing the long game locally with their luxury brand, and while sales numbers on paper may look paltry, in terms of the New Energy Vehicle segment in SA, Lexus rules this roost, as niche as it may be.

In the not-so-distant future, where the deadline for a zero carbon emissions industry grows ever closer – vehicles like the ES 300h will surely rule the road.

The Lexus ES comes standard with a 7-year/105,000km warranty and full maintenance plan. Service intervals are every 15,000km or annually. DM