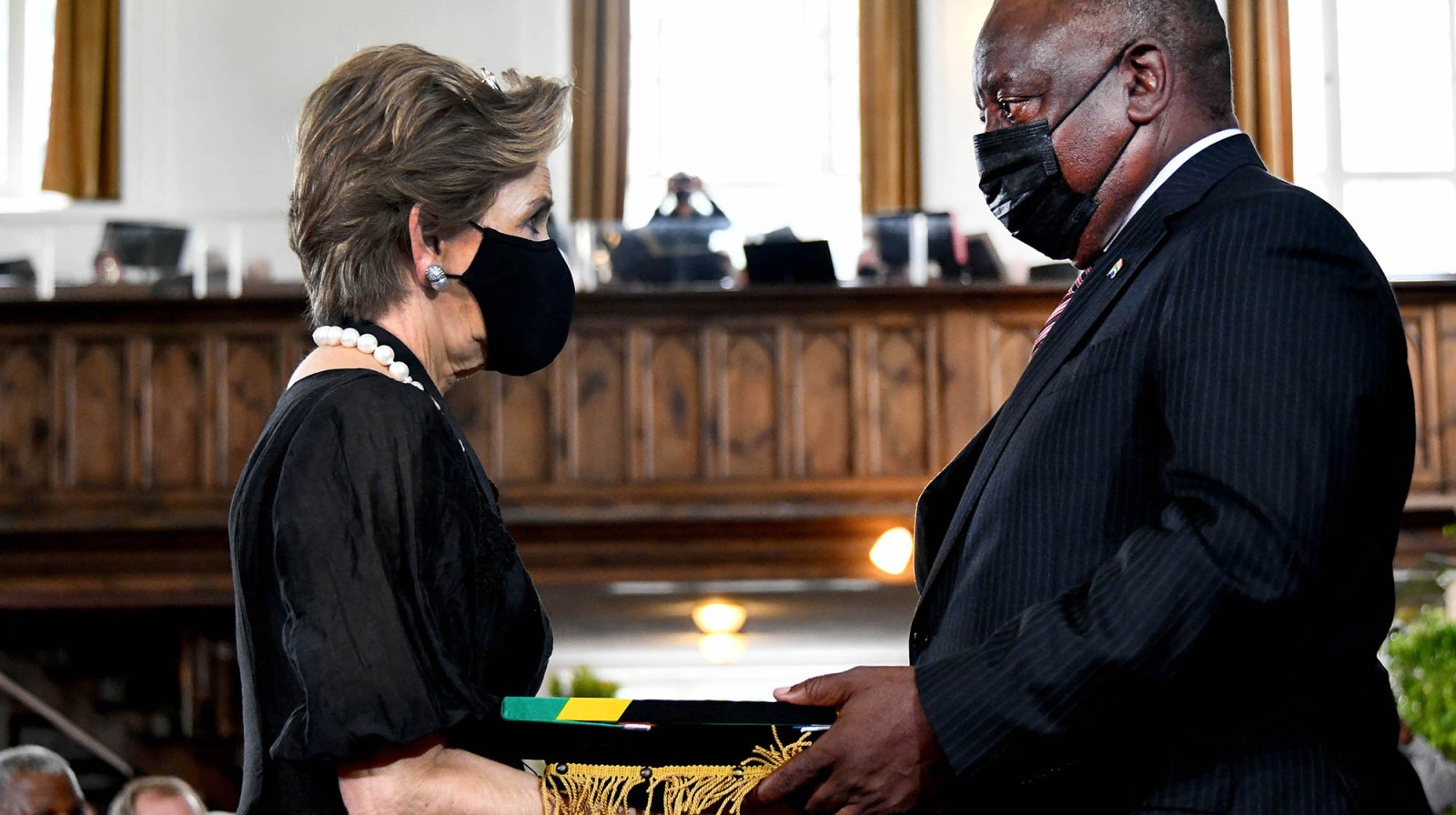 President Cyril Ramaphosa (right) and the widow of the late FW de Klerk, Elita de Klerk at the Groote Kerk in Cape Town on Sunday 12 December 2021 for the state memorial service of the late former deputy president. De Klerk died in November at his home in Cape Town, after a long battle with cancer and was buried in a private ceremony at an undisclosed location last month. (Photo: GCIS)

At a state memorial service in Cape Town, FW de Klerk was honoured as a former deputy president who helped craft the Constitution.

It was as a former deputy president, from 1994 to 1996, of South Africa’s democratic dispensation that FW de Klerk was remembered at a state memorial service at the Groote Kerk in Cape Town on Sunday morning.

The keynote speaker, President Cyril Ramaphosa, made it clear, without saying so, that the honour of a state memorial service was not due to De Klerk having been the last apartheid president.

Ramaphosa’s address, focusing on De Klerk’s contribution to the development of South Africa’s Constitution and democracy, was an example of statesmanship and honourable diplomacy, stressing, as it did, the need for forgiveness and unity.

But the fact of De Klerk being the last apartheid president lay behind the rest of Ramaphosa’s sentence: “We recognise that his contribution and his legacy remain contested.”

This contestation was illustrated by the protest outside the Groote Kerk before the service began. Demonstrators from the Imam Haron Foundation sang and held placards calling for justice for apartheid’s victims, a reminder that De Klerk’s submissions to the Truth and Reconciliation Commission (TRC) denied responsibility for human rights violations and that he stormed out of the TRC before launching a legal challenge to findings that he did not give a full account of what he knew of the Khotso House bombing of 1988.

The demonstrators were removed by law enforcement, but no arrests were reported.

However, the Archbishop of Cape Town, Thabo Makgoba, who was one of the church leaders who ministered to De Klerk during the last months of his life as he suffered from mesothelioma — a rare form of cancer — said it was clear that De Klerk had accepted apartheid was a crime against humanity. Makgoba said De Klerk did not, even at the end, believe apartheid was a form of genocide, but, “more important to me as a person of faith, he was unequivocal in describing apartheid as a sin”.

De Klerk, who died at the age of 85 on 11 November and was buried in a private ceremony, has been labelled a pragmatist who realised the apartheid state was not sustainable, rather than a visionary motivated by the injustices of apartheid as he pushed the oppressive National Party along the road of negotiation and reconciliation.

FW de Klerk Foundation chair Dave Stewart, in his memorial address, did not challenge this assertion, but credited De Klerk for the “boldness with which he initiated constitutional transformation”, and “the skill and perseverance in managing the process”.

Stewart said some commentators believed socioeconomic circumstances determined history, while others held that individuals determined its course, but perhaps it was a combination of these factors.

“All ages are subject to the ebb and flow of socioeconomic tides, but destiny is sometimes determined by exceptional leaders who know how to navigate these tides, who sometimes catch the breaking wave of history.”

De Klerk was such a leader, he said, and Nelson Mandela was “undoubtedly another”, placing the two men who were jointly awarded the Nobel Peace Prize in 1993 once more beside each other.

He said most leaders would have been more cautious when facing great transformation, but De Klerk removed all obstacles to negotiations in his speech of 2 February 1990 when he unbanned the ANC and other liberation organisations and announced the imminent release of Mandela.

And, “unlike many”, he stayed the course and saw the process through to its logical conclusion, scrapping decades worth of apartheid laws and being present at the signing of South Africa’s democratic Constitution in 1996.

Stewart said none of us can determine the nature of the world we are born into or the injustices of the past. “We can only wrestle with the political forces of our time and leave the world a freer, more just and better place than we found it.”

De Klerk’s humanity was then brought to the fore by his widow, Elita, whose presence among the arrangements of white roses, white proteas, and yellowwood saplings was a reminder of the tragedy in De Klerk’s personal life: the scandal of an affair, the subsequent Valentine’s Day announcement in 1996 of his divorce from his first wife, Marike, and her death at the hands of a murderer in her Cape Town beach apartment five years later.

Elita, who received applause as she stood from her chair next to Ramaphosa and approached the lectern, said De Klerk was a man “about to embark on an Odyssean trip” when she met him in June 1989. At that time he was head of the National Party and a few months away from being president following PW Botha suffering a stroke. It took eight years before their relationship could be made public — after the journey to a new Constitution had been completed.

Her Greek accent and mention of the fact they were both married when they fell in love with each other brought emotion into the imposing Calvinistic atmosphere of the Dutch Reformed Church. Elita spoke of De Klerk the man, rather than De Klerk the politician.

He struggled with the tension between intellect and emotion, she said, having been born into and shaped by the puritanical Huguenot-Afrikaner way of thinking.

She spoke of his recurring nightmare of falling toward Earth from an aeroplane, and she believed it was Mother Earth, the animus and realm of feeling, calling to him. She had to help him discover emotion was not a betrayal of the intellect, but a recognition of justice.

He was an unlikely, but “committed parent to a new country”, she said, with her voice cracking slightly as she said her love for him would “keep him by my side”.

De Klerk’s son, Jan, made no mention of his father’s divorce or of his mother’s death and thanked Elita for loving his father. “He loved you completely, thank you for loving him.”

He spoke of how his father taught him that his interactions with people should be based on humility and respect, and approached with “the attitude of earning something and expecting nothing”.

He made mention of the forces within which his father had to operate, his being born into “Afrikanerskap”, yet managing to resist the desire to maintain the status quo at all costs.

In a nod to his father’s detractors, he opened his address with a quote from Friedrich Nietzsche. “We praise or find fault depending on which of the two provide more opportunity for our powers of judgment to shine.” DM