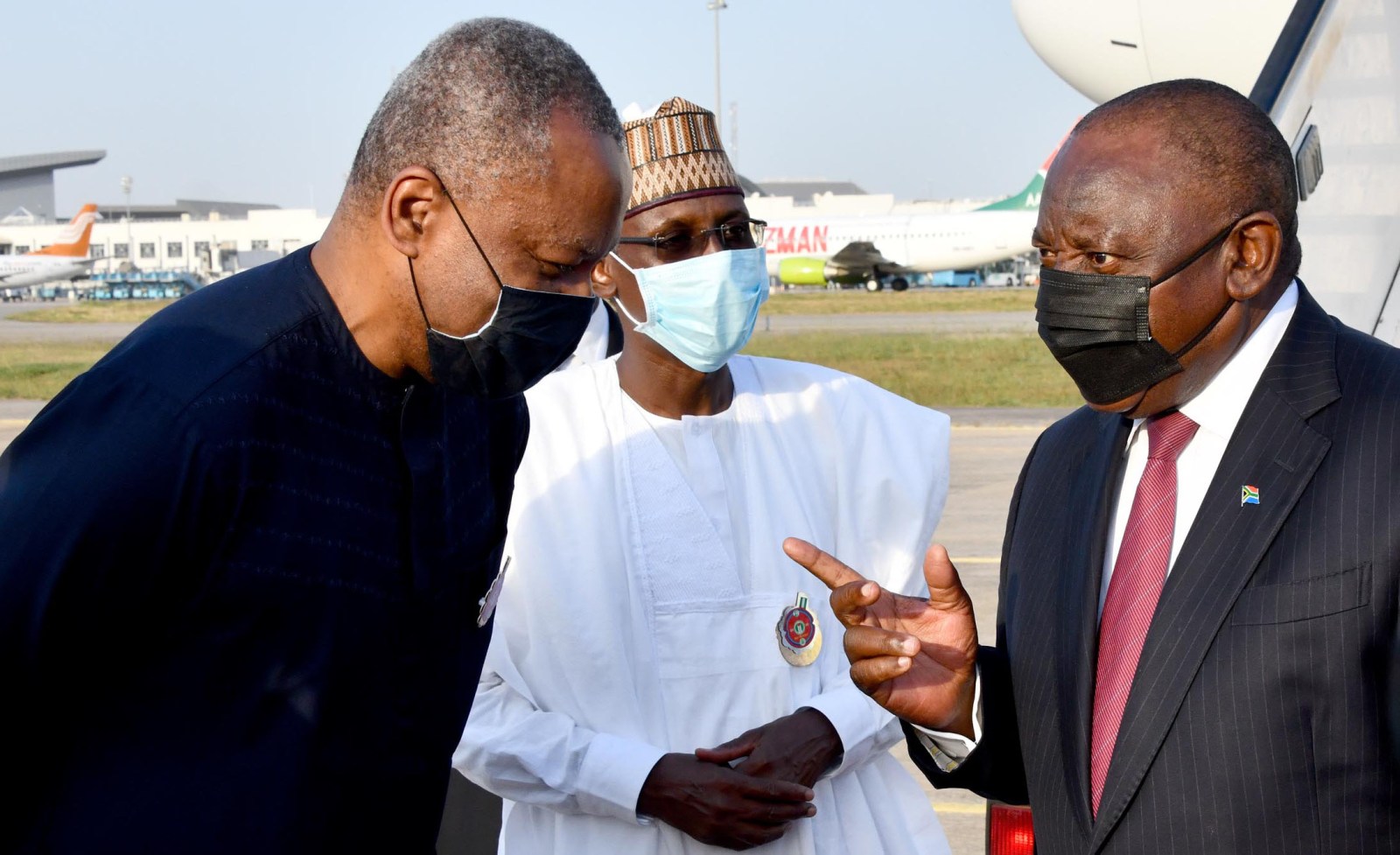 Omicron travel bans opened a window to smooth over some past frictions between South Africa and Nigeria, the latter’s foreign minister tells Daily Maverick. Geoffrey Onyeama says solidarity over the bans boosted ties, although the South African delegation was still not happy to call the x-factor by its name.

President Cyril Ramaphosa’s decision to go ahead with a tour to four African countries in a week, taking off just as Covid-19 infections with the Omicron variant back home was rising, was a gamble.

The bet has paid off in Nigeria, where foreign minister Geoffrey Onyeama told Daily Maverick in an interview on the sidelines of the Dakar Peace and Security Forum on Monday that the two countries managed to smooth over some political issues that have caused friction in the past.

The relationship was “really strengthened” as a result of the solidarity shown by Nigeria towards South Africa on the Omicron travel bans by a number of Western and other countries, Onyeama said. “In the background you always had this whole xenophobic thing, and the visa things behind that, but I think this has really brought the two sides really close again. From the Nigerian side, [we said] ‘listen, you can come into our country, this is your home, whatever anybody says about you, you are kith and kin as it were, so you’re welcome, irrespective. We’re not going to put the boot in with everybody else.’ We felt good about that.

“On your (South African) side you really felt appreciative that these are real brothers and sisters kind of thing. So I think really now we can say a lot of the baggage really is history,” he said, swiftly adding with a laugh: “For now.”

Relations between South Africa and Nigeria have been volatile at times, with hostilities sparked easily by issues such as, in the past, obtaining visas and yellow fever certificates, and violent attacks on Nigerians by South Africans.

Travel bans slapped on southern Africa helped open up an opportunity for renewing diplomatic relations between the two countries, as Ramaphosa has gone on the attack against Western countries closing their borders to South African travellers.

The bans followed an announcement by the South Africa government at the end of last month that it had sequenced a new and particularly infectious variant of the Covid-19 virus, which seemed to be able to evade vaccines.

“There was the whole solidarity thing about allowing the trip to go on, notwithstanding all the hullabaloo in the media,” Onyeama said, revealing that there had been hostility in the Nigerian media and “certain parts of government” ahead of the South Africans’ visit on Tuesday and Wednesday last week.

Nigerian President Muhammadu Buhari had gone against that and “was quite effusive, expressing solidarity with South Africa in a very practical way”.

The medical team in Nigeria also suggested that they had the capacity to deal with any individual cases that might require isolation, and there was also a daily Covid-testing service on hand, he said.

At least two members of Ramaphosa’s forward security team from the military and an undisclosed number from the police had to go into isolation after testing positive.

News24 reported that a South African Air Force Falcon 50 VIP jet was sent to them from South Africa for a medical evacuation a couple of days after the touring delegation had departed Abuja.

There were suggestions that the patients had complained about the conditions under which they were kept in isolation, as well as about the food, but Defence Minister Thandi Modise said they would be more comfortable back home where they could also receive “emotional support”.

Although discussions were good, the South African delegation was apparently still not happy to call the x-factor by its name.

For him it’s not about apportioning blame but to “have access to law enforcement and to provide timely information for when intervention might be needed”.

Onyeama said not much work was done on joint efforts to combat xenophobia in the past two years, because of the Covid-19 lockdown, but he added that there appeared to have been fewer attacks on Nigerians at the same time.

Where Nigerians living in South Africa had been involved in criminal activities, or were in the country illegally, the law should run its course. “We don’t defend the criminality of Nigerians for one second.”

Asked whether any plans were afoot to drop visa restrictions for travel between the countries, Onyeama said it wasn’t in the pipeline because of Nigeria’s large population and economic situation there that might push people to leave.

Onyeama also called the UK’s red-listing of Nigeria on Monday an “overreaction”. It came after 21 travellers from there tested positive for Omicron in recent days, out of a total of 134 Omicron cases. This is second only to South Africa, with the UK’s minister for Africa Vicky Ford informing Onyeama by phone on Monday afternoon that this was an indication to the UK that there already was community spread of the variant in Nigeria. Onyeama said it was news to him.

Meanwhile, a number of African leaders supported Ramaphosa during speeches at the opening session of the Dakar Forum when he had strong words for the “travel apartheid” against South Africa after last month’s Omicron announcement, and for vaccine hoarding by rich countries.

He said there should be partnerships, but that while European Council president Charles Michel was in favour of this, “quite often we find there is a lot of paternalism that underpins the relationship” between African and European countries.

Whereas many of these countries called just to say they’ve banned flights from South Africa, without asking what South Africa’s problems were, the leaders of the four West African countries Ramaphosa visited in the past week called to enquire whether he was still coming and to welcome him.

He also said an economic recovery from the pandemic shouldn’t leave anybody behind. He called for lower interest rates for African countries when borrowing money, and for better drawing rights. Both are currently unfavourable compared with Europe.

He also stressed “self-reliance” when it came to vaccine manufacture, which Senegal and South Africa had the capacity to do if the intellectual property rights to some of these were waived. “We don’t just want to fill and finish [vaccine doses],” he said, adding that colonial powers had “raped and pillaged” African countries and that they wanted to do things on their own terms.

Senegal’s President Macky Sall said South Africa has shown transparency and the travel ban was “not only discrimination, but it’s also counterproductive because it calls others not to make public their results. This, in fact, is the real danger.”

Ramaphosa is due to deliberate with Sall during his working visit on Tuesday before returning home later in the day. DM

Carien du Plessis is part of a group of nine media representatives from South Africa who are travelling with President Cyril Ramaphosa to report on his visit. See the previous article in a series here.