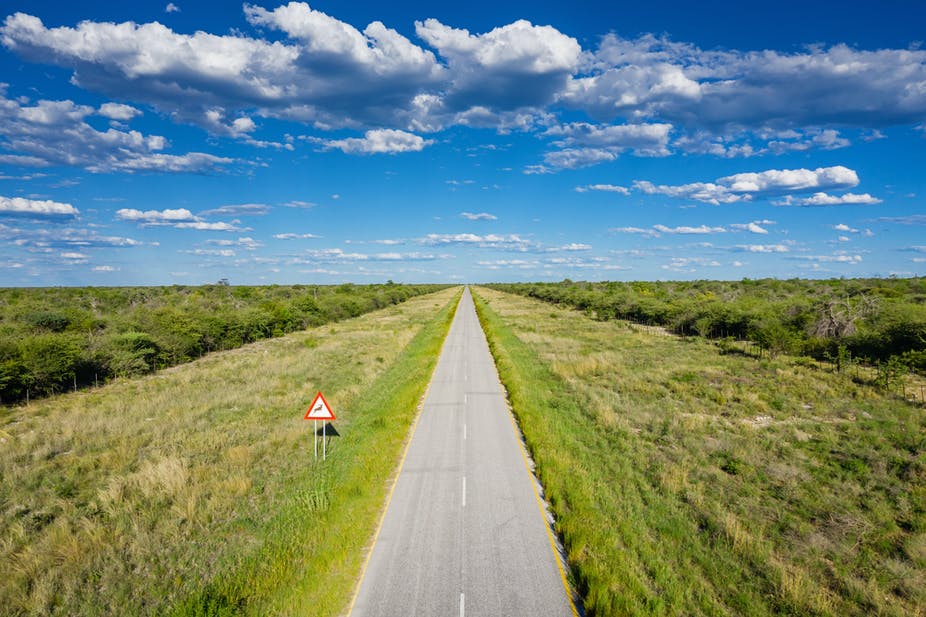 The mission to integrate African economies relies on the development and construction of major infrastructure, from roads to railways and ports across the continent. For instance, the 1,900km Nacala corridor aims to connect the landlocked regions of Zambia and Malawi, as well as the interior of Mozambique, to the Nacala port on the Indian Ocean.

Many researchers claim these large-scale road developments will have detrimental impacts on natural ecosystems. They are concerned about a reduction in habitat availability and connectivity. Roads can also lead to changes in land use, create illegal access into previously inaccessible areas, and result in conflict between people and wildlife.

Despite concern and speculation about the environmental impacts of future road development in Africa, there has up to now been very little systematic evaluation of evidence of these impacts.

We decided to fill this gap. In a systematic review of existing literature, we extracted and synthesised information on about 270 reported effects of roads on ecosystems. We also identified underlying mechanisms inside and outside protected areas in different sub-regions.

This helped us build a greater understanding of road impacts in sub-Saharan Africa, as well as the conditions under which future roads might pose a significant threat.

The impacts of roads

We found the reported effects of roads were usually related to land cover (change in type or degradation) and biodiversity (impacts on species composition or distribution).

Our findings suggest that the presence of roads, even inside protected areas, may pose a significant threat to species. The interactions between roads and species were not the same in all regions. Roads in and around protected areas had more negative impacts in central Africa than in southern Africa.

In many instances, roads were associated with a decrease in animal abundance. The main reasons were that roads were a barrier to the movement of animals, and they gave hunters and poachers access to previously unreachable habitats. Some road systems restricted the distribution range of animals.

But not all species responded in the same way. Some animals — like gorillas, bovids, carnivores and sometimes elephants — did not always avoid areas close to roads. Instead, they used roads as corridors for movement or even as foraging sites. In most published studies in our review, however, these mechanisms were usually speculated and required additional rigorous long-term studies for validation.

The review showed that roads, especially major ones, also had a strong influence on land use patterns. When roads created connections to previously inaccessible land, markets, cities and economic opportunities, they stimulated activities such as agriculture and logging. Roads also increased land degradation in many areas, often triggering erosion and soil loss.

Our review revealed that the road-effect zone was typically between 1km and 7km for larger mammals. Animals in these zones may be forced to restrict their movement and thus reduce their home range size.

Future road development will most likely promote landscape transformation processes as far as 10km away from roads. Secondary road effects (such as further road development), as seen in the Amazon, can extend far deeper into core natural habitats. Road development may promote local economic activities and transitions from farmland to built-up areas. Cropland expansion can be expected around major roads that provide access to markets. New roads may increase logging, causing substantial deforestation and a change of land use to large scale agriculture.

If not constructed and managed carefully, roads may lead to erosion, soil loss and flooding in many areas.

Addressing the impacts of roads

Where the potential impacts of future road development have not been considered and development has already started or completed, it may be late for conservation efforts in some areas, especially if formal protection status is not allocated fast enough.

Intervention at the design and construction phases of road development is critical for mitigating many of the effects we found in this study. Early phases should identify alternative routes to avoid areas of high ecological value. Given the size of the transportation network envisaged for the African continent, our study calls for a pan-African response.

There are some well-researched measures to be found in the Handbook for Road Ecology. Other complex effects (such as illegal hunting and harvesting or land-use changes) are often unintended consequences of roads and more difficult to address. They may depend on law enforcement and policy.

If the past is an indication of the future, new road development will have a strong influence on species distribution and land cover patterns in sub-Saharan Africa. Identifying how these impacts develop allows planners to better predict where and under what conditions roads might be a serious problem for different species and ecosystems more broadly. DM/OBP