Shelling out: It’s vital for government to focus on green energy now before its dependence on gas and coal makes fossils of us all 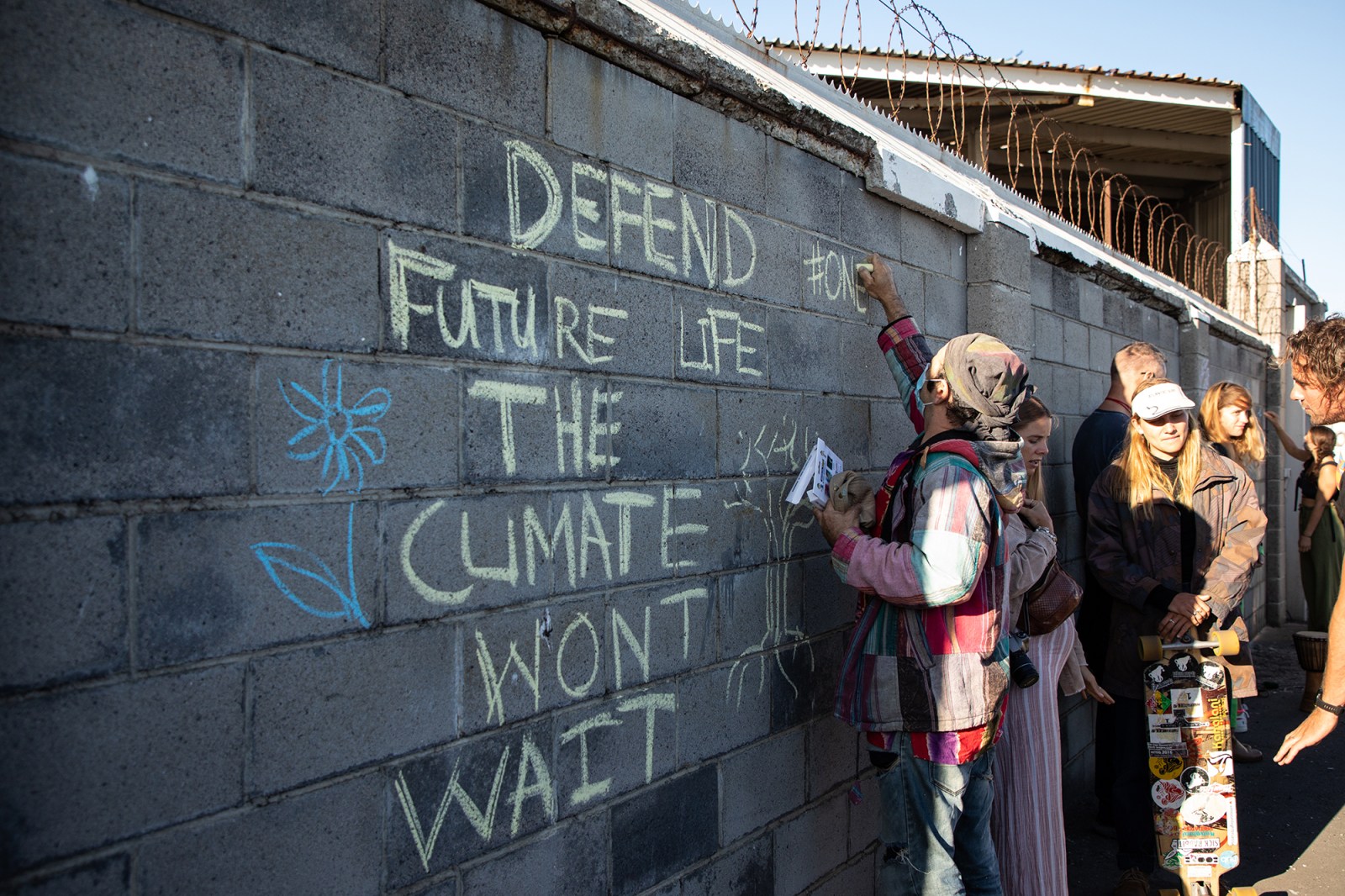 Protesters draw messages on the labour walls during a protest against Shell's offshore exploration plan off the Wild Coast at the Waterfront in Cape Town on Sunday, 21 November 2021. (Photo: Victoria O’Regan)

We implore you to act with urgency over another crisis that is confronting the well-being of our people and our planetary life support system — the Shell seismic exploration.

My warm greetings to you. We know you are faced with many issues and challenges, not only the new Covid crisis, but our financial position, our inequality and unemployment, our lack of effective governance, our energy crisis, but we implore you to act with urgency over another crisis that is confronting the well-being of our people and our planetary life support system.

I hope you have been informed of the nationwide concern over the Shell seismic exploration with over 380,000 signatures and protests being held nationwide on Sunday 5 December.

We ask you, as a matter of urgency, to instruct Minister Mantashe at the Department of Mineral Resources and Energy to withdraw the permit given to Shell. If he refuses, please replace him with a competent minister who understands the climate crisis and the world that is entering a new era of renewable energy. If you need Minister Mantashe in your Cabinet, please find another position for him. It is imperative that he can no longer be in a position to block progress. At present, he is a threat to the well-being of our people and our planet. This Shell exploration is just the last straw of highly irresponsible and ill-informed decisions.

We need a minister who understands the workings of the planet and the life it supports, and who listens to the many accomplished energy and environmental specialists in our country. They have well-informed answers. The latest disastrous decision of Minister Mantashe is his refusal to halt and cancel seismic explorations off South Africa’s coast.

These explorations are a threat to our planet and our people. We have to understand that our well-being is totally dependent on the well-being and health of the planet. I’m sure you know that. They also go against the recommendations of the International Energy Agency that the world has sufficient known fossil fuel resources for there to be no justification to undertake further exploration. In the light of all the evidence from COP26, it is irresponsible to seek more fossil fuel, when we should redouble our efforts — and our expenditure — on renewable energy.

If Shell objects and says they have a contract and will lose money, it is about time they acknowledged the profits they have made over the years, and the immense suffering they have inflicted on people and nature in the process.  Nigeria is a well-documented case.

I also ask you to move Minister Mantashe as I lay at his feet the present electricity crisis. He has over the years obstructed the rollout of renewable energy, while promoting fossil fuels. There is plenty of evidence that renewable energy provides more jobs than fossil fuel or nuclear, is less costly, and much safer and healthier. He must be aware of the health issues of coal and oil pollution.

Furthermore, his fossil fuel and nuclear pursuits are no solution to our immediate energy needs. The infrastructure for nuclear, coal, off-shore oil and gas, all take years to build and come online. The exception is his Karpowerships, which would lock us into expensive 20-year contracts. All his solutions keep us polluting and emitting carbon for years ahead, or become stranded assets.

I am so concerned as I know that if you opened the doors to renewable energy, we could overcome our immediate energy outages within months, not years.  Mr President, I thought our democracy was going to free us up for individual initiative, but our country is being throttled by regulations and controls.

Like many South Africans, I am deeply disturbed about the decisions and investments made by the ANC Government over the years, some before your time.

In 2010 more than 54 civil society organisations opposed the government’s application to the World Bank for the building of Medupi. The Southern African Faith Communities’ Environment Institute (SAFCEI) was among them. At the time we pleaded with Eskom for renewable energy. We were derided as being totally unrealistic. Had we spent the money that has been expended on Medupi and Kusile on renewable energy instead, we would now be self-sufficient.

While we can’t alter the past, it is not too late to change. Investors are queuing up to develop renewable energy in South Africa. But can they act? We have seen restrictions and controls, but it also seems they are up against vested interests in government. For Medupi the ANC investment arm, Chancellor House, invested in Hitachi boilers which turned out to be inadequate. Now we hear that the ANC has upped its shares in Shell, at the time of seismic and fracking surveys. We also hear that cabinet ministers or their families are heavily invested in coal shares. All this calls into question the integrity of the ANC Government.

Mr President, we believe you can take steps to restore confidence in the integrity of your government and promote the rollout of renewable energy. You can take the steps needed to call people to account, protect whistleblowers who report corruption and do what is right for South Africa and her people, and not just what benefits the ANC.

We assure you of our prayers.

Shelling out: It’s vital for government to focus on green energy now before its dependence on gas and coal makes fossils of us all