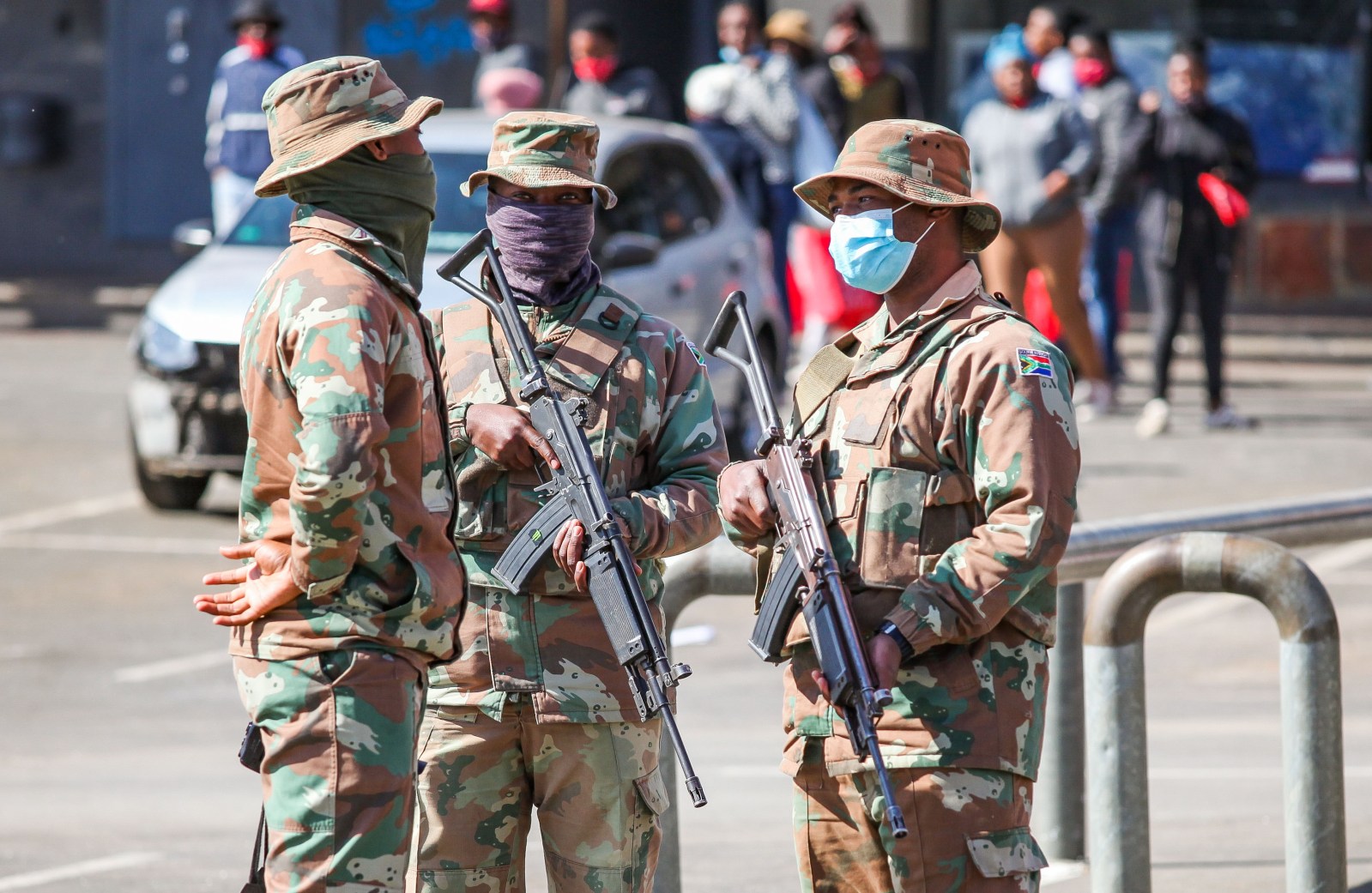 It remains to be seen whether the SANDF accepts civilian and health regulatory oversight and accountability – or if this regulatory compliance enforcement turns into another standoff at high noon.

If by Friday the South African National Defence Force (SANDF) has not provided proof it has returned 970,895 vials of the drug Heberon to Cuba, the SA Health Products Regulatory Authority (Sahpra) will confiscate and destroy the drug because it was brought to SA without authorisation, Parliament was told on Wednesday.

It remains to be seen whether the SANDF accepts civilian and health regulatory oversight and accountability – or if this regulatory compliance enforcement turns into another standoff at high noon.

In January, SA military police blocked members of the Hawks who accompanied Sahpra to confiscate the Cuban-made drug Heberon, or Interferon as the SANDF prefers to call it, from the South African Military Health Services’ Pretoria depot, according to the Sunday Times.

At the start of Wednesday’s parliamentary defence committee meeting on the 19-month Heberon saga, it emerged that:

“All of us are on Zoom. Surely the minister and the secretary of defence can be available wherever they are in the world,” said Marais, adding it was “totally unacceptable” that an adviser was writing to MPs. “It is unacceptable. It is unprocedural. It is totally wrong.”

The defence committee chairperson, ANC MP Cyril Xaba, said he should have added that the minister had called him on Tuesday “to confirm the communication”.

With an obscure reference to military allegations that Sahpra protected pharmaceutical “oligarchs”, he added that claimed sensitivities could not be ignored, but the minister would be asked to appear before the committee before Parliament rises on 10 December for the year-end recess.

As it turns out, that reference to pharmaceutical oligarchs stems from the Ministry of Defence briefing document submitted to the committee, although it was not discussed on Wednesday.

“Several senior members of the SANDF that engaged the MTT [Ministerial Task Team] alleged that Sahpra seemed to be doing the bidding for the dominant pharmaceutical monopolies or oligarchies that consistently seek to stifle any competition, especially one that unconventionally comes from the likes of the Republic of Cuba and any other source outside of the dominant Western axis led by US and European pharmaceuticals,” according to the Ministry of Defence briefing document on the MTT, seen by Daily Maverick.

The Ministry of Defence document also confirms that at least the first consignment of Heberon came to South Africa with the Cuban medical brigades in April 2020, apparently with the knowledge of South African diplomats. The other two consignments were delivered via Waterkloof Air Force Base, which, as a military airport, is not an officially recognised port of entry for imports.

The document sets out an important timeline.

Only on 27 August 2020 did the South African Military Health Service apply for authorisation to use Heberon. By 5 October 2020 Sahpra allowed the use of 10 vials for one patient. Several further requests for unlimited authorisations were rejected, amid a flurry of letters, which from May 2021 also dealt with the need for clinical trials of Heberon, which is not indicated for use in Covid-19.

Ultimately, it was a stalemate as Sahpra’s demand that it receive the details requested in its July 2021 letter before October 2021 was ignored.

This timeline was confirmed largely by Sahpra as it proceeded to publicly brief Parliament’s defence committee on Wednesday.

The regulator’s timeline sets out several unanswered requests for details. The military’s response by the end-September deadline was “inadequate” – and the clinical study was not authorised. This was communicated to the military by October.

“We communicated that study is not authorised,” said Sahpra CEO Boitumelo Semete-Makokotlela, adding that on 6 November the statutory regulator wrote to the South African Military Health Service that the Heberon vials must be returned to Cuba by 30 November.

“If we don’t receive evidence that this product has been returned, our team is then ready to go confiscate [and destroy] this product.”

Friday is already an extension of that deadline, seemingly because no one from the military has bothered to respond to the health product regulator.

Or, as the Sahpra briefing document to MPs put it, “Communication on the return of the product to Cuba is still awaited. A letter from Sahpra asking for evidence of this process has been issued.”

This timeline is crucial also because it kicks over to the Auditor-General’s probe into the Heberon debacle – from unapproved imports, cold-storage snags and the R34.86-million paid for the Cuban drug, but that had initially not been accounted for in the departmental records – and the qualified Ministry of Defence financials for the 2020/21 financial year.

Crucially, the Auditor-General had made a determination of material irregularity of which Kudjoe, the Ministry of Defence accounting officer, was informed on 13 August 2021.

This is important: determining a material irregularity is the first step in the process that could ultimately lead to personal cost orders against accounting and financial officers under the Public Audit Amendment Act.

Signed into law in November 2018, the act is hailed as a legislative tool to give the Auditor-General more teeth and hold government officials to account.

Once a material irregularity is declared, the onus is on the accounting authority, effectively a director-general, department head or in this case the secretary for defence, to further investigate and to take “appropriate remedial action”. If that’s not done, the law allows for a “certificate of debt”, effectively a personal cost order.

From the Auditor-General’s briefing document it’s clear that while on 28 September 2021 “[Kudjoe] responded and indicated that the department was in the process of appointing a clinical research organisation”, the Sahpra timeline shows that this clearly was no longer the case from October.

The Auditor-General’s notice of material irregularity is not disputed in the Ministry of Defence briefing document that confirms it was received on 13 August 2021 by Kudjoe, who’s been the secretary for defence since August 2020 following a brief stint from late September 2018 at arms company Paramount South Africa after serving as the first woman director-general of the State Security Agency from 2013 to 2016.

Curiously, the Ministry of Defence briefing document outlines “best case” and “doomsday” scenarios related to the expiry of the Heberon between March and July 2022, before recommending to the defence minister to consider “very urgently” to  “accede to the Cuban request to return 500,000 vials” for urgent use there before they expire.

“This should be accompanied by high-level diplomatic engagement with the Cuban government to manage the serious political fallout that would result from action,” according to the Ministry of Defence document seen by Daily Maverick.

What emerged from Wednesday’s defence committee meeting was how the Ministry of Defence remains out of step, given the clear and precise directions from Saphra, the statutory health products regulator, and the Auditor-General, a constitutionally established Chapter 9 institution to support democracy.

But the Ministry of Defence cocking a snook is not new.

As far back as April 2020 SANDF generals indicated their unwillingness to account to Parliament, the constitutional oversight body also on national security, according to Section 198(d) of the Constitution.

“You’re not our clients. We are not the police. We take instructions from the commander-in-chief [Ramaphosa],” SANDF Chief of Staff Lieutenant-General Lindile Yam told Parliament’s Joint Standing Committee on Defence on 22 April 2020 during a briefing on Covid-19 lockdown deployment.

Former secretary for defence, the late Sam Gulube, is on public record as saying that no information on Covid-19 infections among soldiers would ever be made public. The SAPS and other departments have released such details.

On 28 January 2021 amid the Heberon controversy and the failed Sahpra attempt to confiscate the drug, an SANDF statement said the Military Command Council “want to put on record that the surgeon-general is the only authority for medical force protection in the SANDF during war and peace time…”.

How Parliament’s defence committee handles this Hebron saga will test commitment to its constitutional responsibility of oversight and ensuring accountability. DM