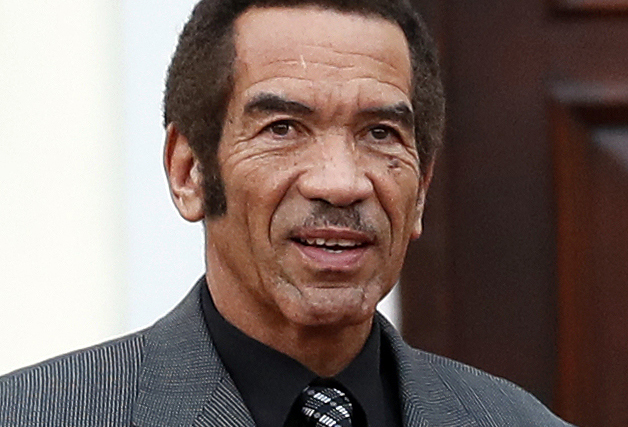 Ian Khama has spoken out about his current visit to South Africa, which he said was for meetings and not to flee arrest, as some media outlets reported.

In an interview with Daily Maverick, Ian Khama dismissed reports that he was attempting to flee arrest in Botswana, but he said that his successor, Mokgweetsi Masisi, had been using state institutions to go after him since their relations turned sour two years ago.

He also said that he found it strange that the South African government wasn’t speaking out against this more openly.

“The [South African] government itself has kept very quiet about it, from my perspective,” he told Daily Maverick on Friday, during an interview in the Sandton Sun’s business centre.

“I don’t know whether they just decided to take the position that this thing is before the courts and [the courts] must handle it, but certainly they could have investigated, as they had means to.”

In the court case, against a former intelligence agent Welheminah “Butterfly” Maswabi, allegations were made that Khama and South African businesswoman Bridgette Motsepe took more than $10-billion out of Botswana and deposited it in bank accounts in South Africa. This implicated the Reserve Bank and South African banks where Motsepe was alleged to have deposited the money.

Motsepe resorted to ordering a private investigation and subsequently got letters from the major banks in South Africa denying that any of the alleged companies — which have been found not to exist — held accounts with them. There were also no records at the Reserve Bank of any amounts equivalent to roughly half of Botswana’s GDP entering the country.

The court case was thrown out in August, but a mandamus application by AfriForum’s Gerrie Nel, on behalf of the Botswana prosecuting authorities, appears to be going ahead. In an affidavit last month, the director-general of South Africa’s justice department, Doctor Mashabane, said that the kind of investigation Botswana wanted South Africa to perform into the alleged money that went into its financial institutions would need a lot of resources.

He implied that South Africa had not received enough information from the Botswana authorities to conduct such an investigation with more speed. Mashabane was also scathing about the way this assistance had been sought despite the Botswana court finding that the evidence in the “Butterfly” case was fabricated and flimsy.

Botswana’s prosecuting authority, however, blamed South Africa’s refusal to cooperate for its lack of evidence and the collapse of the case.

Khama said if he and Motsepe had wanted to move so much money, they would have had to move it from the entities in which it was invested.

“You would have had to go through fund managers and people in the bank to have moved the money,” he said, adding that the prosecuting authority had not attempted to get any witnesses to that effect for the case.

Following the collapse of the case, Khama said allegations were made against him that he had stolen weapons, and he learnt about an intention by authorities to arrest him without a warrant this month. He said he told Botswana’s director-general of Intelligence and Security Services, Peter Magosi, that his agents could come and get the weapons in question, some of which belong to members of his official and private security detail, but nobody came to get them.

Khama, a military man who was formerly commander of the Botswana Defence Force, keeps his hunting rifles, shotguns and “a few handguns”, all collected over a period of 30 years, at his home.

On 8 November, the deadline that Magosi gave him to return the firearms, Khama entered South Africa through the Groblersbrug/Martin’s Drift border post.

A qualified pilot who often flies himself, Khama said he was in a hurry to get to a meeting in South Africa and couldn’t get a plane on time.

“I wasn’t in the capital [Gaborone] and there is no [international] airport or airstrip near where I live [in Serowe]. I would have had to have driven back to the capital and try to organise an aircraft at short notice. I was only told on Saturday about a meeting I wanted to do on Tuesday,” he said.

Some of the meetings were with local officials about his difficulties in Botswana.

Despite reports that his government didn’t know where he was, Khama said he went through the border “the regular way”, without having had to skip the country or jump any fences.

He also said the four intelligence officers who are usually with him (former and present presidents have these as part of their official security detail) did not cross the border with him for reasons that were unknown to him.

His private security guards were with him. Some are ex-soldiers he knew “from my army days”, because he felt he couldn’t trust the government-appointed security guards.

The head of this private security was at some point taken for questioning by law enforcement authorities, but “they had no questions of any relevance, it was just part of the intimidation,” Khama said.

Khama said he would return to Botswana soon and denied reports that he was in exile or that he had fled the country after threats to arrest him and security agency searches at his home.

Khama also claimed there had been an attempt to poison him in the run-up to Botswana’s 2019 general elections. This substance was said to have come from Zimbabwe’s Central Intelligence Organisation, “but it’s only the South Africans who have the capability of producing poison like that”.

There were allegations earlier that year that Khama and Motsepe, with the help of South Africa, were planning a coup against Masisi. Motsepe was also accused of funding a campaign to oppose him at the Botswana Democratic Party (BDP) conference earlier in 2019, something she denied, although she nevertheless was slapped with travel restrictions by Botswana.

Khama left the BDP, of which his father, Sir Seretse, the first president of Botswana, was a co-founder, and joined the opposition Botswana Democratic Front, which lost the 2019 elections. The upcoming by-elections in 11 constituencies are expected to reopen some of this contest.

Khama has asked the United Nations Special Rapporteur on extrajudicial, summary or arbitrary executions to investigate the attempts that he claimed had been made on his life, but the Botswana government did not respond to a letter from this agency and said nothing had been reported to the police. Khama said he had reported incidents to the police, but nothing happened.

At the heart of this fallout is, according to Khama, a personal dispute. “[Masisi] couldn’t accept that after I left office I would still continue to have public engagements,” he said. Khama used some of these platforms to criticise Masisi.

Accusations that Motsepe has involved herself in Botswana’s internal political fights have complicated matters for President Cyril Ramaphosa. She is his sister-in-law and any intervention from him could be interpreted as undue interference.

The then minister of international relations Lindiwe Sisulu travelled to Botswana in April 2019 to assure the government of South Africa’s ongoing support.

On the surface, things appear to be going better. In March 2021, Masisi visited Ramaphosa to lobby for support for its candidate, Elias Mpedi Magosi, to be appointed SADC executive secretary. Government sources said South Africa supported him because of his experience outweighing that of the candidate from the Democratic Republic of Congo.

Even though former Public Protector Thuli Madonsela and Judge Dennis Davis have vouched for Motsepe and Khama’s integrity at different times, Khama nonetheless felt leaders in southern Africa could be more outspoken against their peers who harass opposition politicians.

Khama himself, during his time as president, from 2008 to 2018, spoke out against some of his peers.

“I was even prepared to do as I said, that I would not attend a SADC summit if [former Zimbabwe president Robert] Mugabe was there, just to protest that the elections [in Zimbabwe] were rigged,” he said. “But you have this kind of solidarity [between presidents] that they shouldn’t criticise one another, or do anything against the other.”

In private, however, some leaders told Khama that they thought what Mugabe did was wrong.

Khama considers Masisi to be a leader who is driven by envy and has an inferiority complex.

“I know for a fact that Masisi is not well-disposed towards South Africa and Cyril Ramaphosa because he sees himself as enjoying a profile, a status over others, and that’s why he travels all over the place. He is envious of South Africa’s position,” he said, with reference to South Africa enjoying a prominent international standing.

Khama was possibly expecting more hospitality from South Africa, because at the conclusion of the interview he recalled a childhood memory of how ANC leaders in exile during the Struggle years were harboured by his father.

“It’s ironic that now that things have changed around, that I, as his son — not that I’m seeking asylum or anything — I was here to discuss the persecution going on in Botswana.” DM