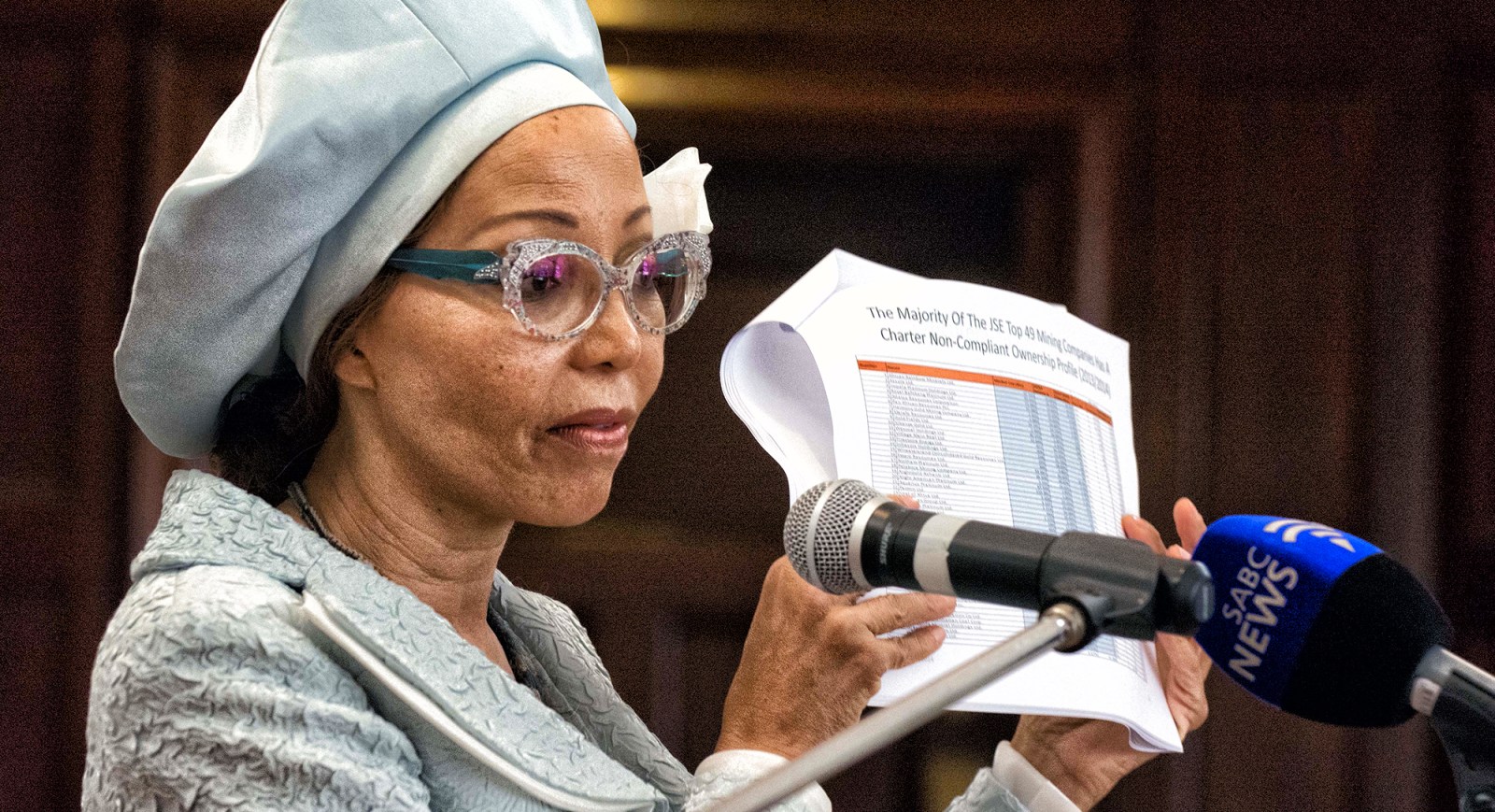 Sisulu confirms she travelled to Gaborone to meet President Masisi to assure him relations were still solid. And while South Africans generally did not require visas to visit Botswana, Masisi had confirmed to her that his government would now require one from Bridgette Motsepe-Radebe if she wished to travel to his country.

Pretoria says the Botswana government has accepted that the South African government had nothing to do with an alleged attempt by President Ramaphosa’s sister-in-law, Bridgette Motsepe-Radebe, to influence the outcome of Botswana’s ruling party’s recent leadership elections.

Lindiwe Sisulu, Minister of International Relations and Cooperation said this at a press conference in Pretoria on Tuesday.

She confirmed she had travelled to Gaborone on 19 April as Ramaphosa’s special envoy to meet Botswana’s President Mokgweetsi Masisi.

Her mission was to assure him that Motsepe-Radebe’s alleged attempt – initially reported in the Botswana media – to fund a rival candidate to Masisi in the Botswana Democratic Party’s leadership election “has nothing to do with the government of South Africa.”

Sisulu said her task had also been to convey to Masisi that relations between South Africa remained “extremely solid.”

“What the President of Botswana indicated was that he was very happy that an envoy had been sent to Botswana to give the necessary assurances, but that he had no doubt that the government of South Africa had no role in anything that might have appeared in the media,” Sisulu said.

She added that although South Africans generally did not require visas to visit Botswana, Masisi had confirmed to her that his government would now require one from Motsepe-Radebe if she wished to travel to his country.

This would enable them to check “what might be of concern to them” relating to what had been reported about her, if she entered Botswana.

Sisulu said she could not comment further, including whether or not her government had investigated the allegations against Motsepe-Radebe, or intended taking action against her, as the matter was “sub-judice” because Motsepe-Radebe had taken legal action. This seemed to be a reference to Motsepe-Radebe reportedly suing Botswana’s Sunday Standard for its report that she had tried surreptitiously to finance the campaign of former foreign minister Pelonomi Venson-Moitoi to unseat Masisi as the BDP’s presidential candidate for national elections in October.

Venson-Moitoi was heavily backed in this campaign by former Botswana President Ian Khama, who has had a bitter fallout with his successor Masisi. Venson-Moitoi withdrew from the nomination contest against Masisi on the eve of the BDP’s party congress early in April, leaving Masisi to be re-elected unopposed as party leader and its presidential candidate.

Venson-Moitoi claimed she had pulled out because many of her supporters had been barred from attending the party congress.

Motsepe-Radebe has mining interests in Botswana. She is the sister of Ramaphosa’s wife Tshepo Motsepe and of billionaire businessman Patrice Motsepe and is married to Energy Minister Jeff Radebe.

She reassured team from the Southern African Development Community (SADC) which is in South Africa to monitor next week’s elections that it need not fear xenophobic attacks.

The head of the SADC Electoral Observation Mission, Zambian foreign minister Joseph Malanji, had said at a press conference in Pretoria on Monday that some of his election observers – who represent ten regional countries – had expressed fears about visiting parts of South Africa which were prone to xenophobic attacks.

He added that he intended to meet Sisulu and police minister Bheki Cele to seek assurances that the observers would be safe while monitoring the elections in all nine provinces.

Sisulu said on Tuesday that she was ready to assure Malanji that “we are on top of the situation. Anyone who finds himself faced with an attack of any nature, it is a purely criminal matter. And it should be reported immediately to the police.”

But she went on to say that the ruling ANC was “very concerned” about xenophobia, noting that Ramaphosa had called on South Africans in his Freedom Day speech last week to respect foreigners in this country “because we cannot be daubed with the paintbrush of xenophobia.” She insisted there had been no rise in xenophobia since the attacks on Malawians in Durban recently. She noted that after those attacks her government and African diplomats posted in Pretoria had agreed to form a task team to address xenophobia and this team would be meeting for the first time on Friday.

Sisulu also volunteered that she could not confirm media reports that ousted Sudanese President Omar al-Bashir had been given refuge in Zimbabwe.

She said the last she had heard, he was still in prison in Khartoum.

Sisulu and Ramaphosa participated in an African Union meeting in Egypt last week to discuss the way forward both in Sudan and Libya. The meeting of AU leaders decided to allow the military council which has taken power in Sudan to govern the country for three months, before handing over power to a new civilian administration (the AU’s Peace and Security Council had earlier demanded that the military council quit office after only 15 days).

Sisulu said a representative of the military council had persuaded the heads of state in Egypt that it needed longer to ensure an orderly handover of power to a civilian government. Sisulu told Daily Maverick the AU heads were persuaded by this argument as there was no civilian government ready to take over.

The AU heads extended the military council’s deadline to three months, subject to approval by the AU Peace and Security Council. Sisulu said this council had not met to ratify the decision and so in the meanwhile, the three-month deadline still stood.

The Cairo meeting also discussed the crisis in Libya, where Benghazi-based General Khalifa Haftar’s self-styled Libyan National Army has been fighting for weeks in the suburbs of the capital Tripoli to try to topple the Government of National Accord, backed by the UN and most of the international community.

Sisulu said South Africa and the AU were demanding not only that Haftar withdraw his forces from Tripoli but that all combatants – including the Tripoli government and the various militias – cease-fire so that the AU could intervene to seek peace.

Sisulu also said that negotiations to reach agreement on a financial assistance package for Zimbabwe were “still a work in progress.” She added that when Finance Minister Tito Mboweni had met both his Zimbabwean counterpart and the Zimbabwean Reserve Bank governor in Harare in March he had discovered “that actually there was a great deal of backlog to cover for us to be able to resolve the issue of the finances of Zimbabwe.

“That is why the President took the decision that we would have a working team to see how we could assist them to get out of the situation. We’re not going to be able to get out of this situation tomorrow, or the next day, because it’s something that has been there for quite a while. But we have a very good relationship with the Minister of Finance and our Minister of Finance. And we will report to you as and when we have any positive news to report.”

Sisulu declined to comment on a report by the Gift of the Givers charity group that it had just received a video proving that the South African journalist Shiraaz Mohamed, who had been abducted in Syria in January 2017 was still alive.

Sisulu said “the situation is very delicate” and so “the less said the better for the person concerned and those negotiating”.

Sisulu also announced she would soon be visiting Mozambique again to assess how South Africa could step up aid after the second cyclone hit the country over the last few weeks. South Africa provided assistance after the first cyclone hit last month, devastating large tracts of the country. DM