Were ‘senior people’ involved in planning the unrest? The NPA ‘can’t divulge’ that 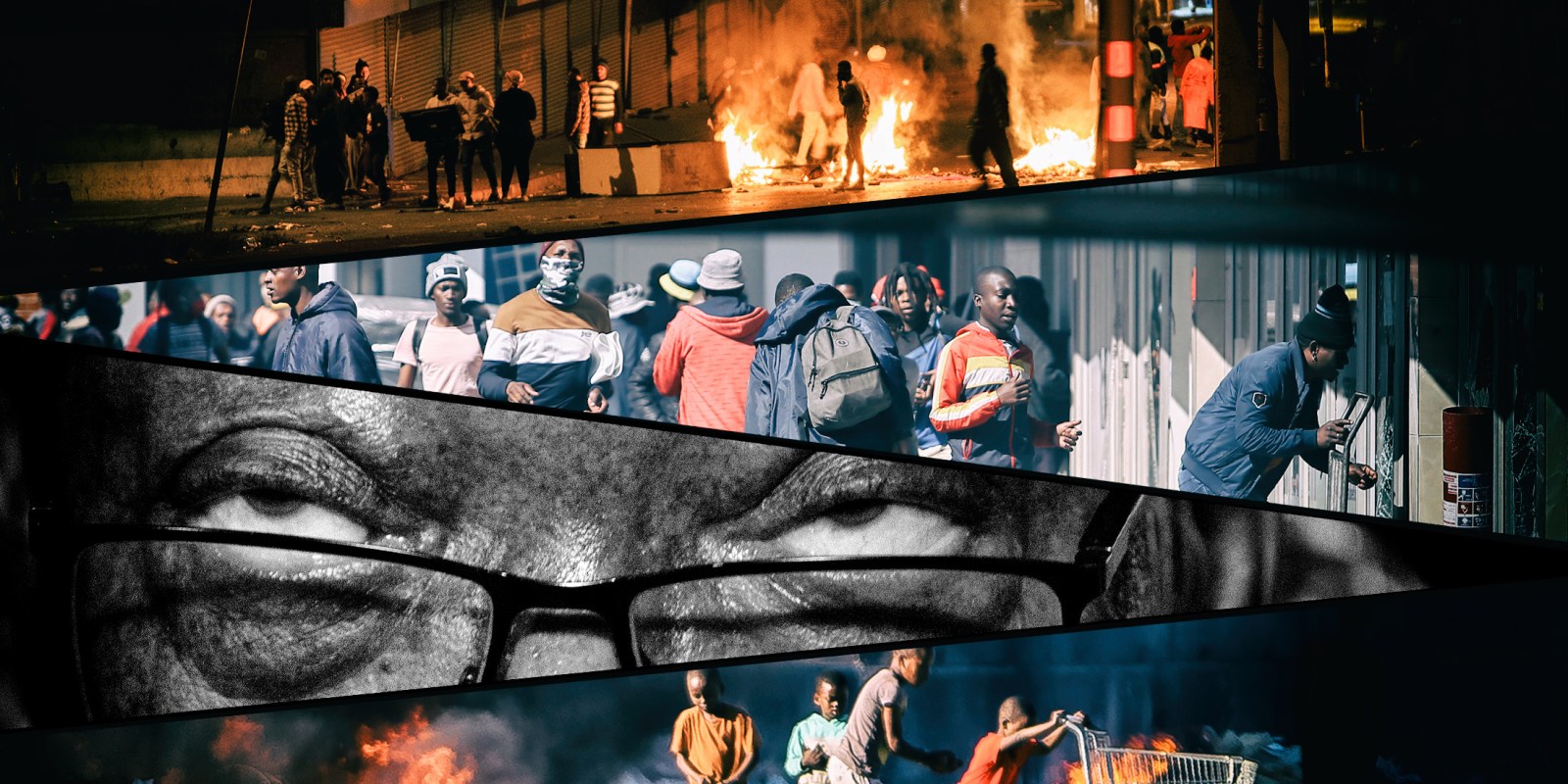 It is close on five months since the devastating July unrest that resulted in KwaZulu-Natal and parts of Gauteng coming to a standstill for eight days, but the National Prosecuting Authority is still unable to confirm if there was a ‘bigger scheme’ to the looting and riots.

The National Prosecuting Authority’s (NPA’s) senior advocate, Kwena Mashamaite, told the SA Human Rights Commission (SAHRC) on Thursday that the organised crime unit within the NPA in KZN was still investigating if any of the individual alleged instigators of the violence that were arrested in the province “fit into the bigger scheme, if there is a bigger scheme, which we are trying to get to”.

It was all cloak and dagger from Mashamaite, who was unwilling to publicly give the commission the names of three of the alleged inciters of public violence in the province, despite all three having appeared in court and their details being a matter of public record.

Bonginkosi Khanyile and Jackie Shandu were individually charged for what appear to be unrelated incidents of incitement and released on bail. Ndumiseni Khetha Zuma was denied bail by the Pietermaritzburg Magistrates’ Court in October. He faces charges of contravening the Riotous Assemblies Act relating to the torching of the Brookside Mall in Pietermaritzburg.

The SAHRC is in the province to investigate the riots and the causes thereof. Commissioners have heard testimony from the victims of allegedly racially motivated violence in Phoenix and Pietermaritzburg, politicians, business chamber CEOs and National Police Commissioner Khehla Sitole, among others.

The civil unrest in KwaZulu-Natal started with sporadic incidents on 8 July after former president Jacob Zuma was jailed for contempt of court, but by 11 July had escalated to levels of destruction, criminality and rioting on a scale not previously witnessed in democratic South Africa.

Malls, warehouses and factories were targeted by thousands of looters and arsonists, scores of them the indigent from informal settlements, while others – many driving cars and living in suburbs and townships around the province – were armed with firearms and other weapons.

In the absence of “overwhelmed” police throughout the province, and a significantly delayed response by the SANDF, community policing forums and hundreds of neighbourhoods formed patrol groups to protect themselves, their malls and their families.

Some vigilante groups also emerged though, who took a criminal approach to “protection”, actively engaging with alleged looters and ordinary citizens and allegedly committing brutal acts of violence in the process, particularly in Phoenix.

Melis told commissioners Andre Gaum, Chris Nissen and Philile Ntuli that currently there were 20 matters before the Verulam court relating to the unrest in Phoenix, which excluded murder matters.

“Offences in those 20 cases range from malicious damage to property to attempted murder, assault with intent to cause grievous bodily harm (assault GBH), firearms and ammunition-related charges, possession of suspected stolen property.

“Of the 20 cases, one has been finalised with a guilty plea. The remainder are still pending investigation. There has been a lot of court time spent in the last few months with bail applications for these matters; each has more than one accused, in some matters up to seven per case. Bail applications have occupied court time,” said Melis.

Informing the commissioners about the cases in her scope, Dube said that there were currently six on the roll in the lower courts, which included murder, attempted murder, unlawful possession of firearms and ammunition, and assault GBH.

The State opposed bail in all of the matters, she said. Five bail applications had been finalised; one was outstanding. She said the NPA had received eight dockets from the SA Police Service, but only six were enrolled. The two not on the court roll were still being investigated. There were multiple accused in each matter besides one, and all were being represented by private attorneys or advocates.

The “modus operandi” was the same in all of the cases, she said. “People were being attacked by a group of people, except for the last one, it was a single accused and a single victim.” As witnesses came forward, counts would be added.

Asked by one of the SAHRC’s evidence leaders, advocate Rantsho Moraka, if she and the team looking into the murders had been allocated sufficient resources, and if her prosecutors were sufficiently experienced, Dube responded:

“There are three advocates heading up the matter, and myself. These advocates don’t usually prosecute in lower courts, but the DPP [Director of Public Prosecutions] allowed that to show how seriously the NPA takes the matters.”

According to Police Minister Bheki Cele, speaking before the National Council of Provinces just after the unrest, more than 300 people died because of the riots, the vast majority of those in KwaZulu-Natal. Of the KZN deaths, Premier Sihle Zikalala has said publicly that the majority were looters who were crushed while trying to steal goods, or stabbed by fellow looters over stolen goods.

Zikalala is set to testify before the commission on Friday.

Expanding on the scope of his investigations, Mashamaite said his team was looking at “the organised crime level, the instigators”.

“At organised crime we are looking at where and how it started, and by who and why. The instigators would have contravened the Riotous Assemblies Act and instigated people through social media, through meetings, or other means. [The instigators would also have been] so-called leaders or were at the front and encouraged others.

“We are looking at those to see if they were financed by others and had a particular mandate from someone else. We currently have in KZN three cases where people have been arrested and we believe they were inciting through video messages or voice messages or social media.”

“These investigations will always take time as you have to analyse a lot of information.”

Besides the three alleged instigators, his unit was also working on four more “decision dockets” – where it had not yet been decided if the matters would go to court.

Two other matters had already been closed due to lack of evidence, he said, adding that there were four “dedicated and experienced advocates” in the organised crime unit of the NPA in KZN looking at the instigators.

Prompted by Moraka, Mashamaite said he could not divulge if there were “senior people” involved in the planning of the riots.

“We have to be very careful. [The unrest] occurred in July; we are now in November 2021. It has been four to five months of investigations. It is very sensitive. Whether we divulge who is involved and at what level, I don’t think this would be the right platform to talk about those issues as it has a serious potential of affecting the investigations, that’s why we don’t even mention names or who will be potential witnesses.”

“[The SAHRC] investigation is wide,” said Moraka. “We know of statements made by high-ranking officials who have police reports, and from the military. We want to know who was behind the unrest.”

Replied Mashamaite: “It would be difficult for any individual to understand what goes on behind the scenes in terms of investigations….”

The advocates in his unit were working with the Hawks, Crime Intelligence and digital forensic investigators, said Mashamaite.

“To say there is nothing to show from the NPA is unfair and misleading information, because as the NPA and stakeholders, we are getting to the bottom of it. At the right time, people will be able to see what is behind the scenes.”

There was a possibility that those who were under investigation were listening, he said, and that “issues of state security” could not be discussed freely, particularly in front of the media. He asked the commission to “bear with us”.

President Cyril Ramaphosa has labelled the unrest an attempted insurrection. Drawing on this, Moraka asked if Mashamaite was “aware of any docket within your institution that is specifically relating to treason or sedition, or something of that nature”.

Responded Mashamaite: “In KZN we are looking at any type and form of offence. Investigations are still unfolding; new charges can be added based on evidence. For now, it would be premature to say yes or no about treason or sedition.”

When it was time for the commissioners to ask questions, Gaum wanted to know how many dockets there were in KZN, in total, relating to the looting.

“And how many decisions to prosecute?” asked Gaum.

“All but 64 are not enrolled. The remainder are being prosecuted,” responded Melis.

Here, Mashamaite interrupted, mentioning “protocol being followed”. Regarding some of the information requested by the commission, “there should be proper engagement with our national office and the DPP”. DM