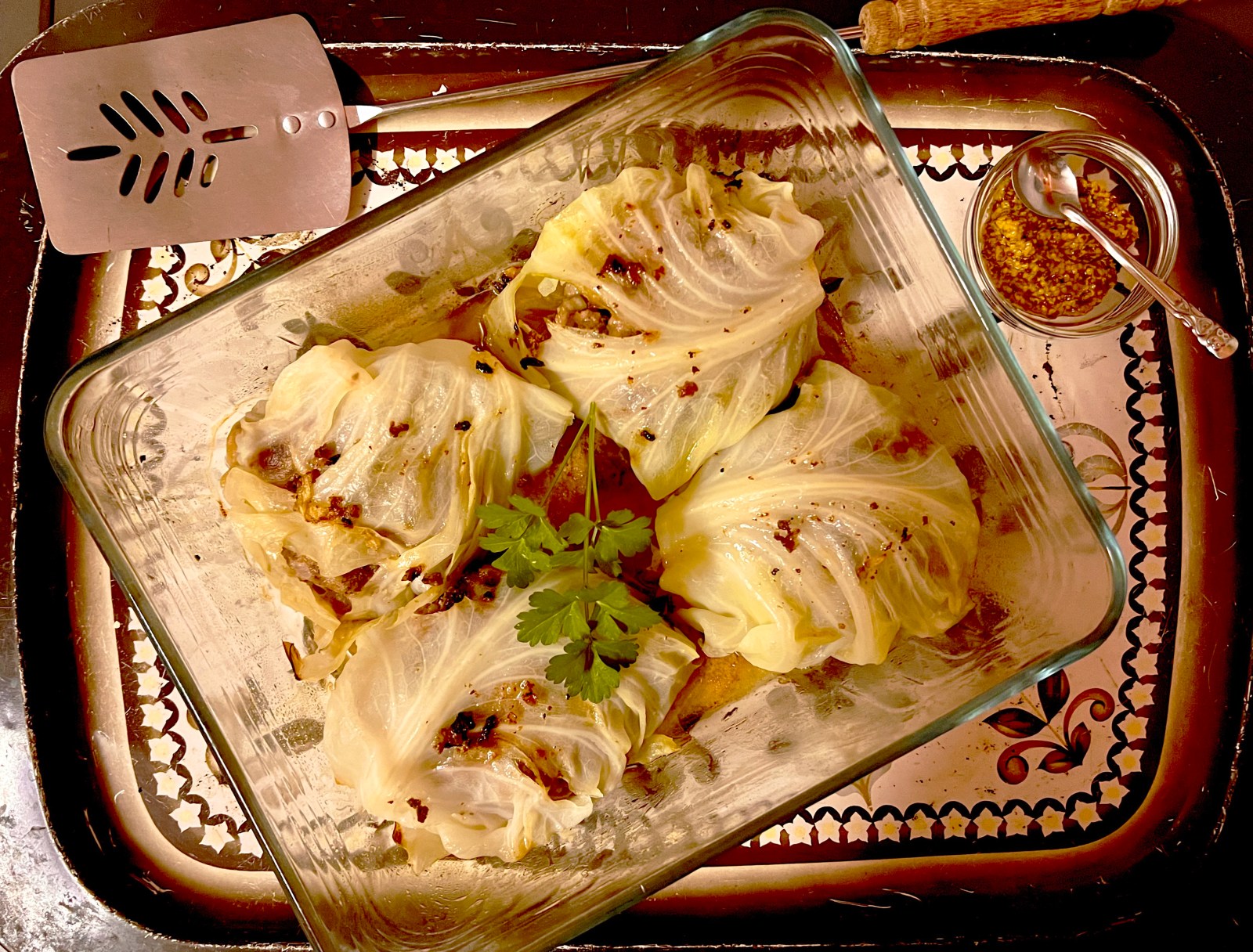 Like many of the world’s simple but staple dishes, cabbage and meatballs are found in cuisines from Sweden to Serbia, North Africa to Asia, and of course down in South Africa where we call them ou mense onder die kombers, sometimes ‘ouma’, sometimes ‘ouvrou’, even on occasion ‘kinders’, worrying as that thought might be. Whatever you choose to call them, there aren’t actually any old people or children involved, and they’re as comforting as granny’s slippers.

Meatballs wrapped in cabbage leaves are a popular family supper in both the old Cape Dutch and Cape Malay traditions, though in slightly different ways. The Cape Malay version differs in that the blanketed meatballs are cooked on top of a partially cooked bredie, or mutton stew.

But variations on the theme of cabbage-wrapped meatballs exist all over the world. Many international variations are made of beef, chiefly, and a smaller quantity of pork: Germany’s kohlrouladen; Slovakia’s holubky; Serbia’s sarma, and Hungary’s töltött káposzta, which are pork-based and served with sour cream, some with sauerkraut. Poland’s gołąbki, a.k.a. “little pigeons”, are a national favourite comfort food with a filling of minced beef, pork and rice wrapped in a cabbage leaf and served with rice and apple sauce. Sweden has its kåldolmar while Finns have their kaalikääryle. There are variations on a cabbage and meat theme from western Asia to northern China, and in parts of North America where Polish immigrant communities still eat them.

To get right back to basics, let’s start with the standard South African dish as described in SJA de Villiers’ classic Cook & Enjoy. Her recipe is straightforward, no frills, and the meat is either beef or mutton mince with a smaller amount of pork mince. Like most recipes it includes milk-soaked bread (which must be squeezed out so that your meatballs don’t become soggy), onion, parsley, a little nutmeg and the binding of an egg. Instructions vary from recipe to recipe in this regard; some call for two or even more eggs, others for two to four slices of bread. Cook & Enjoy requires only one slice of bread and one egg.

On the other end of the scale you get Jan Hendrik van der Westhuizen’s modern take on the classic dish. He uses baby cabbages and seed bread (almost every other recipe calls for white bread), beef mince and parsley, but adds garlic, which many recipes do not have. His recipe has a tomato sauce made with baby Rosa tomatoes flavoured with basil, garlic and parsley, and that’s where, in his version, the nutmeg goes as well. Other recipes sometimes call for a grating of nutmeg on the prepared cabbage-wrapped meatballs before they go into the oven.

JAN offers a posh French version too. Called Ouma’s French Makeover, it uses Savoy or Chinese cabbage, with a filling of herbed pork sausages and pork mince with garlic, thyme, brandy, green olives and cornichons (the fancy term the British favour for gherkins), and cooked in a bainmarie in the oven for an hour as you would a French terrine.

In my browsings I found a recipe that includes ginger, another with cumin, and some of the old traditional recipes call for the dish to be served with mustard on the side. In my version, I have taken some of these elements but ignored others. I wanted to keep it simple while ensuring a delicious flavour, and it’s important to salt the meat fairly generously or they will turn out too bland.

So I did use garlic, and I included a tablespoon of wholegrain mustard in the mince before forming meatballs, while also serving some mustard on the side. I also added the grated zest of a small lemon, as I felt the mixture needed a bit of zing. I chose to make big, really plump meatballs and to use the outer leaves of a large cabbage, which is more in line with traditional old Cape recipes.

Polite versions of how to deal with the cabbage leaves would have you cutting away the hard stems of the leaves, but look at the picture: aesthetically that curvaceous curl of leaf looks just great, and if blanched well they’re soft enough at the core to eat.

Grated zest of 1 small lemon, or of ½ a lemon

A grating of nutmeg

Preheat the oven to 200℃. Soak the bread in the milk, then squeeze it out.

Using clean hands, mix together the mince, (squeezed out) bread, lemon zest, onion, garlic, parsley and nutmeg, season well with salt and pepper, and then work in the beaten egg, still using your hands. You need to really squish it around.

Shape into meatballs and roll them around in flour on a board.

Wash the cabbage leaves and plunge them into boiling water for about 5 minutes, then drain thoroughly. They don’t need to be refreshed in cold water as you would when blanching to retain crispness and the green hue.

Fry the meatballs in butter and a little olive oil until browned all over. Season with salt and pepper as you cook them. Don’t pack them in the pan too tightly.

Pat dry and wrap each meatball in a (patted-dry) cabbage leaf.

Arrange them in a greased baking dish and add any remaining juices from the pan in which you fried the meatballs.

Bake for 20 to 30 minutes and serve with rice and wholegrain mustard. Spoon the juices from the oven dish over the rice. DM/TGIFood

Sources include Wikipedia, Cook & Enjoy and the District Six Museum.