‘Uncertainty on steroids’: DMRE will not appeal Min...

‘Uncertainty on steroids’: DMRE will not appeal Mining Charter ruling but may change law

‘Uncertainty on steroids’: DMRE will not appeal Mining Charter ruling but may change law

Gwede Mantashe, South Africa's mineral resources minister, looks on during the opening day of the 'Investing In Resources And Mining In Africa' Indaba in Johannesburg, South Africa, on Wednesday, Oct. 3, 2018. (Photo: Waldo Swiegers/Bloomberg via Getty Images)

The Department of Mineral Resources and Energy (DMRE) will not appeal the September High Court ruling which set aside key aspects of the Mining Charter, notably those related to black ownership targets. But it could still muddy the policy waters by changing the law in a way that analysts say will be investor unfriendly.

In a presentation to parliament on Tuesday, the DMRE said that: “Appeals to the Supreme Court of Appeal and the Constitutional Court, the outcome of which remain uncertain, may take several months or years to conclude, and will prolong legal uncertainty and delay transformation.

“Commencement with Parliamentary processes to review the transformative legislative framework, as opposed to persisting with litigation, is likely to better achieve much-needed legal certainty and the acceleration of transformation of the minerals and mining industry,” it said.

So the department has signalled that changing the law will be its best tactic to keep the Charter’s black-ownership targets in place. That is a recipe for uncertainty: the DMRE might as well put up a big sign that says “Investment in the Mining Sector not Wanted” — because its ham-fisted approach to policy is going to achieve just that.

The Pretoria high court ruling in September ruled that once a mining company is empowered, it is always empowered.

The mining industry argued that once a company has met the threshold for black ownership of 26% as laid out in previous charters, or 30% for new mining right applications, that holds — even if the empowerment-holders subsequently sell their stake.

The government’s view is that such ownership targets remain in perpetuity, so a company would have to keep upping its BEE ownership stakes, generally at considerable cost. This is a key reason why investment in South Africa’s mining sector has been downhill and attempts to keep this policy — which is perhaps well-intentioned but has proven to be misguided — alive will only accelerate the trend. 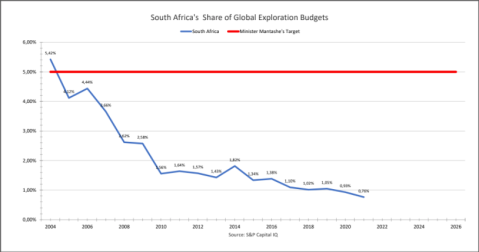 “Looks like the DMRE will look to amend the MPRDA (Mineral and Petroleum Resources Development Act) to force through these investment unfriendly provisions. Since a new amendment bill is not already part of the legislative timetable, I imagine it will take a few years to process from a standing start. Especially since the process will be highly contested. Any investors who have not already long given up, will now finally be packing their bags,” he said.

Mineral Resources and Energy minister Gwede Mantashe has insisted before, against a mountain of evidence, that the charter provides regulatory certainty. The DMRE’s latest signalled intentions will muddy the policy waters even further.

“The ANC government has been quite clear that it intends to do by fresh legislation, what it’s been forbidden from doing by this court judgement. They stated explicitly to the Portfolio Committee that racial transformation of the industry and growth of the industry are not mutually exclusive. The reality is that they are. We can have one or the other but not both. This is proved by South Africa’s declining investment figures,” James Lorimer, the Democratic Alliance’s shadow minister for mineral resources, told Business Maverick.

The charter has always had the noble goal of raising black ownership in South Africa’s mining sector and spreading its benefits more widely. The industry was after all the foundation of the exclusionary and iniquitous apartheid political economy. But the requirement of keeping an ownership target in perpetuity will defeat that purpose as it is effectively killing foreign investment in the sector — investment which South Africa’s low savings rates cannot fill.

It is just another sign of the dysfunctional state of the DMRE, which cannot do the basics of its job like process mining applications in a timely manner, let alone develop sensible policies.