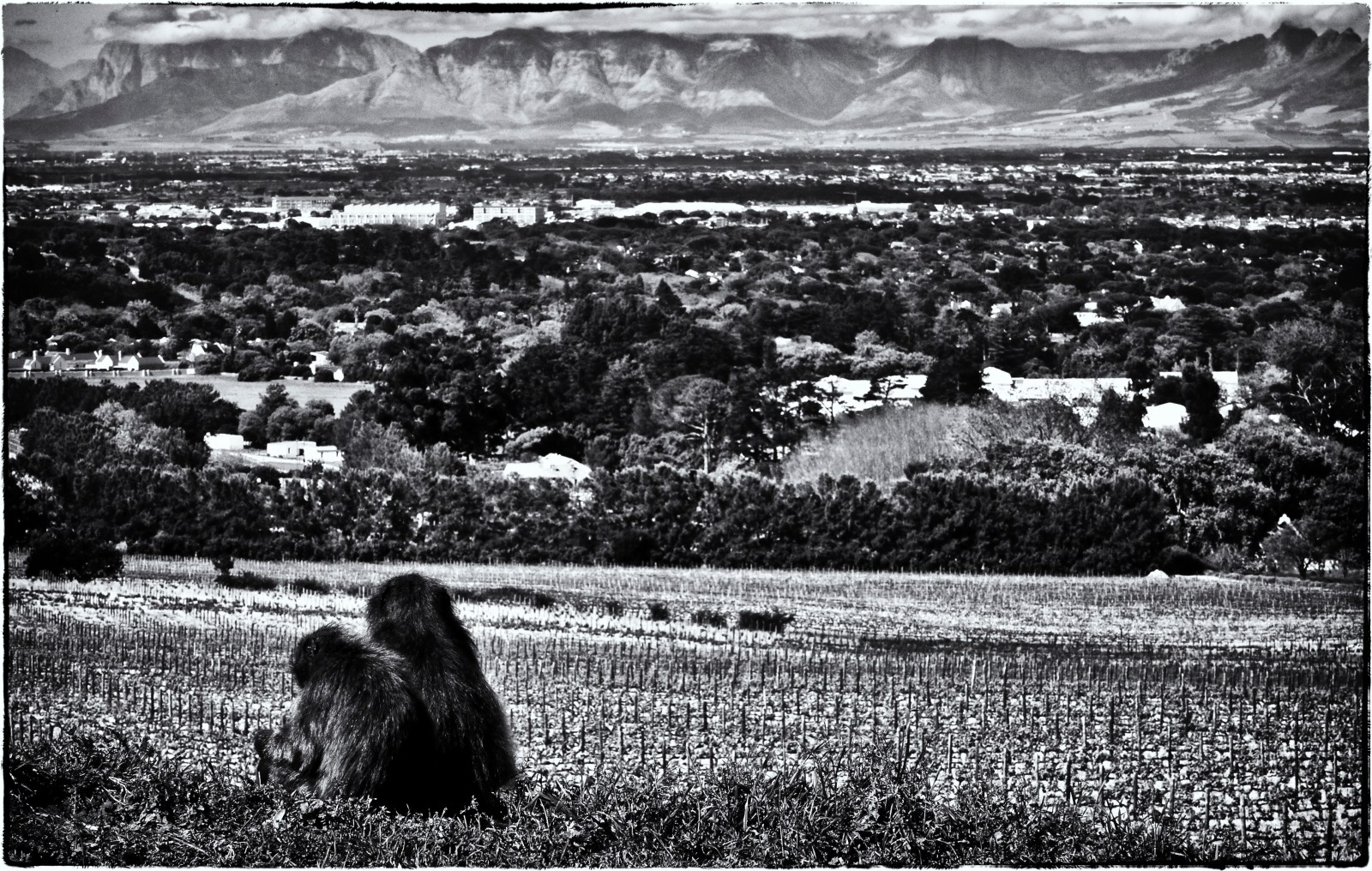 Unlike baboons, we have an understanding of representational visual or oral language. Why we have it and they don’t is an interesting way to understand photography and how we think.

Despite taking thousands of photographs as a photojournalist, I’d never seriously considered the art of photography. One of the reasons is the vexing, much disputed, over-saturated term “art”. What on Earth is it?

In the way things sometimes do, the beginnings of an answer came from an unexpected direction: my rather odd obsession with baboons. They’re not only fun to watch and almost uncomfortably human, they’re also damnably clever. But how clever?

A few years ago a friend who’d watched them harassing tourists near Cape Point said it was lucky they hadn’t worked out how to open car doors. Not long afterwards rather hysterical reports were coming in saying they had. And once one had figured it out, within 24 hours, the rest of the troop had got the trick. That’s not good news for baboons.

The smarter they get the less people tolerate them. But there are many things they can’t do, like construct a sentence, use and make tools, alter their environment to their advantage – or create artistic representations of their worldview.

On the tree of life, survivors are those who developed skills appropriate to their survival. The converse is also true: skills that were not appropriate (if they ever appeared) soon disappeared. Around 30 million years ago all apes had a common ancestor.

On our solitary evolutionary path to here and now we learned to communicate through sounds, worked out tool usage, massively altered our environment to our advantage (unfortunately for many other species) and developed a large cerebral cortex. And – considering the pattern scratched on a bone found in the Blombos Cave in the Southern Cape – invented art. Those were survival skills.

Current research into baboon behaviour has some important things to tell us about how we got so far in the smarts business. After closely observing baboons in the Okavango Delta for many years, behavioural scientists Dorothy Cheney and Robert Seyfarth discovered that they (the baboons) spent much of their time gossiping and eavesdropping on others of their troop.

While they had only 14 types of vocalising or “words”, their responses to these words and the movement of the troop indicated that they held in their minds many more concepts for which they had no words. They may have been “pre-language”, of the most rudimentary sort, but they clearly had a language of thought.

Studies on baboons and other apes, including chimps, show that they all have considerable ability to form ideas and discern and remember sounds, but no ability to represent them.

You’re wondering where photography got to. Hang on, I’m coming to that.

A language of mind has structure and requires that the thinker has a sense of self and of their separation from others and the world. Baboons have this, which makes them such fun to watch, but they live in the present tense. They lack the insight to imagine a different world. Or to change it.

Baboons stopped right there and chimps got a bit further, but humans learned to imitate sounds in a way that associated them with objects and actions. There is much debate about why they did this, but it’s possible that social survival favoured those with empathy – which neither baboons nor chimps have because it requires a mental conception of the “other”. And empathy favoured a desire to communicate.

A female baboon, hearing its offspring yelling in fright, more often than not completely ignores it. It would be like a mother in a supermarket ignoring her child howling in the next aisle.

Empathy requires introspection, which baboons are seemingly not good at. We can sense what the other is feeling. The difference was captured rather well in a sermon by John Donne in 1682: “The beast does but know, but the man knows that he knows.”

If the desire for language followed evolutionary pressure for empathy, language itself required a prior language of thought. Such a language necessarily has rules. The image of an object, say a cat, is nested in the idea of cats, which in turn is nested in the context within which the cat is being observed.

Now you may notice that this construction could be a way of describing sentence construction in spoken language, with nouns, verbs, prepositions and all the rest. There is a connection. Cheney and Seyfarth suggest the reason is that language was constructed on the framework of a preliterate language of mind.

The reason for this framework is that, because of the complex societies – or troops – in which primates and certain other species lived, there was evolutionary pressure, advantage if you like, to understand and remember complex social patterns. Baboons are very good at this and clearly know much more than they can communicate.

There’s the well-documented story of railway signalman James Wide and his baboon Jack from the late 1800s. Wide lost his legs in an accident in Uitenhage and took a job at a small siding where he enlisted the help of his tame baboon. Each day – for years and at exactly the right time – Jack would switch signals, divert trains and push Wide around on a trolley when necessary.

There’s also the story of Ahla, a baboon on a Namibian farm who was employed as a goatherd. Her ability to recognise kinship relations was remarkable and lost kids were immediately scooped up and returned to their mothers.

In a troop of maybe 80 baboons, a single member recognises the individual calls of every one. In laboratory situations, baboons and other primates (as well as dogs, dolphins and parrots) have learned to respond to hundreds of words and whole sentences, recognise colours and work out complex problems – none of which would be possible without an ordered conceptual language. They’re all much smarter than they sound.

Okay, now let’s get back to photography. An image is the representation of an idea that bypasses language. It’s a mental representation that requires a language of mind and the ability to express this language in the world.

If a baboon had the ability to use tools, it could conceivably create a painting, because it has the mental ability to conceive it. But it doesn’t – we are the only species we know of that can.

When we paint or draw or sculpt, the result is the idea of something (an object or shape) nested in that thing’s context, nested within the confines of the materials at hand using a structured process defined by the ability of the artist. Art, therefore, is multiply nested, representational visual syntax – in the same way that language is multiply nested oral syntax expressed in sentences.

Poor baboons, they have the mental machinery but not the ability to express it. That could take another 20 million years.

Photography is a more precise form of art. The structured process of a photograph is a mental representation of a moment in time manifested through framing, colours, light, a camera, a computer, paper and canvas. It’s the communication through technology of an idea in which is nested a small rectangular, two-dimensional scrap of a near-infinite world.

Its success or failure is not that it captures the moment, though it does, but that it communicates the photographer’s language of mind, his or her visual syntax. It’s as good as the idea that created it. Great photography is to snapshots what ballet is to skipping. It’s a conceptual language which demands an understanding of its grammar.

Where does that leave baboons? I’ve always detected in the gaze of a baboon a certain pleading to be understood, tinged with puzzled desperation at its failure to communicate. I’m beginning to understand why. DM/ ML