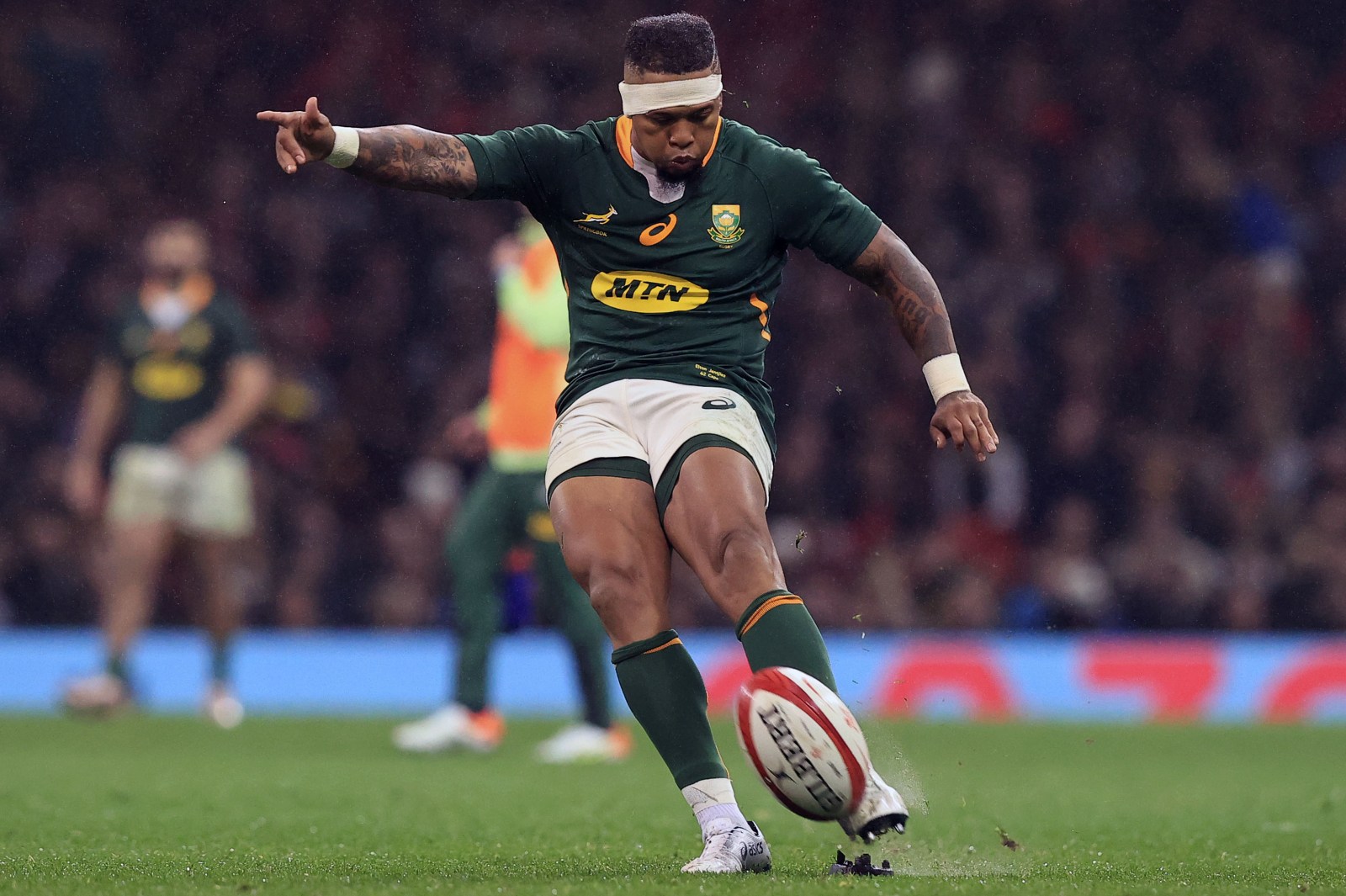 Elton Jantjies of South Africa takes a conversion kick during the Autumn Nations Series match between Wales and South Africa at Principality Stadium on 6 November, 2021 in Cardiff, Wales. (Photo by David Rogers/Getty Images)

The Springboks are expecting a tough battle against a confident Scotland Murrayfield on Saturday.

The last time Scotland fullback Stuart Hogg and wing Duhan van der Merwe played together against the Springboks, the pair endured a torrid time under an aerial assault.

It was the second Test of the series against the British & Irish Lions, which the Boks won 27-9, thanks largely to the tourists’ inability to cope with the Boks’ kicking game. Hogg lost his starting place for the deciding third Test as a consequence of that jittery outing, although Van der Merwe retained his as the Boks won the decider to clinch a 2-1 series win.

Hogg, who is a wonderful attacking fullback, was shackled by the Boks’ tactics and his own team instructions during the claustrophobic Lions series. On Saturday at Murrayfield, all indications are that Hogg, in full attack trim, will be unleashed on the unsuspecting tourists.

The weather forecast is for a dry day in Edinburgh, further pointing the needle towards an all-out attacking performance from a good Scotland team still glowing after beating Australia 15-13 last weekend.

The theory is sound and in Hogg and exciting flyhalf Finn Russell, Scotland certainly have the players to make life uncomfortable for the Boks.

But the home team will first have to deal with the Boks’ kicking game, their suffocating defence and their power forwards. Other than that, running the world champions ragged should be a breeze for Scotland.

That at least is the narrative that has been painted. The reality is that the contest will be more prosaic because Scotland coach Gregor Townsend is a wily operator.

He has first-hand experience of playing in South Africa and he has coached against them with Scotland and the Lions. He knows what is coming and is canny enough to know that ‘swinging the ball’ without first putting in some hard work, is rugby suicide.

He’ll also be mildly surprised to see Elton Jantjies starting at flyhalf for the Boks. The natural reaction to that selection is to imagine the classy flyhalf, who guided the Johannesburg-based Lions to three Super Rugby finals, running the ball at every opportunity.

Of course, it won’t happen quite that way. Jantjies will stick to the Bok blueprint, which is to create pressure through territory and contestable kicks, before searching for holes in the defensive line. His soft hands and ability to put runners into space is an ingredient the Boks could do with.

Last week they created enough pressure to score more tries against Wales but lacked the patience and skill to deliver the final pass. That’s where a confident Jantjies could excel.

“We only have a six-day turnaround (Scotland played Australia last Sunday) so we spent less time reviewing the match,” Townsend said. “We are very focused on the South Africa challenge and we’ve only had two training sessions this week.

“The Springboks are a group that know each other very well. They have a game plan that works for them and they have success with it. They are a very powerful team, which comes from the set piece, defence, kick/chase and their ball-carrying. It has worked for them in the past and continues to work for them, and we don’t expect it to change much. It is up to us to rise to the challenge.”

And for Scotland, Russell, who was excellent in the deciding third Test for the Lions in August, where his creativity caused some defensive uncertainty for the Boks, will also take pragmatic decisions before playing razzle-dazzle rugby.

“We’ve all seen what he (Russell) is capable of in the last Test against the British & Irish Lions — I really think he made a difference and challenged us in a different way,” Elton Jantjies said in the build-up to the match.

“So, yes, we’ve got a little bit of experience playing against him, but for us the focus will be on our own systems, working together as a group and making sure that we stop whatever is thrown at us. We looked at their past matches and last weekend’s game, but also at the way we play and how we can improve, and I believe we’re well prepared for Saturday.

“I know it sounds like a cliche, but I’ve always said it — it’s not about me as an individual, but rather about the team,” he said.

“Yes, there is a responsibility on me to lead the boys in terms of certain aspects of our game and execute and align in what we want to achieve and what we’ve been working on as a group.”

Lock Franco Mostert and wing Jesse Kriel will earn their 50th Test caps when the Springboks take to the field. Willie le Roux also returns to the starting team after sitting out against Wales last week.

Mostert comes in at lock and Elton Jantjies earns a run at flyhalf, with both Lood de Jager and Handré Pollard moving to the replacements bench.

Le Roux has been named to take over at fullback from Damian Willemse, who has to follow concussion return to play protocols, after taking a knock to the head last week.

The match will also be memorable for Steyn, who will edge Victor Matfield as the player with the longest Springbok career by becoming the first South African to play Test rugby over 15 calendar years, when he takes the field.

Matfield’s career spanned over 14 years and 122 days, while Steyn – who has been on the winning side in 55 of his 72 Tests and scored 144 points – is in line to increase that mark to 15 years and two days on Saturday.

“Scotland will be a force at Murrayfield, so it was important for us to maintain continuity within our squad, while at the same time celebrating Jesse and Franco’s 50th caps and giving Elton a chance to start,” said Bok coach Jacques Nienaber.

“Elton has been training very well since the squad assembled before the Lions Series and he’s performed well every time he earned a run, so we thought it was the right time to hand him a start.” DM