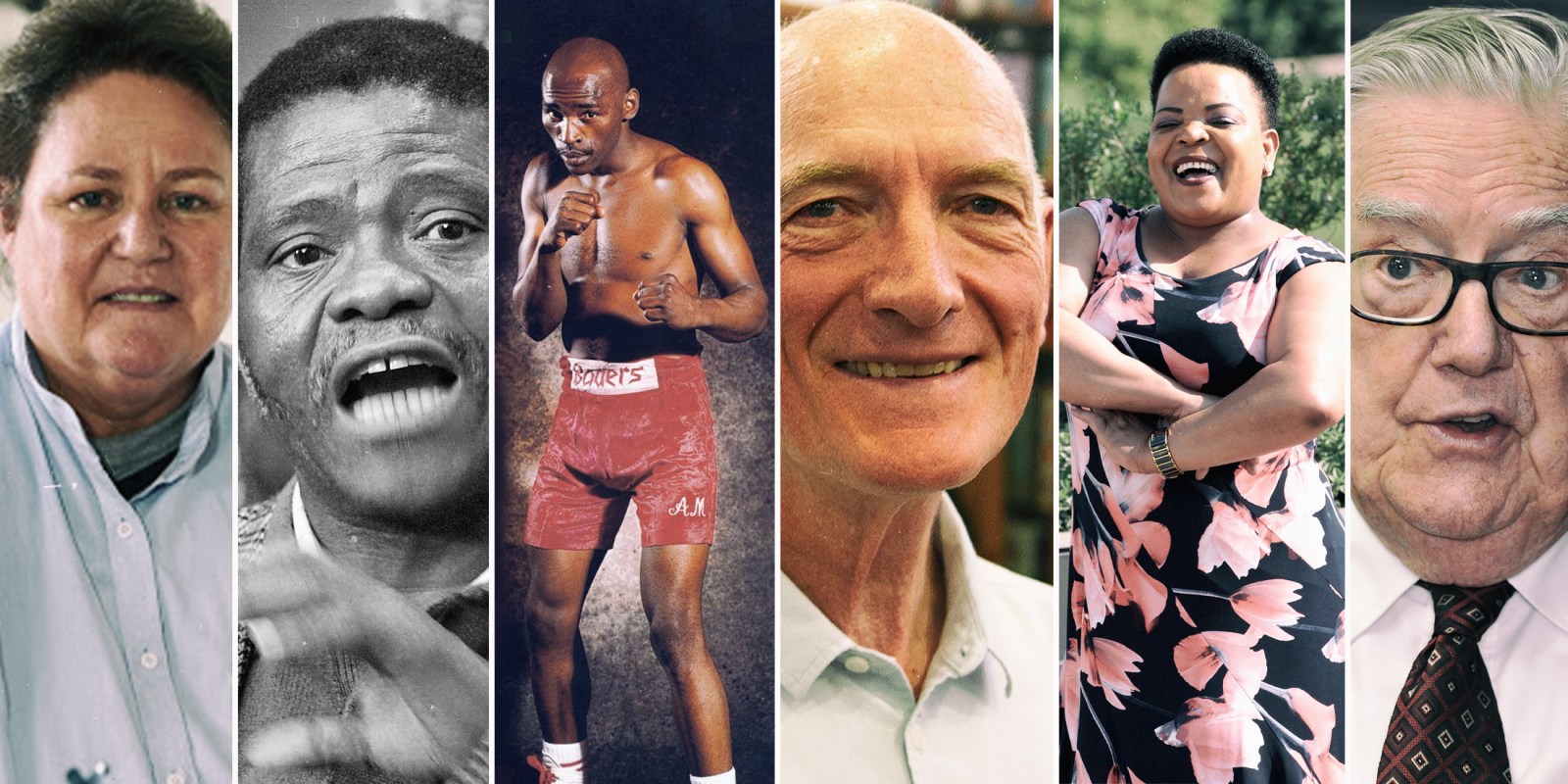 Liberation fighters, young people, health and educational researchers, foreigners, a people’s doctor, a boxing champion and a reverend aboard the ill-fated SS Mendi are among this year’s recipients – some posthumously – of National Orders which will be handed out next week.

On Wednesday the Presidency announced the names of prominent South Africans who will receive National Orders at a ceremony on 18 November. Director-General in the Presidency Phindile Baleni said these are the highest awards the country bestows on citizens and foreigners who have “contributed towards the advancement of democracy and have made a significant impact on improving the lives of South Africans”.

Baleni, the chancellor of the orders, said in a statement that the orders recognised contributions made by individuals “towards building a non-racial, non-sexist, democratic and prosperous South Africa as envisaged in our Constitution”.

In the Order of the Baobab, one of the highest orders accorded to South Africans who have contributed to community service, Gold will be awarded to Justice Edwin Cameron. It is given to the prolific justice for his contribution to the judicial system, as well as his “tireless campaigning against the stigma of HIV and AIDS, and the rights of lesbian, gay, bisexual, transgender, queer, intersex and asexual (LGBTQIA+) communities”. Cameron was previously a justice of the Constitutional Court and is currently the Inspecting Judge of Correctional Services.

Professor Lynette Denny, a leading obstetrician and cervical cancer researcher, will receive the order in Silver. She is also instrumental in the development of the Human Papillomavirus (HPV) vaccine, which has already been administered to two million schoolgirls in South Africa. It has been found to reduce cervical cancer by up to 90%.

David Ingpen and Nolwandle Mboweni have also been granted the Silver order – Ingpen for his contribution to educating young people about maritime studies, while businesswoman Mboweni is recognised for her work in education and business.

Lecturer at the University of the Free State, Dr Hlamalani Judith Ngwenya, is being honoured for her work in sustainable agriculture and community empowerment.

Some of the individuals recognised by the government will be handed the awards posthumously.

Order of the Mendi for Bravery – given to citizens who have performed acts of bravery – will be given in Gold to Gcinisizwe Khwezi Sylvester Kondile posthumously for “his ultimate sacrifice to the liberation of South Africa… he endured unspeakable torture and cruelty, refusing to betray his comrades right to the victorious end of his life”.

Another posthumous Gold recipient is Reverend Isaac William Dyoba Wauchope for “providing morale through poignant words and support in the darkest hour of soldiers who died in the sinking of the SS Mendi”.

The Order of the Mendi for Bravery will be bestowed in Silver upon Chand Basson and Roydon Olckers, in Silver. Basson will receive the Order for “his ultimate sacrifice of saving lives from certain death and taking a stray bullet shielding a stranger from a gang”. In 2018, 19-year-old Basson was caught in the crossfire of a gun battle between gangs in Mitchells Plain. Olckers was one of four children killed after a walkway collapsed at Hoërskool Driehoek in Vanderbijlpark on 1 February 2019. The Order has been given for “courageously saving the lives of two learners and sacrificing his own”.

The Order of Ikhamanga is given to South Africans who have excelled in the fields of arts, culture, literature, music, journalism and sports.

The Order in Gold has been awarded to journalist Dr Raymond Louw, former editor of the Rand Daily Mail during the era of apartheid prime minister John Vorster. He used his pen “as his weapon to expose lies and shine the light on the atrocities of apartheid”. Louw remained a lifelong campaigner for media freedom, and died at the age of 92 in June 2019.

Dr David Maphalla, a Sesotho wordsmith who has published more than 70 books in the language, will also be honoured with a Gold Order. Writer, author and poet, Professor Sibusiso Cyril Nyembezi, has been bestowed with the award posthumously for his contribution to the scholarship and lexicon of the isiZulu language. Dr Bhekizizwe Joseph Shabalala, member of the Grammy-winning group Ladysmith Black Mambazo, will receive the award posthumously for his “exceptional” contribution to the promotion of African Isicathamiya music.

Read in Drum: Dr Rebecca Malope on life after retirement and her advice to upcoming artists

Boxing legend Arthur Mayisela will be posthumously honoured for his “skilful and entertaining boxing acumen”. Mayisela, known as the “Fighting Prince”, is the only sports personality honoured this year. The famous champion from Soweto died in a car accident on the M2 highway in 1986, at the age of 32

The Order of Luthuli is bestowed on South Africans who have contributed to the struggle for democracy, nation-building, building democracy and human rights, justice and peace as well as for the resolution of conflict.

In Gold, the Order is bestowed posthumously to Thomas Manthata and Bertha Mkhize. Former South African Human Rights Commissioner Manthata, who was active in the anti-apartheid United Democratic Front, died in 2020 following Covid-19 complications. He is recognised for his participation in human rights matters, from rights of the elderly and land issues to traditional leadership. Mkhize, a teacher by trade who was part of the 1925 Defiance Campaign in Durban, is honoured for her contribution to South Africa’s liberation. In 1956, Mkhize was president of the African National Congress Women’s League. After being introduced to the Baháʼí faith, she spent her time translating books into isiZulu.

In Silver, the Order is awarded posthumously to Dr Abu Baker Asvat, the “People’s Doctor” who generously provided medical care to the poor and freedom fighters. The Order is also conferred on anti-apartheid activists Audrey and Max Coleman, for their contributions to the fight for liberation, and promotion of human rights through active involvement in lobbying using both civic organisations and government institutions. Audrey Coleman was secretary of the Black Sash as well as a member of the Detainees Parents Support Committee after her and Max’s sons were arrested and detained. Businessman Max Coleman was also part of the committee and later became a human rights commissioner.

Late activist and businessman Zazi Kuzwayo and political prisoner and activist Nikiwe Matshoba are also honoured with the Order. Cikizwa Constance Maqungu is honoured for “her brave stand against injustice, she withstood torture and refused to turn state witness”. Eastern Cape-born businesswoman Laura Mphahlwa, affectionately known as “Aunt Laura”, has been honoured posthumously for her contributions to the liberation movement, black business development and the nursing profession. City of Johannesburg councillor and former detainee Hilda Mally Mokoena has also been honoured for her contribution to South Africa’s liberation struggle.

The Order of Companions of OR Tambo is given to eminent foreigners for friendship shown to South Africa. In Silver, it has been bestowed upon Anthony Dykes (UK), Dr Dail Gerhart (US), Juergen Leihos (Germany) and Malin Sellman (Sweden).

The Orders will be bestowed on Thursday, 18 November, said the Presidency. DM