Amid the urban decay, inner-city voters make their mark with little hope of change 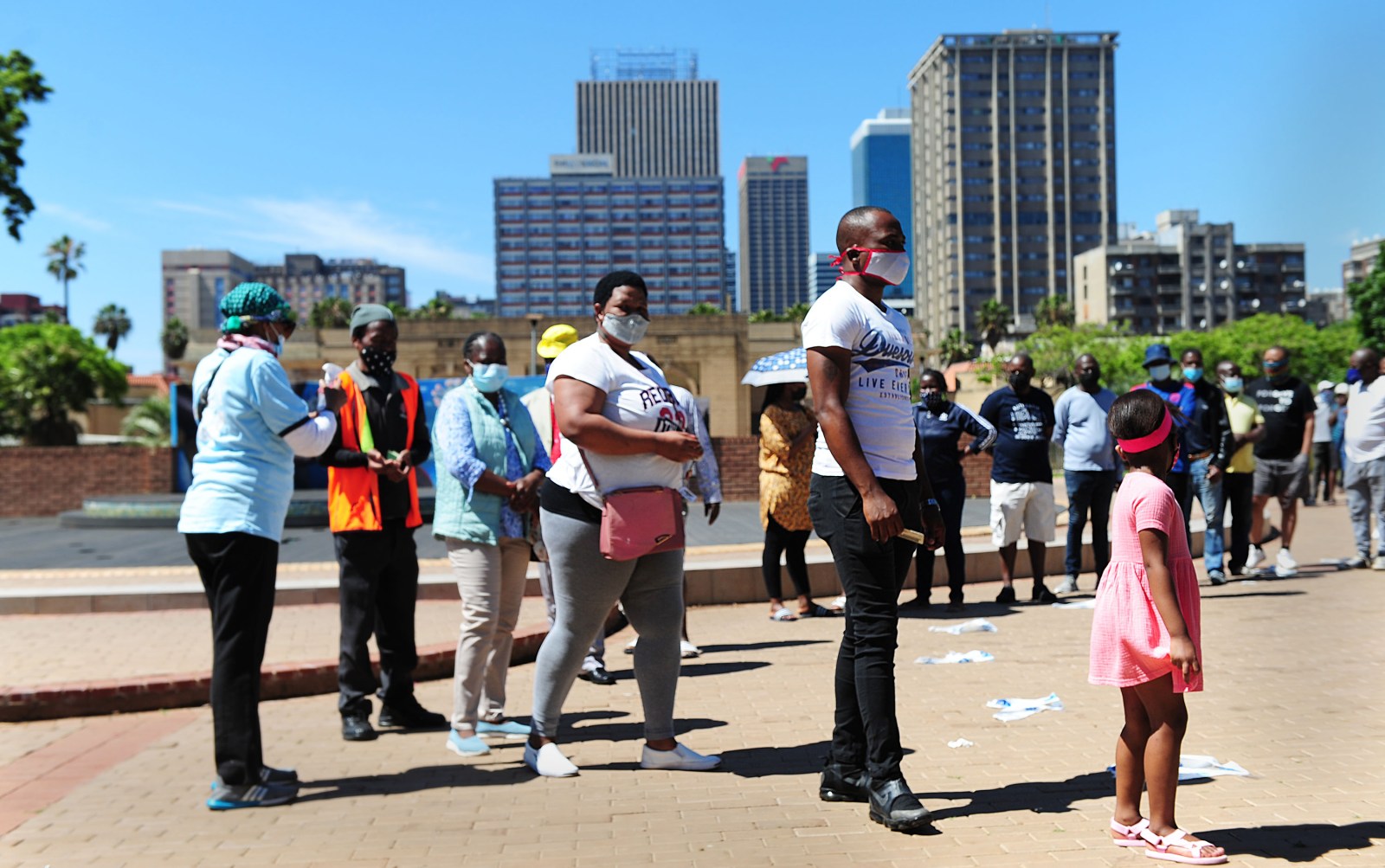 Joburg’s inner-city voters haven’t stopped asking for the same things from politicians. They were back in the queues again this election day, but making crosses more by rote than with hope.

The 27-year-old gives an ironic chuckle at the mention that he is one of Nelson Mandela’s “born-frees”.

“I voted today just because sometimes they say if you don’t vote then you won’t get this or that. There are two parties here at Kwa Mai Mai and they’re pushing,” he says, of the politicking at the voting station at the traditional healers’ market in Joburg’s inner city. The market is where his small workshop and business are based and where he lives.

Mjiyakho and his 30-year-old brother Nkululeko took over the business when their father died six years ago. He says it’s been hard to stay afloat.

“The problem here is that this market was for business, but people are also living here now. There are many children running around and if they damage my things I can’t shout at them and it’s not easy for customers when there are children running all over,” he says, pausing between punching nails into a coffin he hopes to sell for R1,500.

The council pumped R3.2-million into the market about four years ago, but without maintenance, general upkeep or enforcement of lease agreements the market storerooms are now homes and many makeshift rooms fashioned from plywood and pieces of recycled steel have been tacked on to workshop spaces. Cars that have seen better days stand on bricks behind strands of rusted barbed wire. Drying laundry drips alongside goods for sale. The public toilets, never intended for washing or showering, are now the only place to get some water on skin for the dozens of people who live in a city where decent low-income housing needs have fallen off the radar.

On election day, there’s a pile of broken toilets and basins stacked up against a wall in the market. Reeking drains clogged with litter double as playgrounds for children.

“It’s not easy because you can’t even find partners to do business with because people don’t take you seriously. But every time we just vote, even though we know we won’t get any help for businesses like ours to grow,” Mjiyakho says.

For the Mjiyakho brothers, like many other traders in the market, election day is a working day. But because they share the space with those who don’t work, election day is, for some, also a party day holiday. Teenagers gather in the market, puffing on hubbly bubblies and sharing swigs from quarts before 10am.

By midday, the joke in the voting queue is that voting is “eating into drinking time”. But the Kwa Mai Mai market voting station hasn’t seen a high turnout, with no more than four or five people in the queue at any time.

It’s quiet at the Joubert Park voting marquees too. About 20 or 30 people form a short, socially distanced human snake alongside the McFarlane Fountain.

The park is hemmed in by the inner city’s high-rises and is traditionally one of the busiest voting stations in the country, matching the high density of the area adjacent to this green lung at the foot of the Hillbrow sprawl.

Joubert Park traces its origins back to 1887, just one year after Joburg was proclaimed a city. It’s always doubled as an election site in the democratic era and as a place for the homeless to sleep off rough nights and to find salvageable crumbs in the dustbins. This time round it’s also been a venue for a pop-up Covid-19 vaccination site, but there aren’t many takers for the jab.

Nomsa Dube, who has lived in the Joubert Park precinct for 10 years, says her half-hour wait in the queue didn’t bother her.

“It went very smoothly,” she says, sitting down on one of the concrete benches in the park after casting her vote, to check her phone.

“It is the criminals and nyaope smokers here that worry me the most.”

Safety, crime and jobs are concerns of Nhlanhla Basani (40), who has lived on Wolmarans Street for 10 years. He arrived in the election queue with his four-year-old daughter Akabongwe.

“If she’s not at school, then she’s with me because it’s not safe here for her — she must always be with me,” the protective dad says.

He’s a security guard — it’s a tough job, Basani says, but he has little choice because jobs are scarce.

“There is all this crime because there aren’t jobs for people, but where do I start about what’s wrong here — there’s too much,” he says.

Basani is turned away from the Joubert Park voting station and sent to a polling station on Loveday Street. He says maybe his online registration was the reason, even though he lives a few hundred metres from the park.

He’s not deterred. “I’m going to go there now to Loveday Street because I always vote each and every election; I believe it’s what we have to do,” he says.

His walk towards Loveday Street would tell a sorry tale of a city of gold that has been more gold dust and fable in the past years. It’s had two mayors die within months of each other this year and its history of coalitions in power has stalled decision-making and made horse-trading and politicking stand in for effective running of the engine room of the province.

For Basani, those few kilometres to his polling station involve a walk past piles of refuse growing like urban monuments on pavements. Double-parked taxis block roads and cars make illegal U-turns or speed through intersections where traffic lights haven’t worked in months, as metro police watch. The roads are pockmarked with potholes and dug-up sections have not seen tar for months.

Basani’s walk will have taken him past pavements in Hillbrow where before Covid-19 church services spilled over, with congregants illegally closing off roads and moving booming speakers on to pavements.

His route is devoid of IEC posters. Election posters of political parties jostle for ascendancy on street lights, but IEC information boards or direction markers to polling booths in the inner city are noticeably absent.

It’s deathly quiet even at the election station in the heart of the city: the Joburg City Hall on Helen Joseph Street. There are seven or eight people on the steps waiting to clear a metal detector to get their ID and voters’ roll registrations checked.

One of those waiting is Amo Goannwe (28), who has lived in the inner city for three years.

“It’s general service delivery that I’m voting for — the electricity goes out all the time, there’s litter everywhere, it’s so dirty and the drains are overflowing.

“As a woman, I also don’t feel safe here either. I work in Marshalltown so I always make sure that I leave by 5pm so that I can walk home before dark — I never go out after 6pm,” she says with a shrug.

Her voting station — City Hall — used to be part of the city’s thriving nightlife. The organ pipes inside the hall still rise majestically at the back of a stage illuminated by hanging pendant lights. On election day they form a backdrop for the silent shuffle of voters taking their turn at the cardboard booths, ticking their wishes and hopes with an X on a piece of paper. But the organ has not worked for years. The City Hall clock is stuck at 6.35.

A broken clock, they say, is correct twice a day, but a city that hasn’t seen good days for a long time is demanding that politicians do better. DM