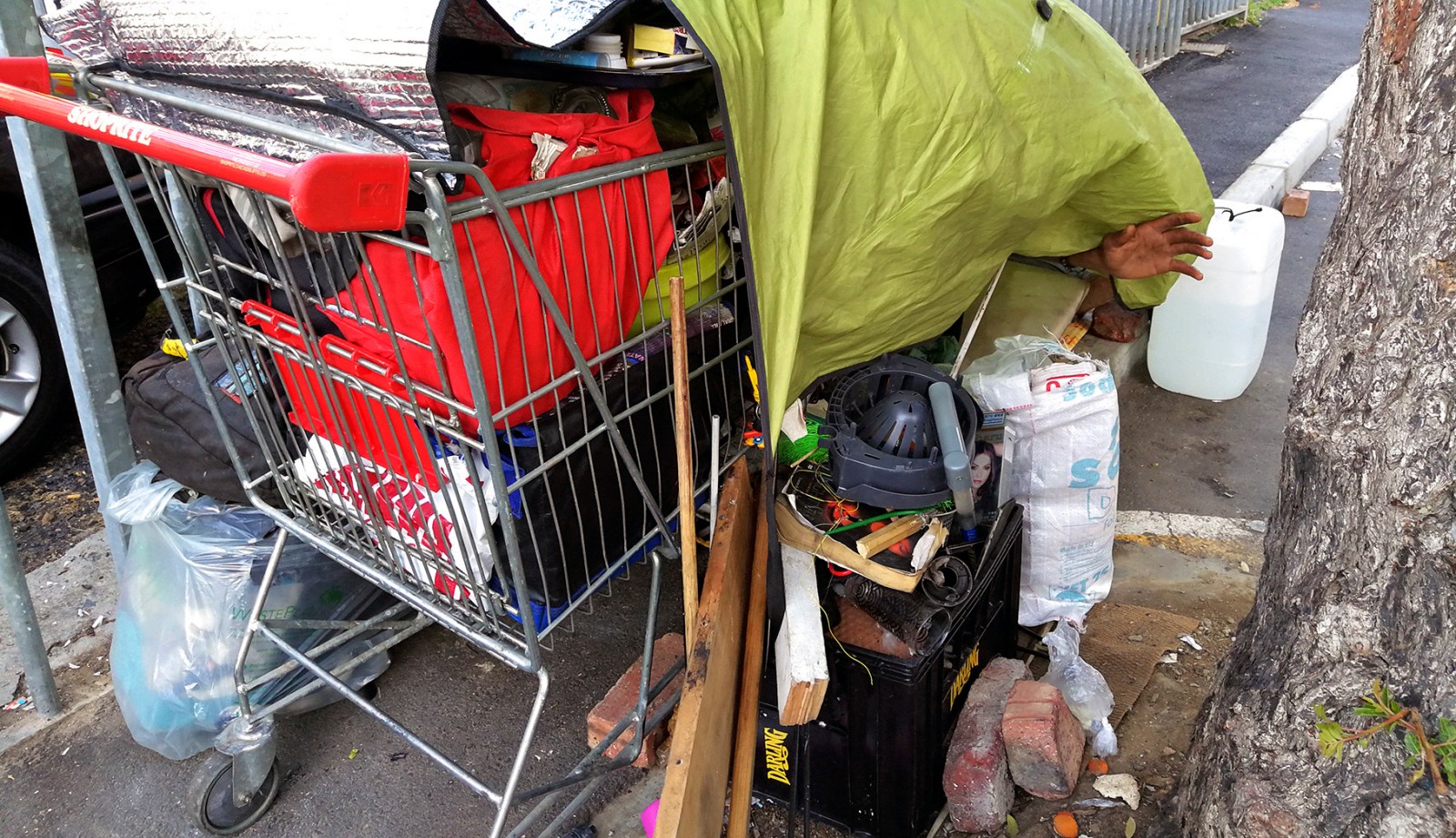 Homelessness in my neighbourhood, as in many parts of the world, is part of life. A homeless man’s setup, with his hand poking out from under his makeshift shelter, Sea Point, Cape Town. (Photo: Trevor Sacks)

In the battle for Sea Point in Cape Town, the Good party’s candidate, Carlos Mesquita, knows a thing or two about homelessness. Knowing first-hand the daily struggles and motivations of homeless people is an advantage he has over the other candidates. But more than that, he has an approach to dealing with homelessness that’s more comprehensive, more rational and more humane.

You won’t see Carlos Filipe Mesquita’s face on a Good party street-pole poster in Sea Point. Notwithstanding the cringey boxing theme of Good’s ad campaign (as it appears in other suburbs) and the questionable legacy of the party’s leader, it’s a bad thing for Sea Point that more people don’t know he’s running.

Look down Main Road in Sea Point and, instead, you’ll see posters featuring the DA’s Nicola Jowell and the Freedom Front Plus’ new recruit, Paul Jacobson.

Look up a side street and you’re likely to see a few homeless people huddled against cardboard and plastic hoards or inside a dishevelled camping tent.

Homelessness in my neighbourhood, as in many parts of the world, is part of life. For the three candidates, it’s an issue central to their campaigns, though their approaches couldn’t be more different.

Jacobson has built a reputation for himself as a neighbourhood bully, accused of intimidating people who show sympathy for homeless people. He was quoted in a recent Cape Argus article as saying: “I am not anti-poor, I want to assist them but homeless people cannot be allowed to vote in local government…”

Jowell must feel she’s in an awkward position. She seems to have a more empathic attitude. She certainly respects the law. The problem is the law, though – at least, in the form of the recent by-law passed by the DA-run Cape Town City Council, condemned by the South African Human Rights Commission, that makes it easy to forcibly remove people from the streets and arrest those who refuse “alternative shelter”. In a city with an estimated 14,000 homeless people and only about 2,500 shelter beds, it’s not clear if the City has an alternative to the alternative shelters that they’re just not telling anyone about.

Certainly, the City’s record on alternative shelter doesn’t look good. It moved more than 1,000 homeless people to marquee tents at a site in Strandfontein during the Covid-19 lockdowns in 2020, with no physical distancing measures, little sanitation, little support for physical or mental health conditions, and little regard for gender safety or the potential spread of TB in such close quarters.

The guy without a campaign poster, Mesquita, knows a thing or two about homelessness. In fact, he was housed at the Strandfontein site, describing it as the worst experience of his life.

Knowing first-hand the daily struggles and motivations of homeless people is certainly an advantage he has over the other candidates. But more than that, he has an approach to dealing with homelessness that’s more comprehensive, more rational and more humane.

It’s an issue he writes about regularly in a newspaper column, and in his roles in the Strandfontein Housing Action Committee (SHAC) and the Rehoming Collective NPO, he’s working daily to move homeless people off the street. He also founded and manages Our House, which provides supportive transitional accommodation for homeless people in the city.

No other candidate on the street poles of Sea Point has the experience, ideas or empathy to match.

If Sea Point businessmen and housed residents want homeless people off the street, the answer is simple: provide homes. Poverty is not going away anytime soon, unless the national government stops vacillating and decrees a Basic Income Guarantee at a rate that lifts people out of it. Even so, many of the people on the street will require extra help with health, substance use and vocational support.

We know that harm reduction is the approach that works for substance use problems – that’s what the World Health Organization and the UN Office on Drugs and Crime recommend, based on scientific evidence. Likewise, we have well-researched, humane, effective approaches to alleviate homelessness that don’t turn neighbours into bullies and don’t rely on law enforcement to implement forced removals.

There are perhaps 800 homeless people living in Sea Point, with some residing in the suburb for longer than many of those with homes, or with Airbnb properties. Who knows whether they’ll vote, or if they’re even registered, but they could do worse than having Carlos in their corner. But the same goes for those housed voters in the suburb – nobody wants people living on the street; how we go about making that a reality is, at least partly, going to be borne out by the election results.

Two of the candidates will continue to regard homeless people as eyesores and nuisances, or characterise any person living on the street as a danger, and forcibly remove them to inhospitable locations away from the city, with no opportunities, support or hope. Mesquita’s approach, by contrast, is an opportunity for Sea Point – and greater Cape Town – to do something new, to lift people off the street, into a home and onto their own two feet. DM/MC

Trevor Sacks is a writer whose work has appeared in n+1, The New York Times and Sports Illustrated. His novel, Lucky Packet, won the Herman Charles Bosman Prize and SALA First-Time Published Author Award. He lives in Sea Point.