Proteas on the back foot after porous batting in T20 Wo... 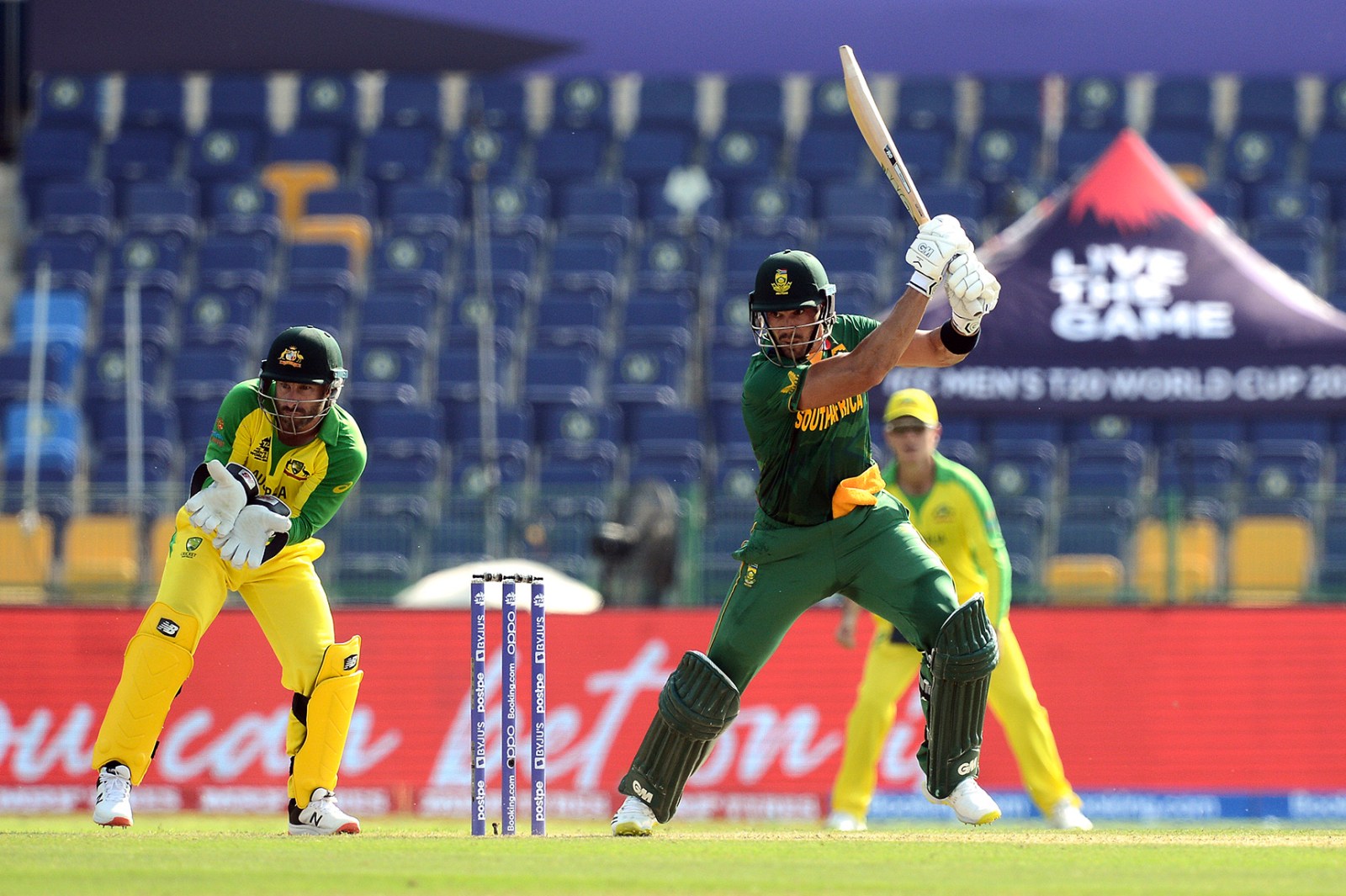 Aiden Markram of the Proteas plays a shot on his way to top-score for his team with 40 runs off 36 balls during the 2021 ICC T20 World Cup match against Australia at Sheikh Zayed Stadium on 23 October 2021 in Abu Dhabi, United Arab Emirates. (Photo: Isuru Sameera Peiris / Gallo Images)

There was a distinctly familiar feeling as the Proteas lost a tight match to Australia in their T20 World Cup opener, although narrow losses are usually reserved for later in World Cup tournaments.

South Africa’s five-wicket loss to Australia in their T20 World Cup opening match was a thriller in the end, but exposed the team’s imbalance and porous batting.

The five-wicket defeat has already put the Proteas in a precarious position in a group containing One-Day International world champions England, defending champions the West Indies, Sri Lanka and Bangladesh.

South Africa’s bowling was good and their recently maligned fielding excellent, which gave them an improbable sniff of victory despite defending a paltry 118.

In the end it wasn’t enough, but it took the Aussies until the fourth ball of the final over to hit the winning runs. The only real surprise was that it took as long as it did for Australia to confirm victory after the Proteas’ batting wilted, but that was testament to an excellent display in the field.

Shamsi became the third Proteas’ player after Dale Steyn and Imran Tahir to take 50 T2oI wickets. South Africa’s bowling attack could take them far, but the men with the willow will have to step up, otherwise this campaign will end in tears — again.

“Shamsi has been a massive performer for us in the last while,” said captain Temba Bavuma after the match.

“It’s not by accident that he’s the No 1 T20 bowler in the world, and we lean a lot on him in our attack in terms of taking wickets and controlling the middle phase and today he did exactly that.

“He’s an attacking option for us, and I think a good foil with Keshav [Maharaj].”

But with almost no runs on the board, it was always an impossible task for the bowlers to defend the score. And it begs the question of how this team can go deep in the tournament without consistent batting performances. The answer is self-evident — they can’t, unless there is a vast and immediate improvement.

That Australia only knocked off the paltry 119 for victory in the final over underlined South Africa’s competitiveness and ability to fight, but it doesn’t mask the fragile batting shortcomings.

Coach Mark Boucher banked on six specialist batters at the top of the order and only Markram delivered, with 40 off 36 balls. David Miller was next best with 16 and Bavuma scored 12. By contrast, Australia’s batting unit almost all contributed to the, admittedly, low run chase.

The Proteas T20 form has been good going into the tournament, but this is the most pressure they’ve faced since the 50-over World Cup more than two years ago, and the batters failed to respond.

“The guys have prepared quite well in terms of trying to deal with mental pressures,” Bavuma said after the game. “I can’t remember a time when our batting has collapsed like that. It’s not every day when your top seven, bar Aiden [Markram], all fail. It was an execution thing.

“A total of 118 was definitely not a par score. Anything around 150-160 would have been competitive.

“I thought the bowlers bowled quite well. There’s no one I can fault today in the bowling. So if you are selecting six batters with an all-around at seven, and you are scoring 118, then I don’t think you can exactly blame the plan.

“I think from a batting point of view, we know that there’s a lot that we could have done and we will be looking to correct our wrongs in the next game.

“We always talk about us being resilient and there was opportunity. It was a big effort from the guys to get us to the last over. We just didn’t get enough with the bat and it was always going to be tough for the bowlers.

“Australia bowled well. They assessed the length well and hit that back of a length. Their spinners also bowled tight. Aiden held the innings and got us to a decent total. As much as it was a day that didn’t go to plan, we can take positives. We showed fight. We spoke during the halftime that we won’t give up.”

With only two teams from each group advancing to the semifinals, Australia, England and Sri Lanka, who won their opening matches in Group 1, are fastest out of the gate. The Proteas are already on the back foot, one match into the tournament.

South Africa’s clash against the West Indies on Tuesday already has the feel of a knockout clash for both teams because a second defeat will almost certainly leave too much to do to make the semis.

That fight will be vital to stay alive in the tournament, but it’s going to have to be backed up by skills and execution, especially from the batting unit. DM