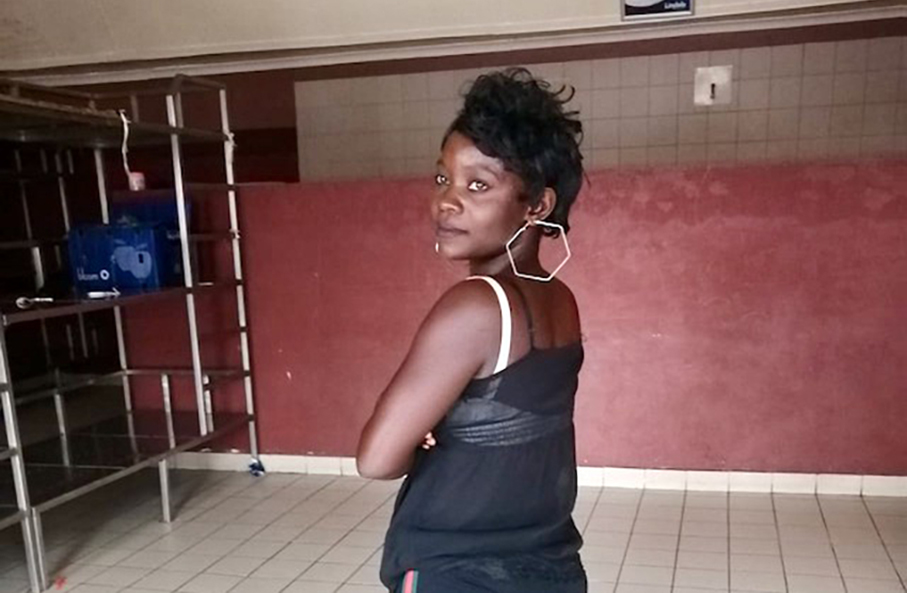 Aline Mauwa in the Lindela Repatriation Centre in Krugersdorp. (Photo: Supplied by GroundUp)

Over 100 refugees stuck in limbo for two years at Lindela Repatriation Centre.

About 104 refugees, who protested to demand that the United Nations High Commissioner for Refugees (UNHCR) settle them in any country other than South Africa or the country they fled, have been stuck in the Lindela Repatriation Centre in Krugersdorp since November 2019.

The 104 refugees were part of the Pretoria “UNHCR protest”. Refugees also protested in central Cape Town. After many months of protest, they were moved to camps in Wingfield and Bellville when the Covid-19 pandemic hit.

Refugees cannot be deported against their will back to the countries they fled, and the group refuses to go back to communities in South Africa.

However, about 41 of the Cape Town protesters, including protest leaders Aline Bukuru and Papy Sukami, were deported in April from Lindela.

About 800 people have moved back to South African communities. Of the Pretoria protesters, only 35 accepted reintegration. Many still want to leave South Africa.

UNHCR offered assistance of three months’ rental and food if people chose to reintegrate, and a plane ticket to those who wished to return to their country of origin.

From the onset of the protest, both the Department of Home Affairs (DHA) and the UNHCR told the protesters their demand was unrealistic.

“Resettlement to a third country is a very limited option for refugees worldwide, which in 2020 covered less than 1% of the global refugee population … subject to small quotas offered by receiving countries,” the UNHCR said.

As a result, the Pretoria refugees have spent nearly two years at Lindela.

On 9 October, one of their group, Aline Mauwa, died.

In a strongly-worded statement on 12 October, Women and Children at Concern (WCC), an international human rights organisation, blamed xenophobia and South Africa’s neglectful immigration bureaucracy for Mauwa’s predicament (living in limbo in Lindela) and pointed a finger at Lindela, alleging Mauwa was denied proper health care.

Mauwa, 26, originally from the Eastern Kivu, is survived by her husband and three children. She had been living in South Africa since 2015.

Theresa Waku, who was part of the UNHCR protest and is currently living in Lindela, said the husband “has no strength to speak”.

She said the deceased had hypertension and ran out of medication.

“She sought help at the clinic here in Lindela and she was told by the clinic nurses to go and drink water. Her nose started bleeding,” Waku says. “She collapsed, then we took her to the gate. We poured water on her and she appeared to have come back to life but she was struggling to breathe.”

Waku says the food is meagre and the health care is poor. Lindela and its clinic is for detainees awaiting deportation and the refugees living there are resented, she said. “I am told, you are smelling, go back to the community … We have a tough life here in Lindela.”

The facility is run by the DHA and contracted out to a company called EnviroMongz.

Siyabulela Qoza, spokesperson for the DHA, told GroundUp in June that “the department has maintained detention in accordance with the UN minimum detention standards. The department said Lindela can hold 4,000 detainees. In June it had a thousand.

In a statement on 13 October, the DHA said the WCC statement contained deliberate misrepresentation of facts.

“Lindela and the clinic inside it is run by full-time medical and nursing staff and has been subject to several oversight visits by different institutions. For example, the Parliamentary Portfolio Committee on Home Affairs visited Lindela on 11 May 2020. In addition, the SA Human Rights Commission visited the facility on 29 September 2021.”

​​Dr Kwanele Pakati from the National Preventative Mechanism established by the state under the United Nations Convention against Torture and Other Cruel, Inhuman or Degrading Treatment or Punishment, said that under the auspices of the SAHRC it had conducted three visits.

“The refugees and asylum seekers are free to leave at will for various reasons such as voluntary reintegration and seeking medical attention at the nearest public health facilities, as they are not detained for violating immigration laws,” said Pakati.

“The SAHRC was notified of the passing of Ms Mauwa by the Department and the relevant officials are investigating the circumstances surrounding Ms Mauwa’s passing. The SAHRC sends its heartfelt condolences to the family and friends of the late Ms Mauwa.”

The UNHCR also said it regrets the passing away of Mauwa. Its spokesperson Buchizya Mseteka said, “Whenever a refugee dies, UNHCR takes all necessary measures to get to the bottom of it. It is the expectation of UNHCR that the government through DHA will carry out a full inquiry into her death. It is a standard practice for UNHCR and its partners to offer solidarity and needs-based assistance to bereaved families in difficult and unfortunate circumstances.”

Mseteka said, “These people are not detained. They have continued to stay at Lindela on their own volition … despite a cash offer of reintegration and case management assistance offered by UNHCR to facilitate their exit from Lindela, promote self-sufficiency and facilitate reintegration back into host communities.”

Waku said returning to the South African community is unthinkable for her. Her husband had been running a car workshop. In 2014 during a protest 26 cars, including their family car, were burnt down. Her husband has since been murdered. DM