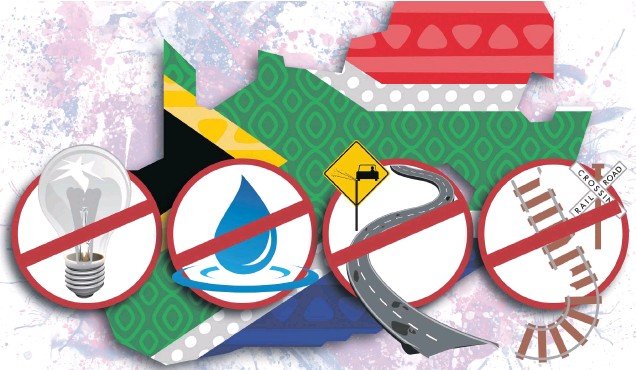 Inconsistent application of economic policy has long been a constraint to growth in SA. As politicians manipulate citizens and unemployment rises, the policy debate is becoming more polarising. But sometimes it’s not about the policy. Get the basics right and the economy will grow.

It is a cliché, but South Africa is a country of massive opportunity. With vast mineral wealth, natural beauty and a youthful population, her resources are there to be carefully exploited and managed for the benefit of all.

Yet the reverse is happening. In front of our very eyes, and at an accelerating pace, the infrastructure that is required not just to maintain but also to grow South Africa’s economy is collapsing or has already collapsed.

To run a functioning economy, a few basics are required: the lights need to be on, water needs to flow, people need to be able to get to work, and goods need to be delivered. This is not happening, regardless of policy.

The situation is most dire at a basic infrastructure level. Municipalities, responsible for the provision of basic services to citizens – water, sanitation, housing and power – are utterly broken. In its State of the Government report submitted to Cabinet in August, the Department of Cooperative Governance and Traditional Affairs categorised just 16 out of 257 municipalities in SA as “stable”. Raw sewage runs through the streets of townships and into rivers, polluting waterways and spreading disease. Streetlights don’t work, enabling criminals, and streets are disintegrating, congesting traffic and adding to vehicle maintenance costs.

Yet service delivery at this most basic level is vital if South Africa wants to broaden economic participation and reverse its unemployment trend, says the Bureau for Economic Research in a recent report on the state of SA’s municipalities. “To achieve these objectives, it is necessary to strengthen municipal finances and investment, with merit-based appointments and good municipal governance as a prerequisite.”

It is not just communities that suffer, but businesses too. In April 2021, poultry producer Astral Foods obtained an order from the high court against the Lekwa Municipality in Mpumalanga for its failure to provide basic service delivery in line with its constitutional obligations, and in June Clover announced it was relocating its Lichtenburg factory to Durban because the Ditsobotla Municipality could not deliver basic services.

This raises the cost of doing business and leads directly to job losses.

It is not just the municipalities that are broken; South Africa’s utilities are too. Eskom, which supplies 95% of South Africa’s power, has implemented stage 4 load shedding, despite its best efforts to keep the lights on. As Daily Maverick’s Ferial Haffajee pointed out this week, in Johannesburg alone there are 421 power cuts a day. And yet the Department of Mineral Resources and Energy cannot fully release the handbrake holding back the development of a vibrant renewable energy sector whose economic multipliers are orders of magnitude more than those of the fossil-fuel economy. This is something that even Eskom supports.

Many of the 13 state-owned Water Boards that manage the country’s water supply and sanitation, including Amatola, Sedibeng, Lepelle, Magalies and Umgeni, are completely dysfunctional, largely thanks to the overt influence of politics and politicians who seem to have forgotten that access to potable water is a basic human right. The Amatola Water Board is so inept it cannot kick-start a project that is 94% complete, and in so doing avert Day Zero in the Nelson Mandela Bay (NMB) Metro. Trying to persuade companies to invest in NMB is impossible under these circumstances. It is an opportunity missed given the post-lockdown trend that is seeing people and businesses relocate to smaller urban centres.

Passenger and freight rail services are in disarray. Investor Warren Buffett was once asked which economic indicator he would choose if he had to rely on just one set of economic statistics. He picked freight rail traffic. Imagine what he would say if he knew there were just two container trains a day, running in each direction, between Durban and Johannesburg. That’s four trains. On South Africa’s busiest freight corridor.

“What we move is the economy. It’s the tangible economy,” Ian Jefferies, CEO of the Association of American Railroads, once said.

“And so as the economy goes, rail goes. So when rail is doing well, it usually means the economy is running pretty strong.”

Passenger rail is irreparably broken, and soon freight will be too.

As for telecommunications, which is unquestionably an economic enabler, the picture is better, but not great. A 2018 study by Pew Research Center puts mobile access penetration in South Africa at 95% and smartphone penetration at 91.2%. However, high data costs continue to hamstring use. New spectrum resources have not been issued for more than 15 years, for which much blame can be laid at the feet of former communications ministers who have bungled the process, costing South Africa’s economy dearly. “Delays in allocating spectrum for the roll-out of 5G wireless broadband in SA also mean delays in reaping massive benefits,” says Arthur Goldstuck, CEO of World Wide Worx.

There has been a lot of hype about 5G networks and their potential to enable the Fourth Industrial Revolution,  and it’s well deserved. With faster data speeds and other tech benefits, 5G will become a foundation for innovation, transforming many sectors of our economy – starting with health and education – and creating industries not imagined today. Falling behind in this regard has long-lasting economic implications for SA.

Regarding national government departments, delivery failures read like a litany, but it becomes more alarming when they fail to get even the small things right: Home Affairs, for instance, is still reviewing SA’s work permit system and critical skills list for foreigners. This is despite a list of critical skills being published for comment in February this year.

In recent weeks Statistics South Africa has twice delayed the publication of economic data because the relevant departments have been unable to pass on what should be routine data. In the case of the Department of Mineral Resources and Energy, it was mining data used in the calculation of GDP growth; and in the case of the Justice Department it was stats on civil cases for debt, a key indicator of consumer and small-business health.

So yes, we can debate austerity, and the basic income grant, and how to enable the just transition, but what we need is growth. And enabling growth is not difficult – get the basics of service delivery right, for a start. After that, we can talk. DM168