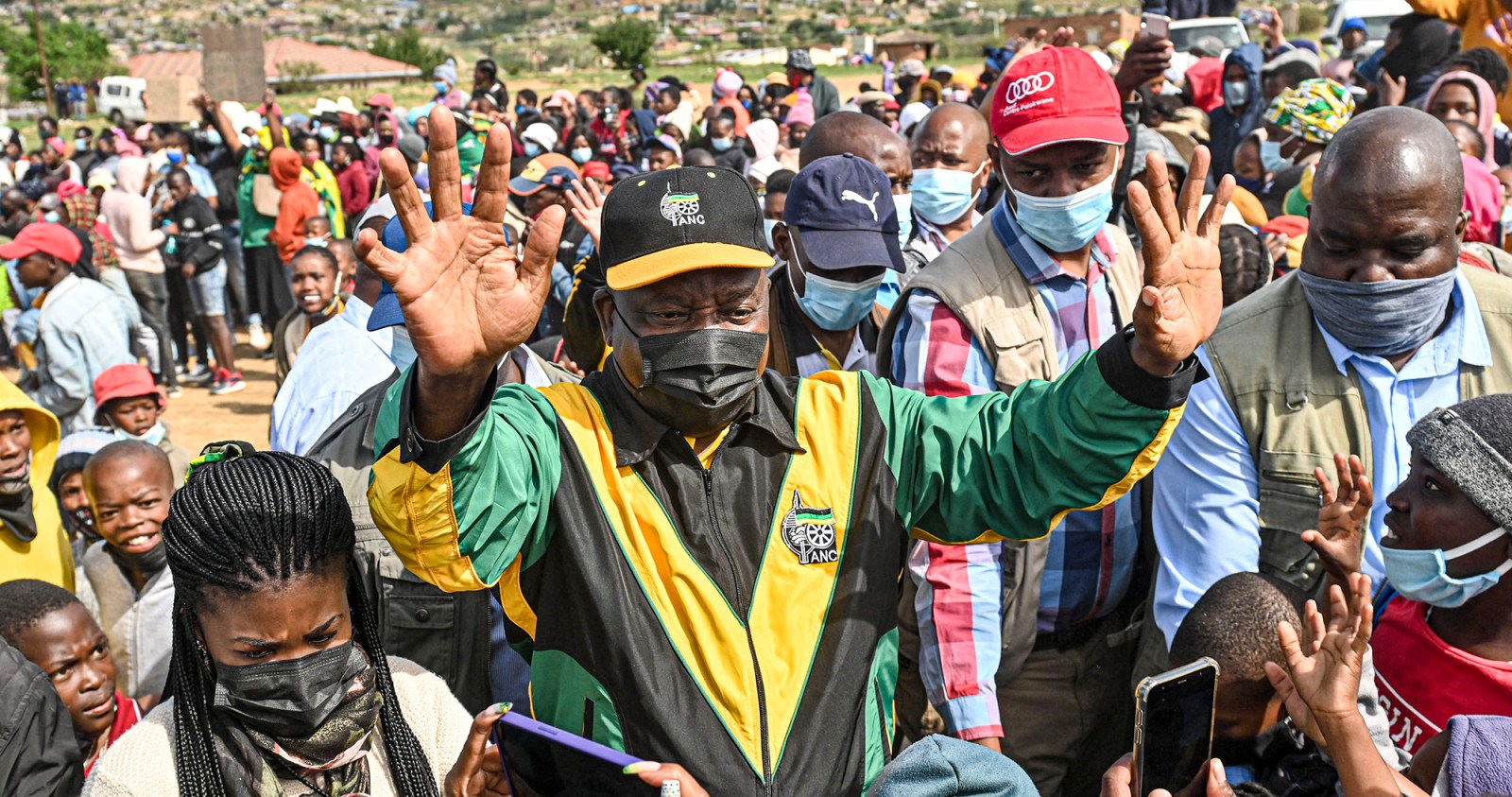 ANC president Cyril Ramaphosa gestures to the crowd during his election campaign on 17 October 2021 at the Makwane Sports Ground in Phuthaditjhaba in the Free State. (Photo: Lehlomelo Toyane)

ANC President Cyril Ramaphosa followed in the footsteps of an army of his party’s national leaders, campaigning in the troubled Maluti-A-Phofung Local Municipality in the Free State amid fears that the ANC is losing its grip there.

Homes with asbestos roofs make up about half of the dwellings in the potholed street where Paul Masoeu lives in Phuthaditjhaba.

Masoeu is running as a candidate in the local government elections in the Maluti-A-Phofung local municipality’s Ward 25. He’s running for the MAP16 Civic Movement, which is made up of former ANC members who were fed up with what they said were corrupt practices by party leaders.

“This roofing is no longer in good condition, and people are getting sick,” he said. “Vusi Tshabalala [the former mayor] and Ace Magashule [the former premier] saw an opportunity of making money. That is the [court] case they are attending in Bloemfontein. It started here, you still see the asbestos, it’s all over here.”

Magashule’s case is up in the Bloemfontein High Court again on Tuesday. Whether he is guilty of eating the money or not, the asbestos roofs serve as a daily reminder to those who live under them that there is very little to show for the R255-million of tax money that was spent by the leaders they previously elected.

The same goes for the water and electricity infrastructure here, although, seemingly miraculously, all the lights were burning on Sunday — even while the sun was out — as President Cyril Ramaphosa and his team rolled into town to campaign.

Masoeu said it is rare for the electricity to be working here at all.

As of 31 March, the municipality owed Eskom R5.9-billion after not paying over the money that it collects from the residents to the energy utility.

Water and power outages, along with the asbestos issue, were raised persistently by people when Ramaphosa addressed them at various small community rallies in the municipality. Jobs, litter and illegal rubbish dumping were other issues.

The ANC is going all-out to retain the municipality and has deployed some big guns here for the past couple of weeks. Deputy President David Mabuza spent a number of days here shortly before Ramaphosa arrived for his campaign.

Some opposition members reckon their voters can push the ANC to below 50% on 1 November. Judging from anecdotal evidence, however, people are eager to vote and turnout could be good — which could count against the ANC in a municipality with such high rates of dissatisfaction.

The ANC presently holds 37 of the 69 seats in the council, with 10 in the hands of independent candidates who were expelled when they sided with the opposition to oust Tshabalala as mayor in 2018 and who came back to beat the ANC candidates in the subsequent by-elections. They will now be running as MAP16, which has put up candidates in all 35 wards in the municipality.

The ANC’s interim provincial task team said three months ago the MAP16 councillors were welcome to return to the party, but Masoeu — who was an ANC member, but not a councillor before — said no effort was made to woo them. He wouldn’t return any way if the party asked him, Masoeu said.

ANC leaders have also had to contend with a long list of independent councillors who didn’t make the ANC’s list, but who were allegedly encouraged and incentivised by Tshabalala to run as independents.

Tshabalala was recently suspended for this from his position as Chief Whip in the legislature, where he was promoted after being kicked out as mayor.

The people of Phuthaditjhaba are spoilt for choice, and they’re well informed.

Along the main road that runs through the area — located in the spectacularly scenic foothills of the Drakensberg — the posters on either side attest to a wide range of choices: anything from the big three (ANC, DA and EFF) to MAP16, the Inkatha Freedom Party, or Hlaudi Motsoeneng’s African Content movement.

The choice also attests to how bad the infighting is in the ANC. The party failed to register candidates for 16 wards in August before the Electoral Commission reopened registrations following a high court order.

Social Development Minister Lindiwe Zulu was part of the ANC’s leadership delegation in the province to deal with the infighting members.

“We are trying to make them aware of the fact that being in the ANC in a national way, there is an advantage of being national, local and provincial government,” she said, apparently hinting that the ANC is trying to lure errant councillors back with jobs.

It’s unclear whether residents were convinced that the ANC’s choice of public representatives is good at all. The local mayor, Masechaba Mosia Lakaje, and the Free State Premier, Sisi Ntombela, were booed while flanking Ramaphosa on stage during community meetings.

Ramaphosa, on the other hand, was given a chance to talk.

He also promised that these new councillors would be young.

“We believe him [Ramaphosa] that he will change things, so the mayors must just listen,” said a woman who wore an ANC T-shirt, jacket and cap, with teachers’ union Sadtu branding too.

Still, she doesn’t blame the mayor for not performing. “I think she just came in a municipality that has collapsed, so it’s very difficult to change something that has already collapsed,” she said. DM