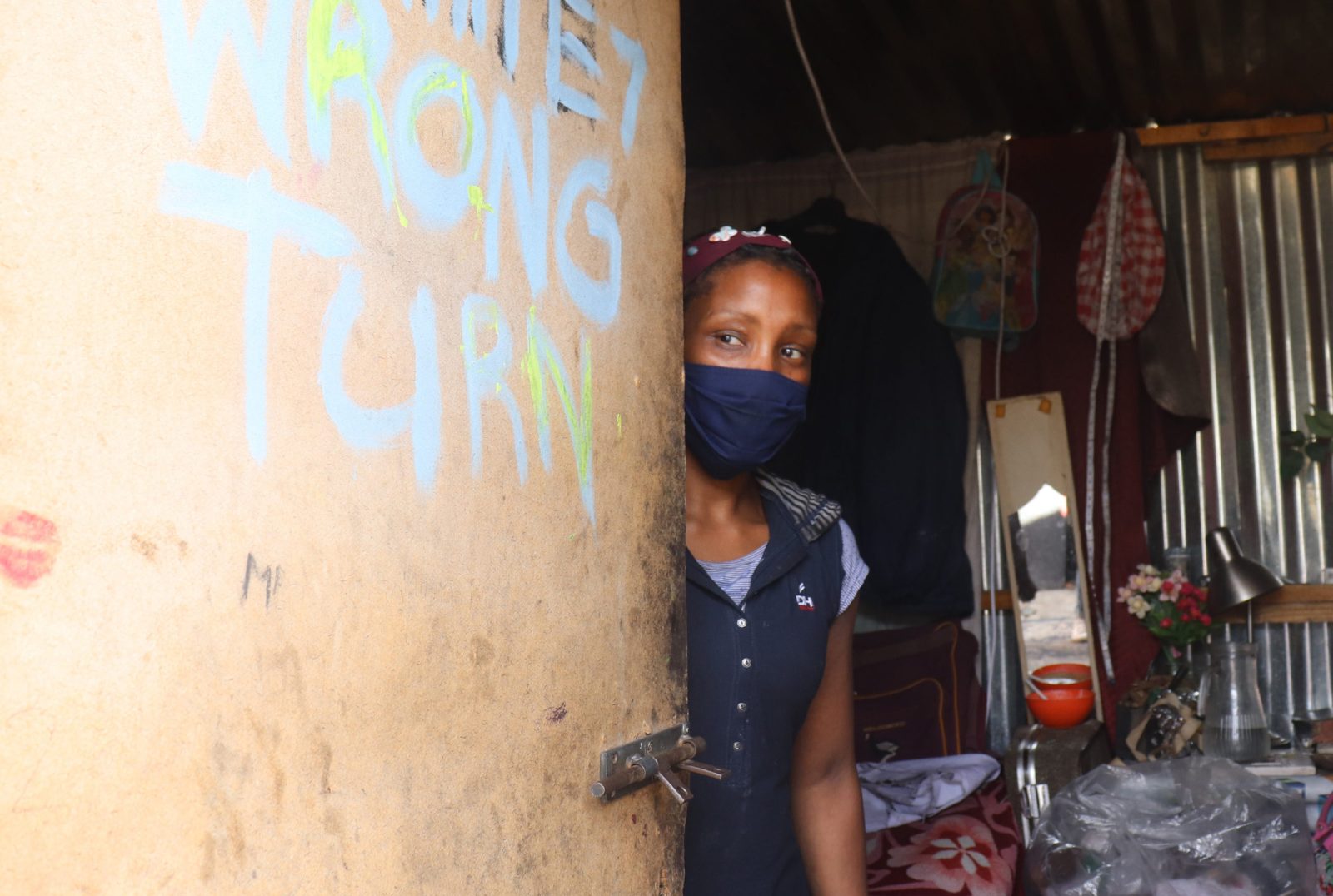 This year, two women from Delft won’t vote in the municipal elections for different reasons: one is frustrated by politicians’ empty promises, while a loan shark has her friend’s identity document. With Delft’s high crime and unemployment rates, they hope a new councillor will help them with housing.

A group of people are standing at The Thichers Centre in Ward 13, Delft waiting to be served this morning’s breakfast of porridge. As women, children and men wait to be served, several gunshots ring out nearby – but they barely notice.

At the centre, 37-year-old Arlant Williams said living in Delft is “a battle… it’s a big challenge of survival”. Williams has lived here for five years and now lives in an informal settlement behind the centre with her three children. 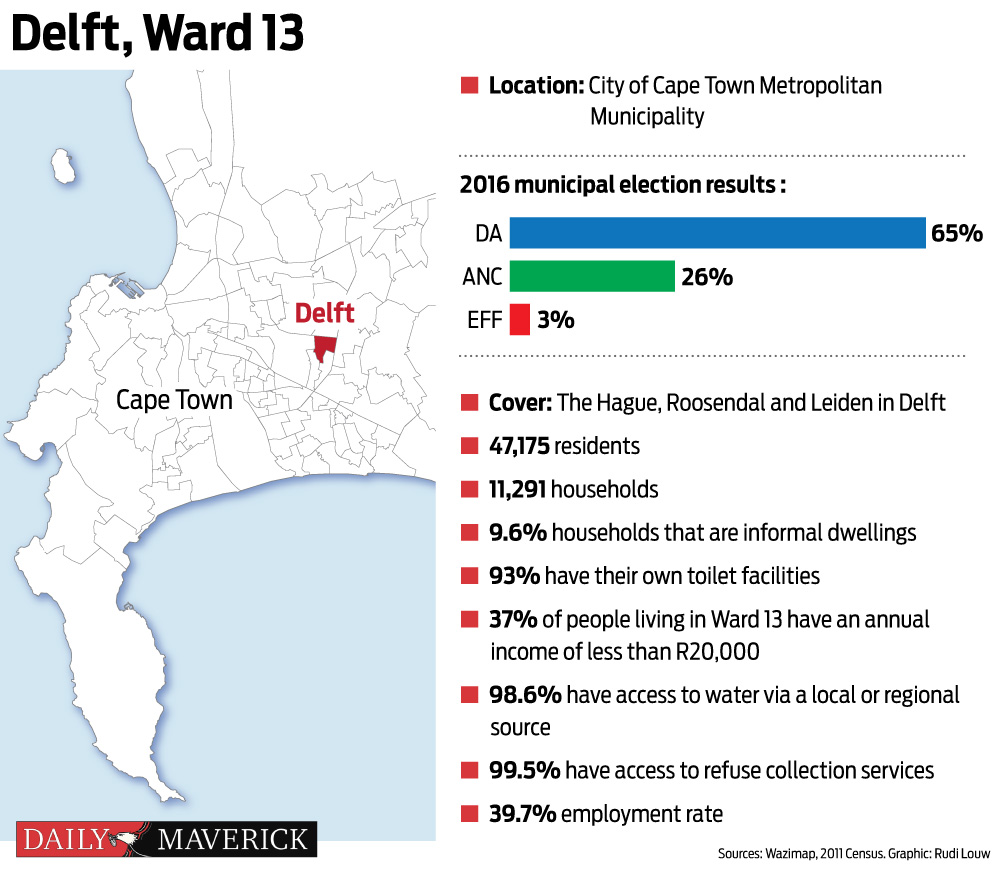 Ward 13 includes Roosendal, The Hague and parts of Leiden in Delft, one of the first mixed-race (although only black and coloured people) areas of the Cape Flats built by the apartheid regime in 1980. Today, Delft often makes headlines for its high crime rates. According to the latest crime statistics, 58 murders were reported between April and June 2021 – the country’s fifth-highest reported murder figure in the reporting period.

In addition, the area has an unemployment rate of 39,7%, recorded in the last census (2011). Over the past few years, numerous informal settlements have sprung up, including Williams’s bright-red shack behind the centre.

Williams says living in the small informal settlement is difficult, with no running water, no access to sanitation and no electricity. The centre used to provide borehole water and electricity for the residents of the settlement until it could no longer afford to.

Walking in the settlement, Williams points to a bright-green shack where a man is sleeping after working at night. The settlement sprang up around a shack erected five years ago. Now it comprises mainly women and children, including Williams. Rent here is between R350 and R600, depending on the size of the family. There are currently 50 shacks and about 300 residents. There is no water or ablution facilities. They have to walk about two streets away to another informal settlement to collect water from a tap, or ask others to collect it for them. To relieve themselves they need to ask neighbours to use their bathrooms or use buckets.

Williams tells Daily Maverick that while they have no water, electricity or sewage collection, it is a safe place to live – the original occupier closes two entrances to the settlement at 10pm, the settlement’s curfew.

Williams says that despite matriculating in 2003, she could only find work in fast-food restaurants selling fish. In 2020, she was forced to move into the settlement when she could no longer afford rent. Previously, her children’s father paid their rent, but he died three years ago and she has been moving around ever since. She is also unable to work properly owing to arthritis in her hands. “It’s too painful to comb my child’s hair.” Williams now depends on two social grants to survive.

Her friend, 40-year-old Angeline April, has a similar story. She lived in the informal settlement until two months ago. She rented a house near the centre, but the owners wanted it back and she had to leave with her 14-year-old son who has Lennox-Gastaut syndrome, a rare form of epilepsy. She was self-employed, selling handmade beds and mattresses from the house. Now, without a fixed place to stay, she cannot restart the business. She has moved to a backyard dwelling where she pays R400 rent.

In 2018, April registered on the housing database, hoping for a home for her and her son. Since she is unable to work and needs to support her son, April is “obligated to go for a grant”. For the past three years they have been living on a social grant.

April tells Daily Maverick that if she had a home of her own, she would restart her business to support her family.

When asked if there were challenges in Ward 13, both women point out that there is “no work”. April adds: “That’s why we fetch porridge and we sell stuff to eat.”

The centre provides a lifeline to about 700 people, including children, with meals including breakfast and lunch. “In the morning when I don’t have porridge I know I can come here and get porridge,” says Williams. On days that she has porridge, she won’t come, so: “If you see me here, you know I don’t have.”

The centre is run by Farida Ryklief, who Daily Maverick met this year at the launch of a food garden on the premises.

Among boxes of donations from mayor Dan Plato’s office, she tells Daily Maverick about the people living in the settlement who lost their homes, bonds and jobs during Covid-19. “It’s actually sad.” Nobody is on the ground to witness the number of job losses, home losses and unemployment during Covid-19, despite rules around firing or evicting people during the pandemic, she says. Families – mothers, fathers, grandparents and children – collect meals from the centre.

“It isn’t druggies, it’s decent people – but even if it’s druggies, we feed people,” says Ryklief.

She adds that she has given food parcels to people living in the settlement, only to realise they do not have electricity to cook. “That’s how dire the situation is.”

Returning to the upcoming elections, April says she cannot vote because a money lender has her identity document. Williams has never voted and she says that won’t change this year because “you never see what they [politicians] can do for you”.

April says no politicians have visited them, only people checking voter registration details. Williams says politicians make empty promises, but she might vote one day.

Williams and April don’t know who their ward councillor is, but say that after the election the new councillor must introduce him/herself. “I want to see who it is,” says April.

April, Williams and their friend, Gerenice Maart, all want the same thing: a house.

“I don’t want to stay forever in this hokkie (shack),” says April.

Ward 13’s incumbent councillor is the DA’s Michelle Adonis. Daily Maverick could not reach her as she was in a meeting, and she did not respond to questions by the time of publication.

ANC candidate Sibongile Klaasen said the biggest problems in the community were high crime rates and unemployment. If elected, she would make sure residents, including those in informal settlements, knew who she was. She would task community leaders with informing residents about who she was and what she could do for them.

“I don’t think people know about the hokkies,” says Williams, adding that people were only aware of the older, more established areas in the ward.

“This R350 I pay now for rent, it’s making me very financially disrupted,” she adds.

“With three children, I’m feeling claustrophobic, for a long time I don’t feel like being at home. I just want to be out. I can’t even find my clothes… it’s too much, but I don’t have a choice,” she said. DM

Foggers have ‘no role’ in preventing Covid, but IEC is still sending them to all voting stations – at taxpayers' expense

The Kingmakers (Part Two): The key parties in power plays